During this years’ cool and wet springtime, which had seemed to last forever, I was wishing for a nice hot summer.  What we got then is sweltering heat, scorched lawns, blistering tar on the roads and the central air-conditioning running even at night. Regardless, I still love summertime and enjoy being outdoors. 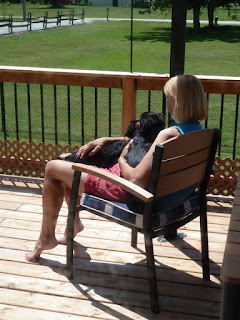 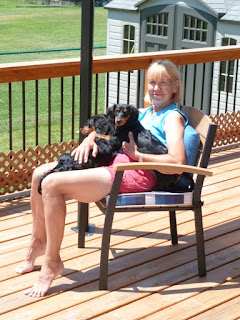 So I have been spending some time in the garden, working on a little garden-art project, and creating a fairy garden at a small corner in a flowerbed, that was inspired by Kathy, from "It's about time"  who had created a cute fairy garden in a nice flowerpot.  All those little things you see in my fairy garden were home made! Meanwhile, Benno disappeared in the camper where he immersed himself in a bunch of wires, cables, plumbing and woodwork. 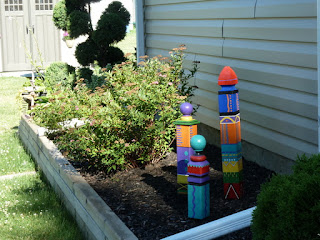 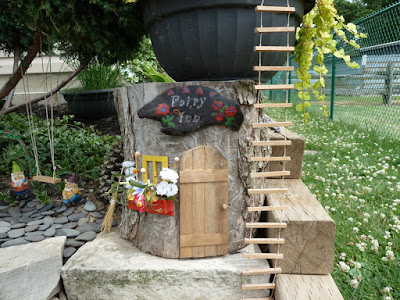 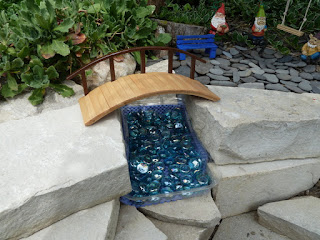 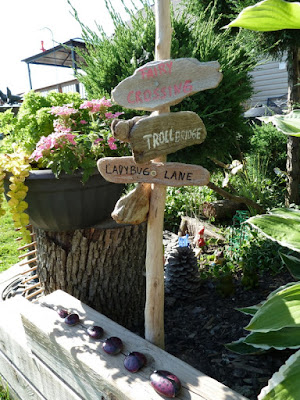 Our new camper has not travelled anywhere yet since we parked it right next to our driveway by the house.  However, it functions great as a second guestroom, or rather guest suite with all the comforts one can wish for.  As is the case with all new campers, there are some modifications and additions one has to do to make it your own.  As an example:  there were no towel-bar holders per se, we found only hooks on the walls in the bathroom of our trailer.  It was fun shopping for those including a full-length mirror (IKEA) for the inside of the bathroom door, new towels, bath rug etc. Also the faucet went out to be replaced with a taller s/s faucet where you can actually hold your head under and that swings to the side. But Benno’s improvements went way beyond those enhancements. 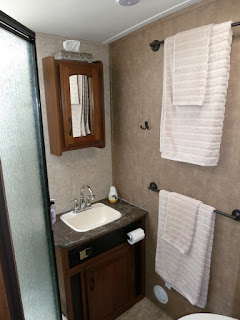 You might recall our upgrades on the previous camper and some were repeated once more.  The camper came with a wet cell deep cycle battery, group 24 with 65 amp hours.  My technically inclined hubby improved the capacity by changing to deep cycle AGM, group 24 with 79 amp hours and added two group 31 AGM deep cycle batteries with each 105-amp hours.  Additionally, he managed to find space for a 1000 W pure sine wave inverter, which we had as a spare from our cruising boat.  This enables us to perhaps use the TV without running our portable Honda generator while being parked by the roadside overnight on route or, use some of the small appliances. 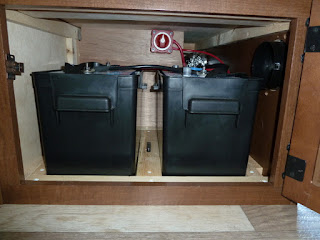 The workers at the camper manufacturers down in Indiana don’t necessarily concern themselves with space saving ethics when installing equipment in the locker and cabinet space. So while Benno ran wires from one end to the other in the camper and searching for space to install the new batteries, he managed to tidy up some of the wiring jumble and moved pumps, hoses and valves to make space more usable. Next on the agenda came the installation of the Halo Wifi Extender (wifi signal booster).  This was an easy and quick fitting and the supplied router works like a charm. 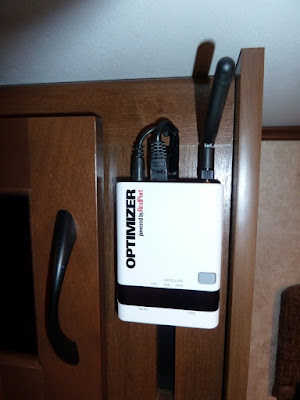 My concern was space in the kitchen.  The countertop held a large, standard Permalux Acrylic Polymer sink and underneath in the large corner cabinet there was only one tiny shelf up front with a huge empty space behind it. We ripped out the top, sink and faucet and ordered a custom built solid surface countertop like we did in the previous camper.  Benno got to work on the now large empty corner cabinet where he straightened out plumbing for the boiler and the wiring from the trailer’s power center to the receptacle for the power cord. In the process he gained space for more shelving to store pots, frying pans and other things and gain room for our vacuum cleaner. The result is fantastic.  I have two large shelves with space even for a decent size garbage container. 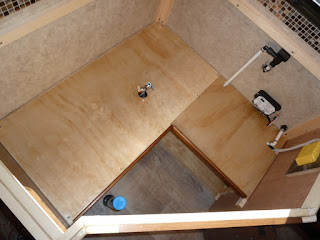 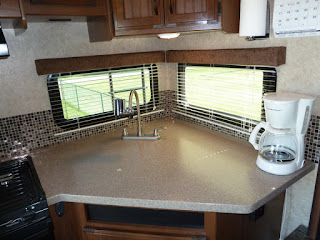 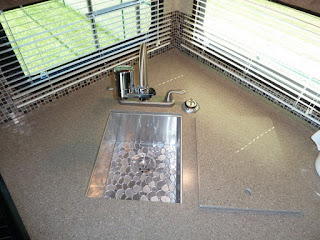 Actually, Benno is quite a good woodworker and not a wood butcher. The new countertop holds a smaller than before, but good-sized stainless steel sink with cover and new s/s faucet with an "Instapure"  active carbon water filter.  We also have a large "Camco" active carbon water filter mounted outside on the city water intake to remove the chlorine taste.  The mounting bracket was purchased at a Camping World store stateside. Some southern states chlorinate their water supply strongly. Believe me, our coffees taste good!  Then some of the upper cabinets got additional shelves built by Benno to my specifications but I always volunteer at varnishing every new wood creation. 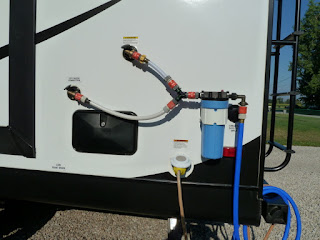 Here at home our two doxies sleep at night in a portable kennel.  To save space in the camper to accommodate the dogs, we modified one of the built-in compartments underneath our queen-sized bed.  There are compartments with 2-tiered trays for shoes on both sides under the mattress, a long compartment at the head-end and a middle compartment towards the foot-end. We enlarged the middle compartment, sealed it with water-resistant West Epoxy (just in case, one of the doxies has a liquid accident), painted it and added a nice dog bed cushion. In the front we cut a square opening for access (which can be covered with a door if we sell the camper) with a Makita Plunge Router and added a sliding wire frame (divider borrowed from my house chest freezer) to close the opening if needed.  The dogs love it in there and while testing the arrangement on several night sleepovers there were no complains from the dogs. 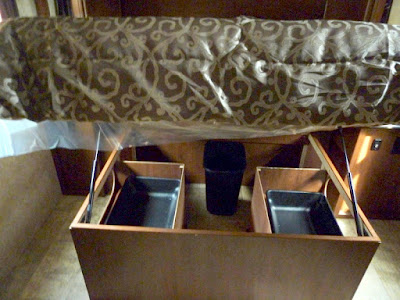 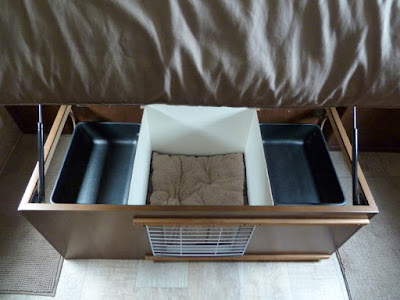 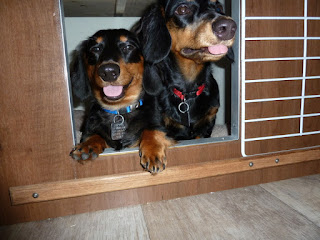 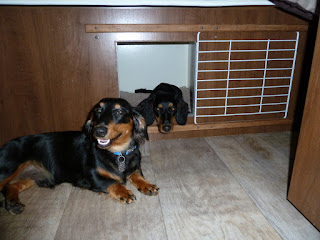 When it’s not too hot outside we love to take our bikes for rides around our country roads.  Both bicycles we outfitted with a square basket in front to carry the dogs. They wear harnesses, which clip on three sides to each basket so they cannot jump or fall out.  In order to take the bikes with us on our next trip we have purchased a bicycle carrier that mounts either on the truck hitch or the trailer bumper-hitch. 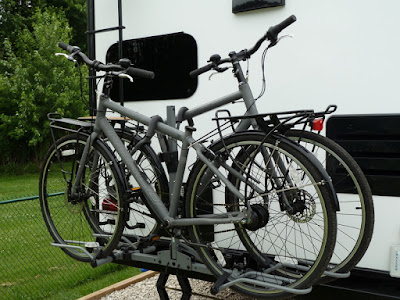 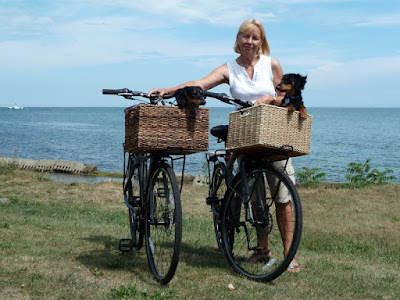 Although we haven’t travelled anywhere yet, we have spent some time in the camper and feel very much at home there. 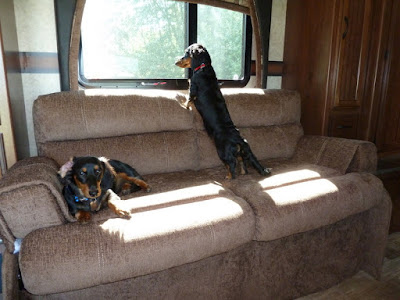 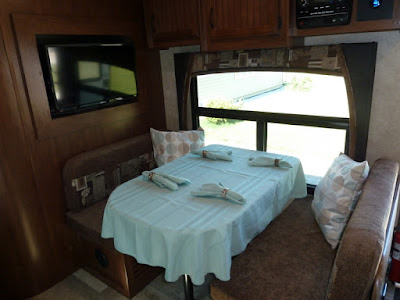 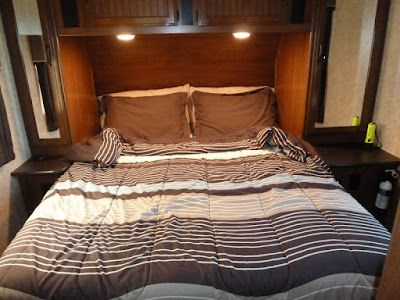 Posted by Marlene Klopfer at 17:29