Benno could not hold off anymore and got our power dolly "Parkit 360" out of the crawlspace of our house. Reading up on fellow RV travel blogs and seeing that everyone is heading south right now makes us very travel itchy.
“I better do it now and not when we have some snow on the ground,” Benno said. The weather forecast indicated that there could be some snow in the coming weekend in Northern Ontario. Hmm, but we live in Southern Ontario, Canada’s most southern point right across from Detroit, Michigan and might not see any snow for many weeks to come. Haha, there was no holding back of my hubby. It was the starting gun to get off the couch and turn the White Hawk 24 travel trailer around on its resting place next to the house. When it’s done, the truck can be hooked up in a flash and we can be on the road south in minutes.

We store the power dolly during the summer down in our crawl space under the house. 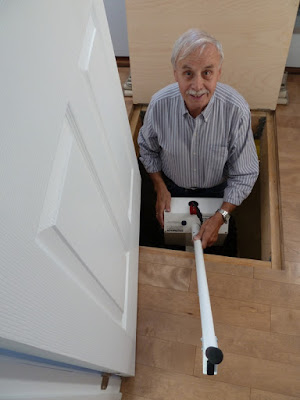 We purchased the “Parkit 360” power dolly in 2014 to be able to maneuver the trailer in tight spaces. The dolly is using the trailer’s 12 Volt battery power. 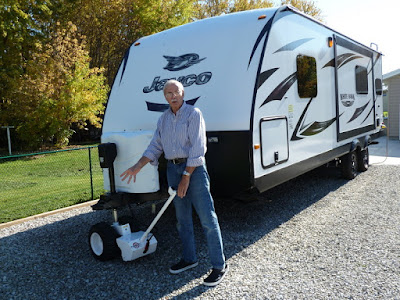 Here the Parkit 360 power dolly is hooked up 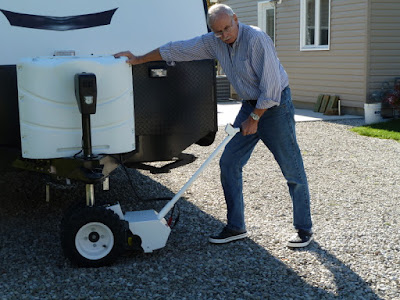 A very tight turn, no problem 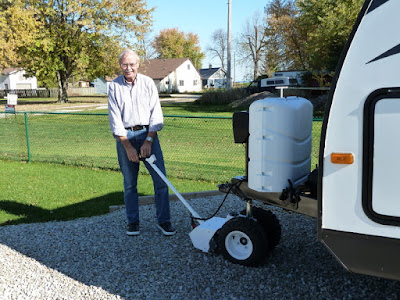 The trailer is almost in position 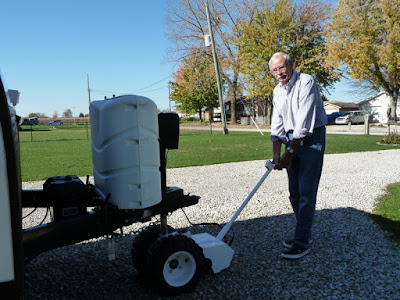 It steers with ease 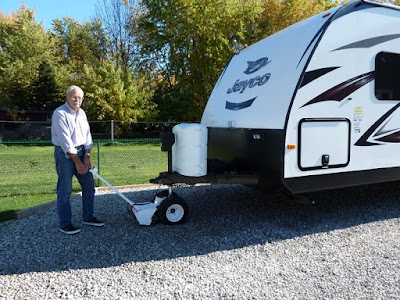 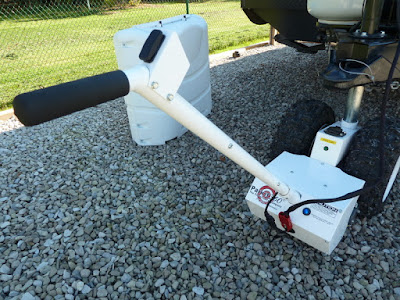 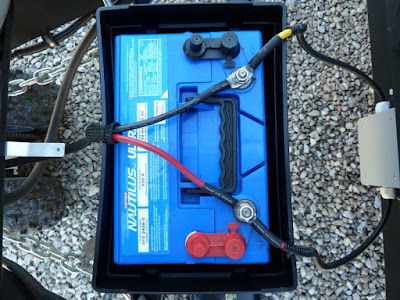 Our “Parkit 360” model can move a 10.000 Ibs trailer. In our case, the “White Hawk 24 RKS” weight empty is 5,210 lbs., this is very well in the capacity of the power dolly.
The dolly could almost turn a trailer on a dime. It is a very good engineered unit and made right here in Ontario in Carleton Place, a town close to the city of Ottawa. 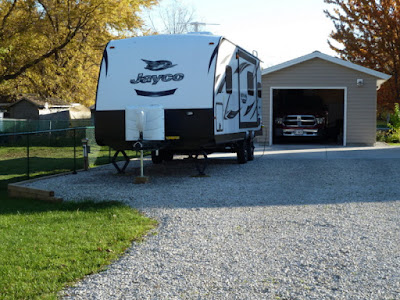 The trailer is ready to be hooked-up

The way we are parking our trailer during the summer months here next to the house, the hitch coupler is facing the garage. 180 degree to the picture above, the RAM truck could not accomplish this, only if it could fly back out straight up in the air, but with the “Parkit 360” it’s an easy task.

Posted by Marlene Klopfer at 15:42

Email ThisBlogThis!Share to TwitterShare to FacebookShare to Pinterest
Labels: He did it / using Power Dolly to turn the trailer