A week with Heidi

This past week Heidi, our oldest granddaughter, came to stay with us.  Just like with her younger sister Annaliese, Benno and I picked her up in London where our son met us at a rendezvous location for the swap.
Reggy and Elsa, our two doxies, were excited to see her and I am guessing they were looking forward to be getting more belly rubs and playtime with her. The long drive is tiresome for kids. To make the ride somewhat more interesting we were counting all the red cars and trucks underway on the Highway but after a while even that got boring.  Finally arriving home we three were hungry and the cranberry muffins waiting for us were devoured in a flash, then it was time for Heidi to head outside to explore. Luckily for us this past week the weather was super nice for outdoors activities. Taking advantage of the weather Benno wanted to add another layer of gravel onto the foundation for the new shed.  We drove to the pick-up location where Heidi got to see how the big backhoe dumped a full load of gravel into our trailer. Back home Heidi helped me to level the stone.  That truly was hard work and she didn’t just play around but showed how tough she is. 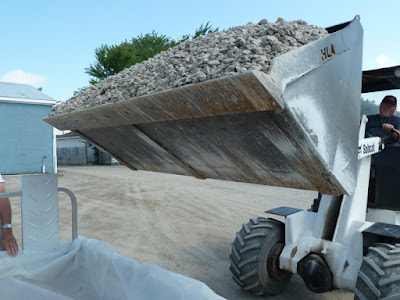 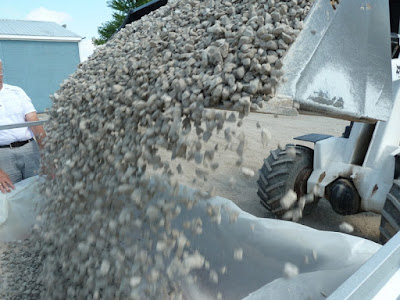 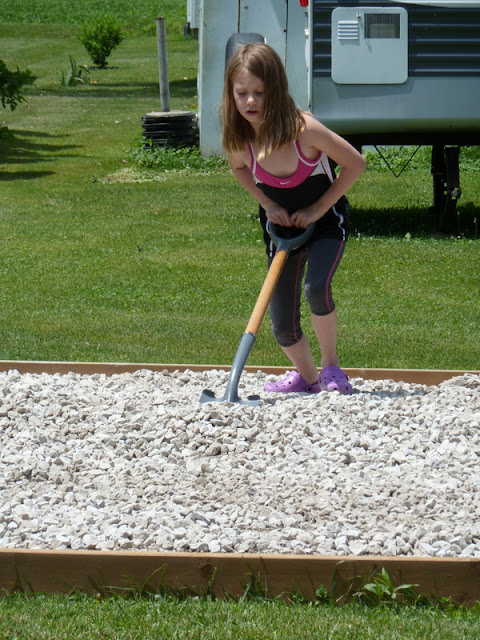 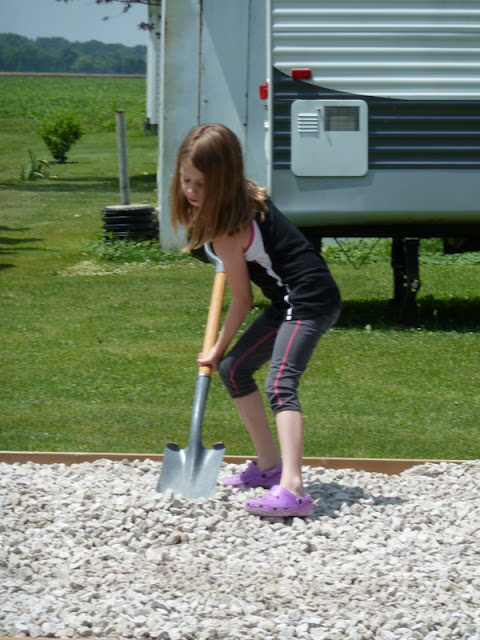 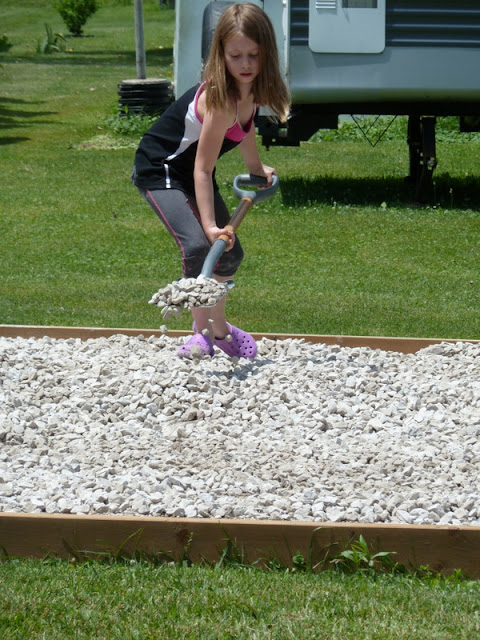 All that hard work had to be rewarded and a shopping trip was planned for the next day.  Before Oma took Heidi into town to buy toys and clothing for her, Heidi posed for a picture.  Upon looking at the photo we discovered she was photobombed by the owl in the front flowerbed. 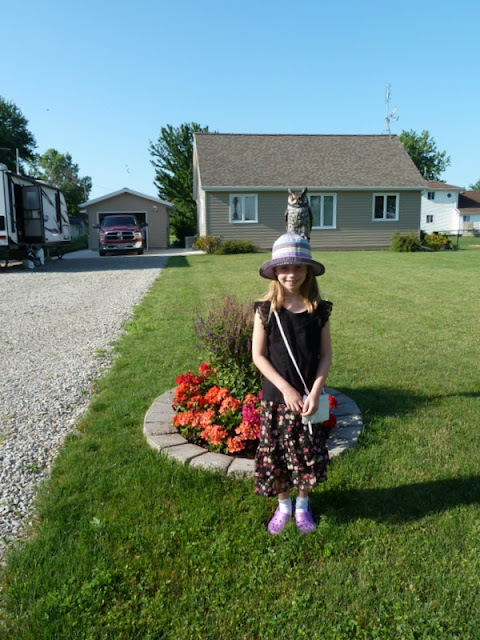 Ha, so Heidi thought she could also photobomb the owl! 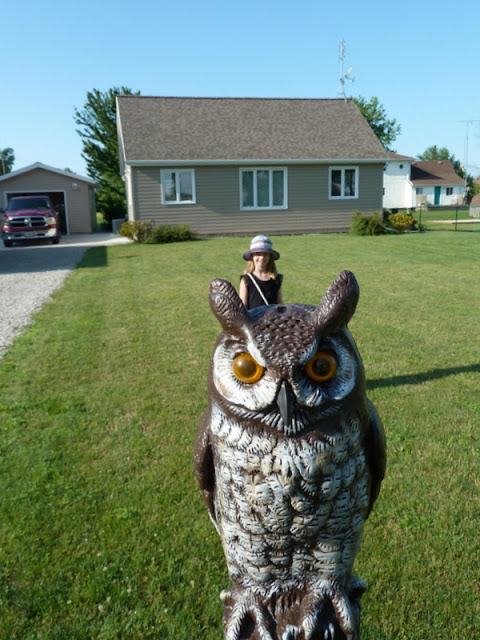 Lake Erie is approximately 300 feet/100 meters from our house with a small stretch of beach and a breakwater wall that is just so inviting for climbing and jumping off because the water around it is only a couple of feet deep. The pebbles, rocks and beach glass that can be found there are excellent materials to take home for some projects both of our granddaughters insisted.  So that is where we went almost every day. 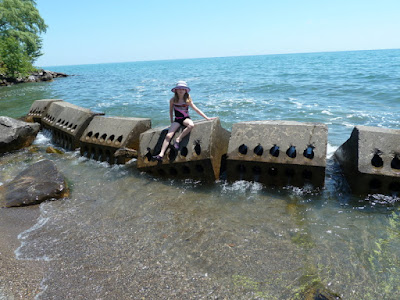 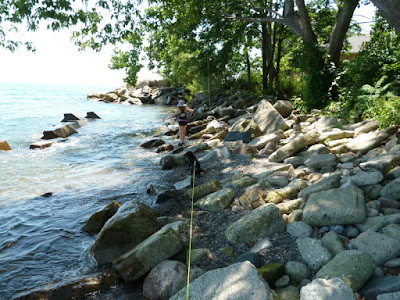 By the middle of the week the neighbor’s boy came to play there too.  Now take two 8 year old, likeminded kids to the beach add two dachshunds that like to participate in the action and you got the picture! 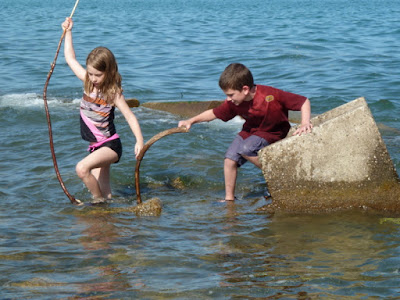 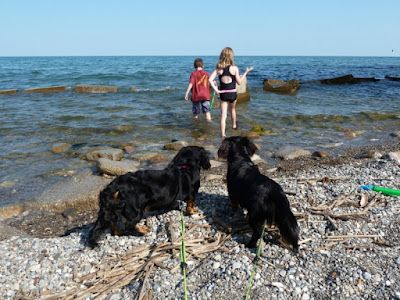 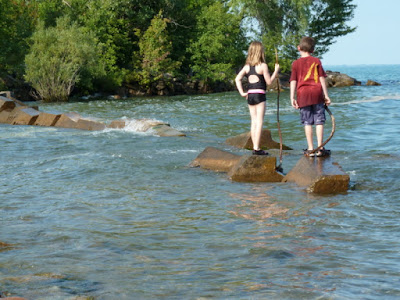 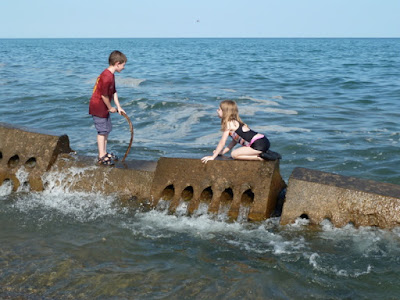 The week was filled with all sorts of activities indoors and out. Cake decorating was one of them because her sister did it too. 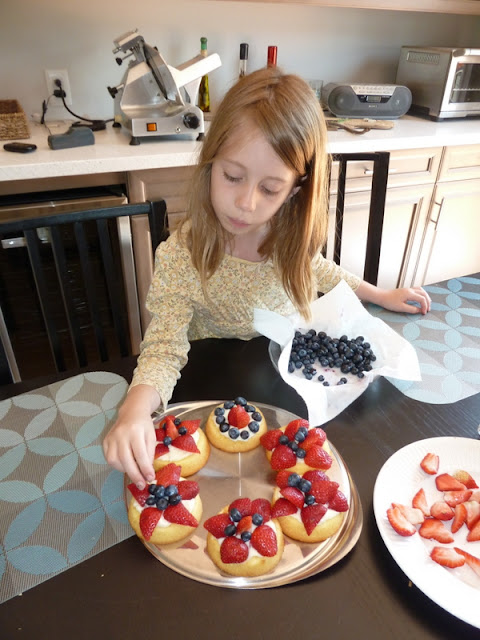 One day we had to get a new cartridge for our printer and while at the Staples store Heidi convinced me that the pot of modeling Clay she spotted there was something she really, really wanted and she would save it for when she got back to school in September.  Half an hour after arriving back home Heidi was working on several little Clay sculptures in her room. Sigh, I should have known. The clay started to show up on the carpet, door handles and glass table, it became a “Code Yellow” alert in the guestroom and bathroom. She and I proceeded to transfer all her creations to my shed where she could sit at my cardboard covered table to work.  She also made me three little mushrooms and a watering can for the fairy garden that turned out very cute. 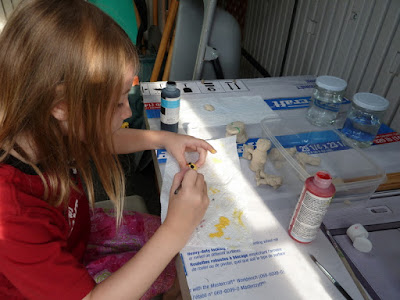 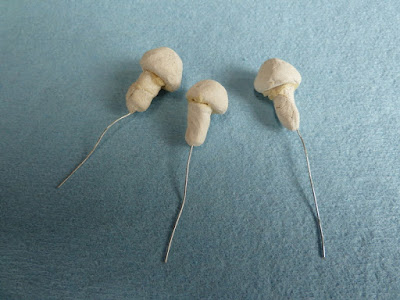 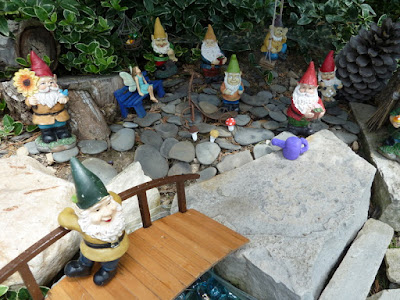 The next day most of the clay sculptures had dried enough to be painted.  However, the arms and the head of one of the little figurine men had fallen off, which had her in tears.  I promised to fix it later with my special glue. I left her alone for a little bit so she could paint the clay and rocks she had collected in vibrant watercolors. Meanwhile I clipped a few branches from an overgrown shrub.  When I went to check on her progress and saw that the shed door was closed I became suspicious.  What came next I’ll describe as “we had a “Code Red” alert that made us spring to action!” Heidi had found and used my "Gorilla Glue"  I won’t say anything more, only that I was rushing to get the bottle of nail polish remover and a big roll of Bounty Paper Towels, meanwhile Benno was rushing to the shed with a bottle of mineral spirit and a bundle of wipes.  In the haste of getting to the shed he stepped in dog poop placed there by “Hank” we think, the neighbor’s Golden Retriever. “Good heavens” 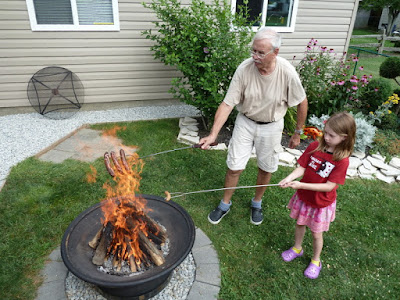 What are summer evenings without a fire to grill some sausages and make smores.  Heidi liked it so much that we repeated it the next evening to which she invited Dean, the neighbor boy. 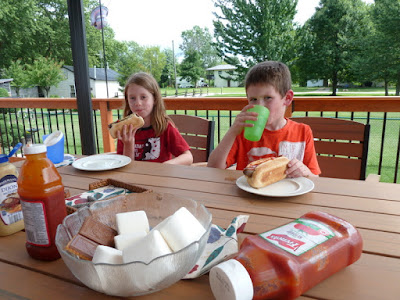 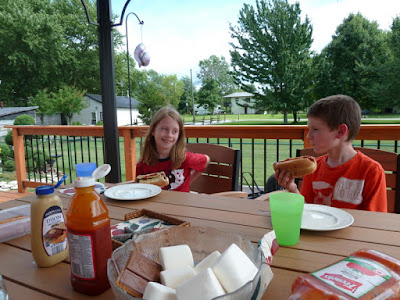 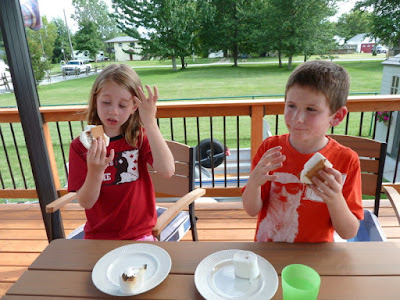 Yesterday morning at breakfast we were talking about pirates.  Benno told Heidi stories from our boating years and that the Coast Guard patrols the waters. I mentioned that Heidi doesn’t know what a Coast Guard boat is and that she had never seen one.  Well, we live 5 minutes from Hike Metal the factory that manufactures those boats.  So Benno jumps up from the breakfast table, pulls out the truck from the garage still in his pajamas and he and Heidi take a quick drive to the yard of Hike Metal, which is located right next to the fishing harbor to take a look at a Coast Guard boat. I am sure that if Heidi sees a boat with a vertical stripe on its hull she’ll now recognize it as a Coast Guard boat. 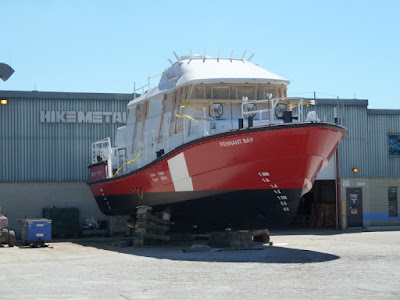 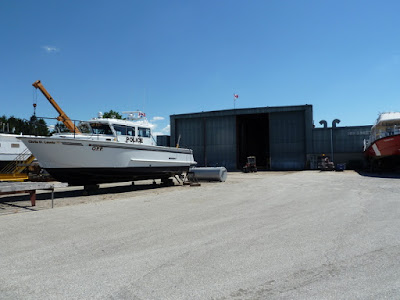 This week flew by in a hurry and it was good-by again with another drive to London.  There were Dominik our son, Maryann our daughter-in-law, Annaliese and Hans waiting for Heidi to drive to the cottage for a vacation. 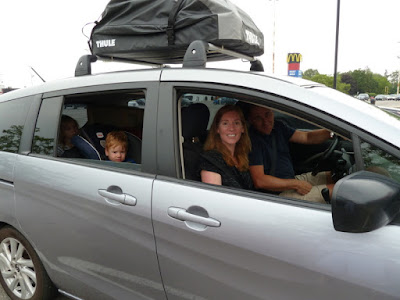 Hopefully they’ll have as much fun as we had this past week.
Posted by Marlene Klopfer at 17:20