Our pups are 4 weeks old today

Within the past week our Dachshund puppies have progressed quite wonderfully in their development.  All their senses are functioning and they started to walk. The brown female, I call her Chocolate, is the most advanced. She was the first to wobble around the whelping box while the rest still crawled on all four paws.  Now all pups are walking and climbing over each other. 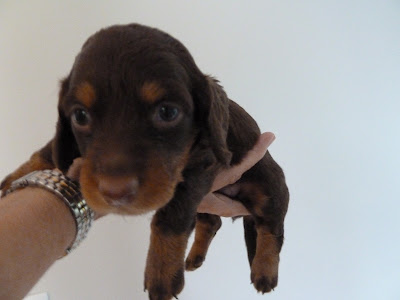 Last night when I came into the guest room I couldn’t believe my eyes. Chocolate was walking towards me with her tail wagging! What? She had been very interested in what was going on outside their den (whelping box) and I had observed that she wanted to climb out but I thought that was impossible for her because of the height of the opening. I guess not. This morning Benno quickly fabricated two small plywood slats to insert there where the sliding door goes.  We wanted Elsa still to have access to her pups and not close off the gate totally during the night. Elsa takes longer breaks now between feeding and cleaning them. She is very attentive but I guess its natural for the mom to let the little ones alone for long stretches, as they grow older. She still has plenty milk. A couple of weeks ago I purchased a regular baby bottle to see if I could assist in feeding the pups some of the formula we have.  It did work much better with this kind of a bottle but it really was not necessary for the supplement as all the pups seem to be well fed and they are steadily gaining weight. 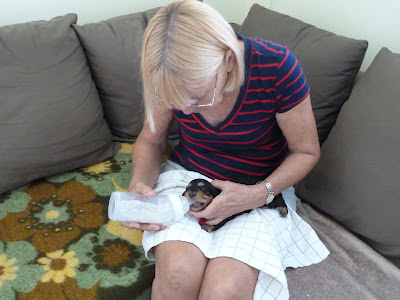 Producing so much milk does take a toll on Elsa and she is very skinny.  If you wonder if she eats enough, let me tell you of my efforts to keep up with her appetite. She gets 5 meals a day plus several snacks of dried chicken breast and Cesar Bakies.  In the morning I fry up a cup of lean ground beef mixed with half a cup of brown rice, half of a medium sized grated carrot and a half a cup of dry Royal Canin Dachshund mixture for her breakfast. At lunch she gets a cup of cooked chopped chicken legs with half a cup of each brown rice, carrots, cooked pumpkin and dry dog food, and that is repeated every 4 hours or so.  At night, if she is hungry, she gets chicken broth and dry Royal Canin puppy food.  There is a lot of cooking going on in my kitchen and the chicken legs I purchase with the skin on because they are cheaper than the already skinned and deboned chicken, but I skin them before they are put into the pressure cooker as I don’t like all that additional fat. The chicken I cook for 15 min. on high with filtered water. After that time the bones fall right off the meat and cutting the meat into small pieces is a snap. 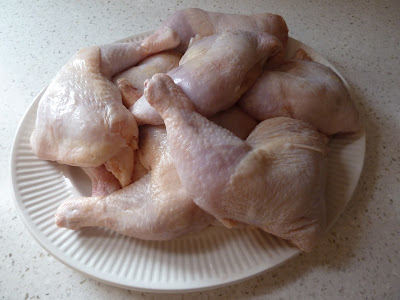 chicken legs with skin on 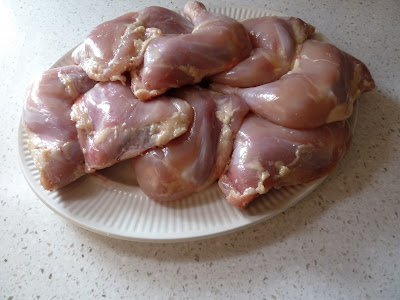 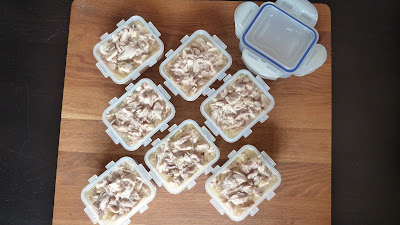 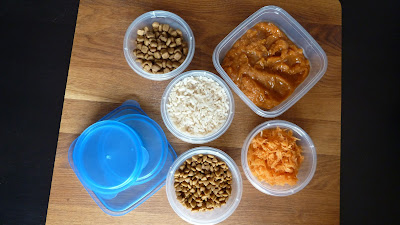 One of the little males, which my neighbour (the super girl Teresa) calls “Blue” has been on trips to her house for some outings. He must have had a very good time there because he sometimes barks (yes, he can already bark) in the den but then when I pick him up he seems to be content. The cutie pie already knows what he wants. 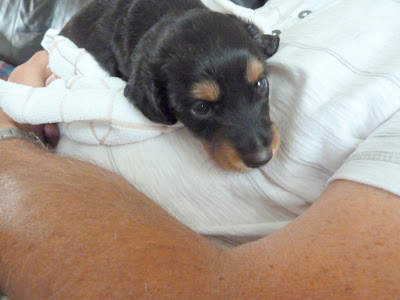 The pups’ teeth are coming out at various stages.  Yet again being more advanced, Chocolate has all her teeth and her incisors are quite sharp, but the other female, “D” also has a sharp bite when I put my finger in her mouth.  It must hurt Elsa when she feeds them.  Yesterday I mixed some of the Esbilac formula and poured it into a little dish. First the little pups didn’t know what to do with it, but after I stubbed their noses into the milk they started to lap it up. Yeah success, I guess it’s their instinct, so I wont need the baby bottle if they get hungry after being fed by mom. 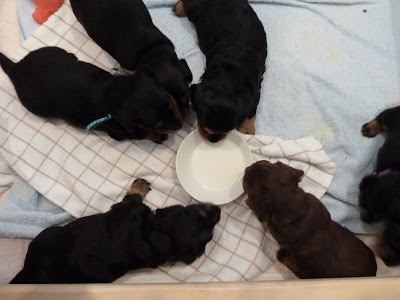 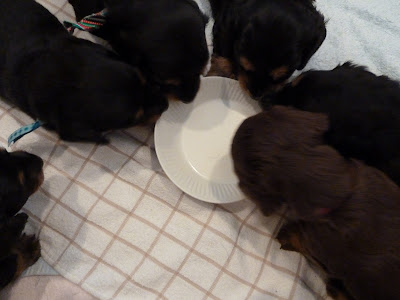 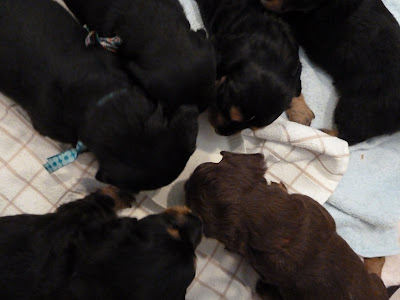 It is so cute to watch the little guys interact with each other and by the sounds they make, they are communicating, or talking to each other. They play bite each other in the legs ears or mouths while they crawl or tumble over each other until they get tired. Then they all cuddle up for a snooze. 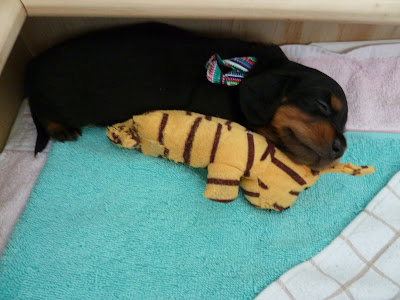 For the purpose of identifying the pups when they get their first shots and deworming done, we will give the pups temporary names to be put onto the health certificates. The pups have been wearing different collars and neck strings so we keep them apart.  I simply named them by the alphabet in the order they were born. The first pup born was a male and will be named with an "A", the second was “Blue”, then came the brown girl, which I call "Chocolate" followed by the tan and black girl "D", finally the last two males who look a lot alike will be named starting with an "E" and "F". Of course renaming is optional for the new owners. 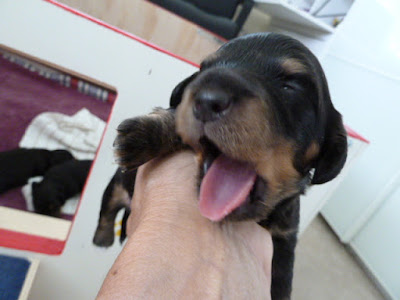 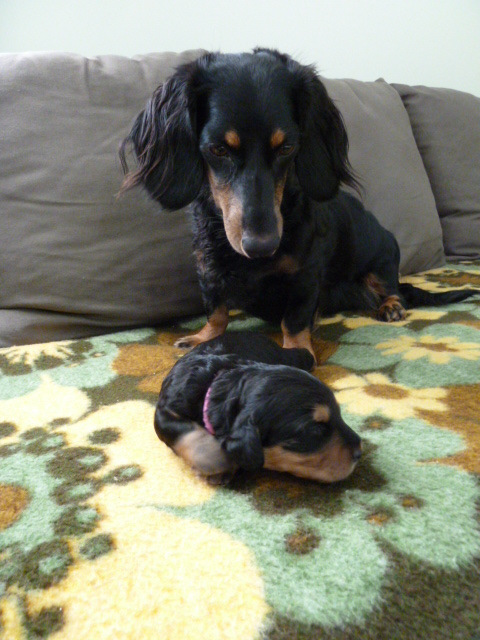 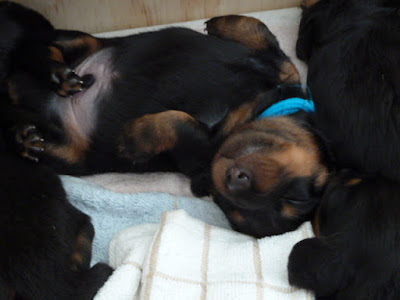 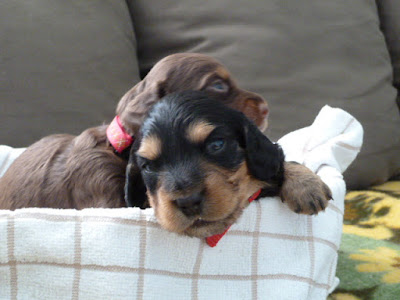 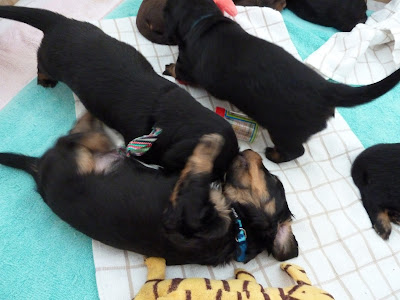 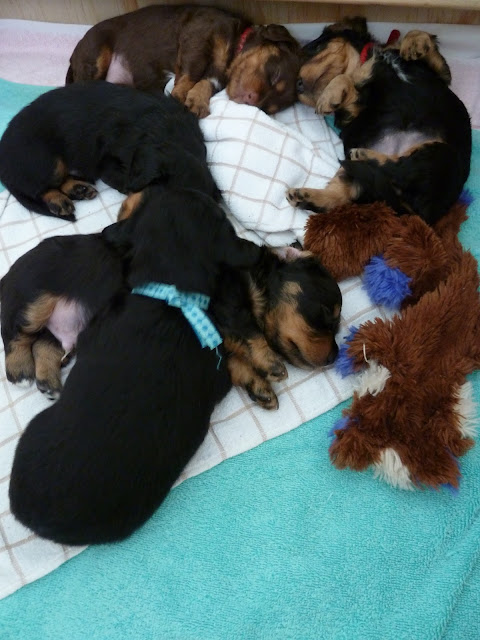 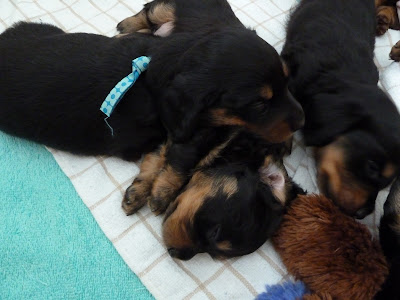 So for today I leave you with enough puppy overload.

Posted by Marlene Klopfer at 17:05