Did we drive to Egypt and back last week?  Maybe I can fool you with the pictures I took on our way to El Centro in California. Although Yuma has lots of shopping opportunities, it has no Aldi grocery store. However, the Internet told us that there was one in El Centro, a town approx. 75km/47miles west from our RV Park here at Winterhaven, CA, and it is off the Interstate 8 on which also Pilot Knob is situated. I needed a few groceries and therefore we thought we go and check out that Aldi store and also have a look at El Centro. It happened to be a bit windy the day we went and in hindsight we should have maybe reconsidered as soon as we spotted a road sign, “Watch for blowing sand.”  Did I mention it was windy?  Well, the way to El Centro cuts through the Imperial Sand Dunes, approximately 5 miles from our park that make you think you are in the desert of Egypt and the other picture looks like the Suez Canal, right! 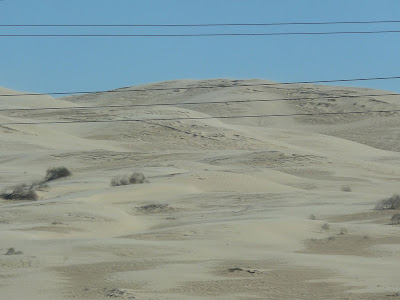 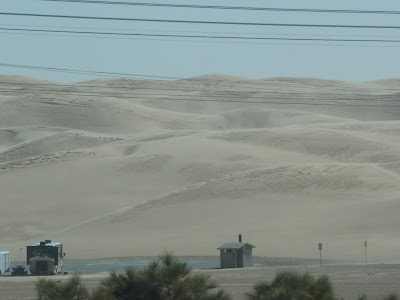 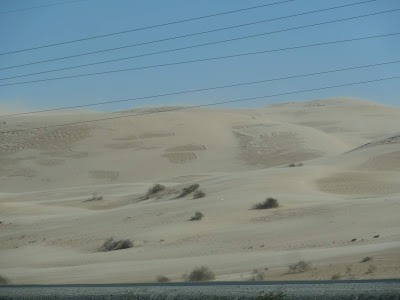 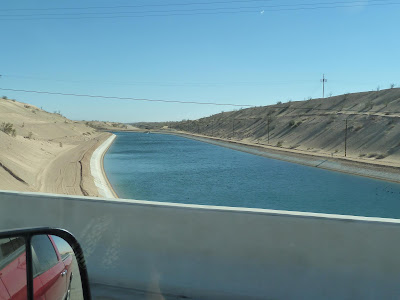 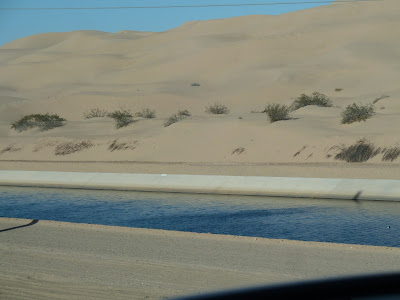 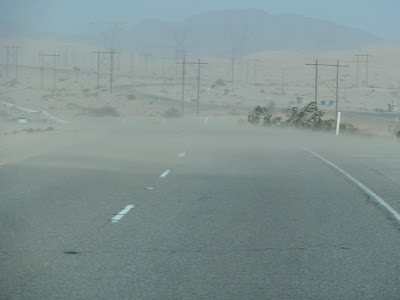 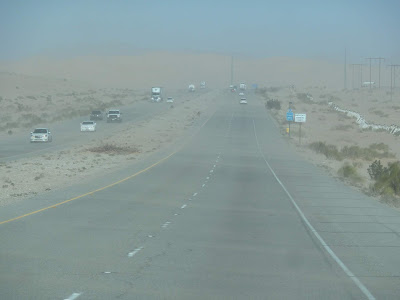 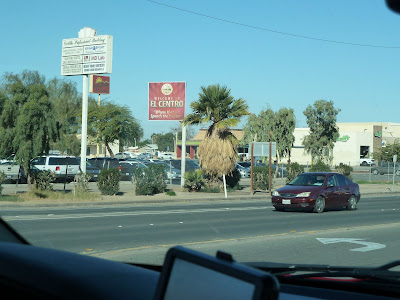 The welcome sign at El Centro said: “Where the sun spends the winter” and I guess they know what they are talking about.  We found the Aldi store no problem and selected some groceries that we hadn’t seen back in Yuma, but our biggest score was a “Christmas Stollen” (fruit cake) we drooled over, and it was worth all the calories, believe me. 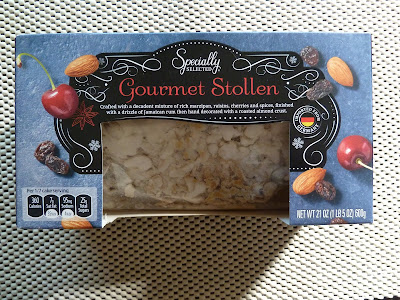 On weekends an outdoor Market Place in Yuma attracts a lot of visitors. We’ve driven by it a few times and thought we check it out too.  There are several large tents housing vendors with just about anything you can think of.  I cannot list all of them but took some photos so you can get the idea.  Did we buy anything?  Nope. 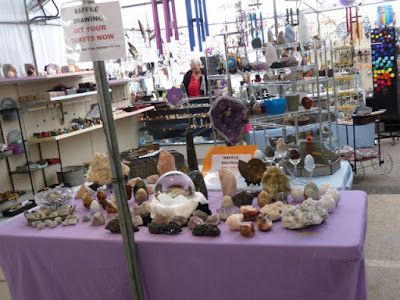 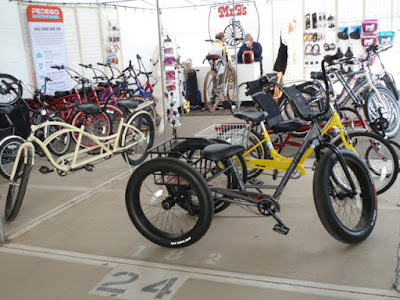 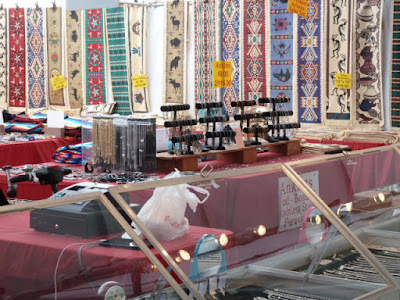 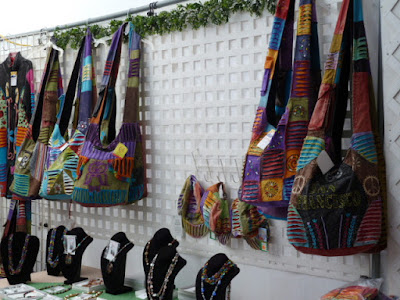 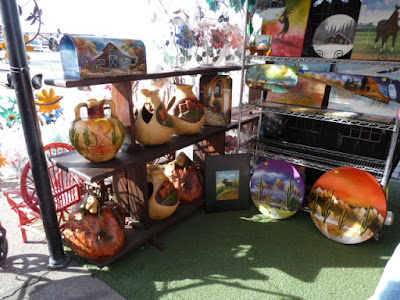 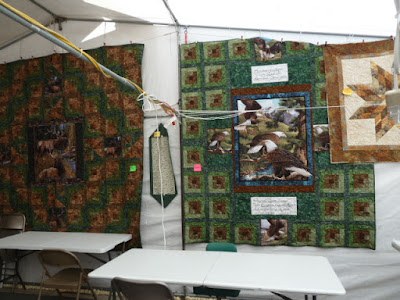 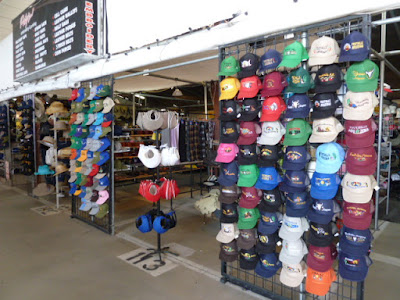 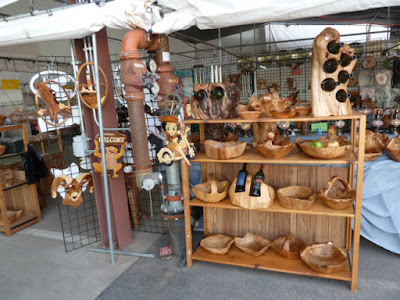 Last Thursday we got up shortly after 4 a.m. I had set my alarm for 5:30, but somehow Benno beat me to it, and before I knew it, we were both awake shortly after 4 a.m. and decided we might as well get up and have a leisure breakfast and then head out toward Quartzsite. The big RV bash or show was still on and to get a parking spot next to the big tent to avoid walking for more than a mile to the show, you had to arrive early. On the drive to Quartzsite we passed the US Army’s “Yuma Proofing Ground” to Benno’s delight and he could enjoy the view of some military hardware during the drive by. 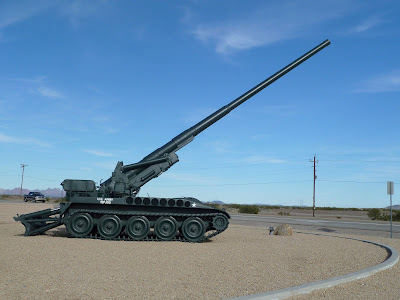 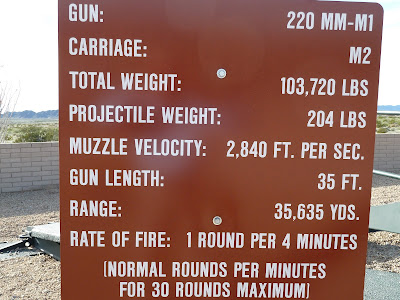 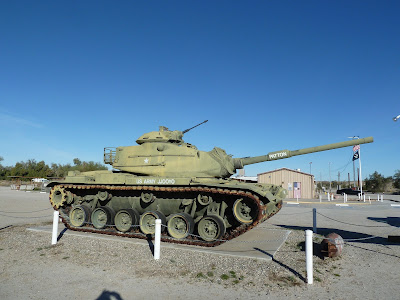 A little before 8 a.m. we parked in the first row almost across from the entrance and it was free parking.  For the next hour we sat in the truck and waited for the show to open and when it was opening time, the parking lots around the tent had completely filled up. For the next few hours we wandered around looking at RV stuff and such. But what amazed me were the many not having anything to do with RVing vendors.  To top off that list I took a couple of photos of the “pets” that were for sale right there and then. 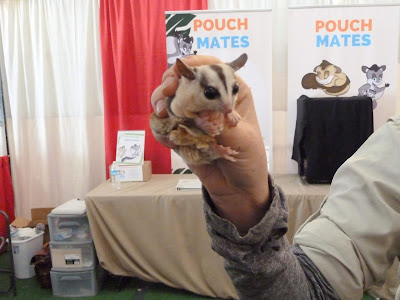 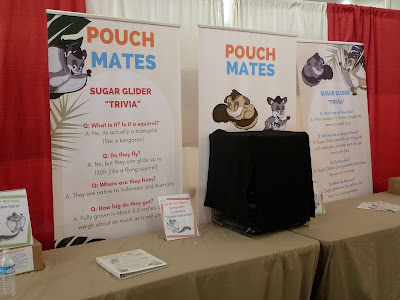 Once we’d seen enough and had purchased a few items for the travel trailer, we filled our tummies at MacD and then ventured out to find the group of Canadian friends that are camped out in the desert at La Posa South in Quartzsite, not an easy thing to do because of the vast area and the many RVs parked all over that place.  Smartly, Bill On Our Way and Patsy Patsy Is Chillin had a Canadian flag flying on a flagpole at their RV and that made our search of finding them a bit easier.  George and Suzie Our Awesome Travels were parked close by as well as Pat and Rob, all from Canada. Of course we said our hello and were invited to sit down for a visit. Time always flies when you are with a group of friends but we had another long drive back so we had to skip the happy hour and be on our way with the promise of a return visit in a couple of days for the “Bloggerfest.” 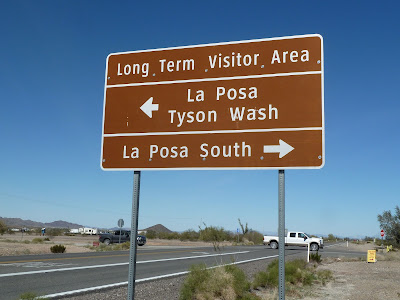 On Saturday we did the drive to Quartzsite again, however at a more sensible hour. Benno had decided to have a quick look again at a vendor for RV supplies at the show before we would be heading for the get-together at the “Bloggerfest.”  Of course there was no parking anywhere close to the big tent, so I dropped Benno off at the entrance and then circled the area in the truck for a while until we met up again.  Afterwards we looked at some beautiful cast iron artwork for sale by the road.  I have to say it was done beautifully and not as expensive as I thought it would be. We just couldn’t think of a way to transport these items back to Canada in our travel trailer. Too bad :-( 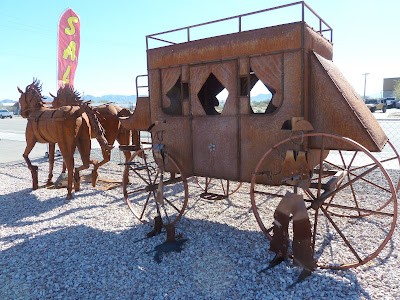 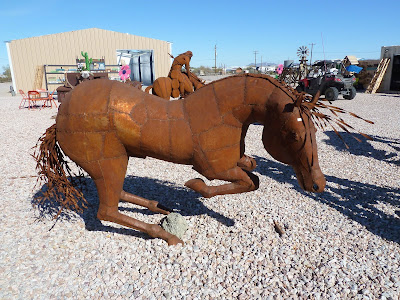 The “Bloggerfest” was held at a pavilion in the Quartzsite La Posa South area. We arrived early and introduced ourselves to John and Aileen, John and Aileen on the road who had arrived ahead of us. A few minutes later Rick and Kathy Its About Time rolled up and then one by one other “bloggers” arrived for the event. It was our first time attending this get-together since its inception 5 years ago.  This gathering is a great opportunity to meet the faces behind the blogs we read and to get to know all the folks that are out there RVing and then write about it.  We had a great time there and wish this event could be held more often and perhaps in different locations.  I took the liberty to add some blogs to the list on our sidebar of the folks we met. 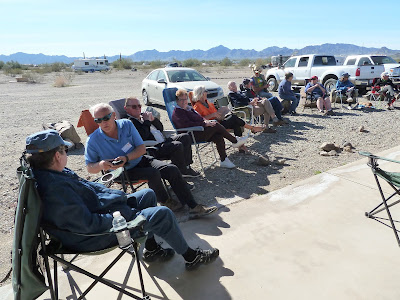 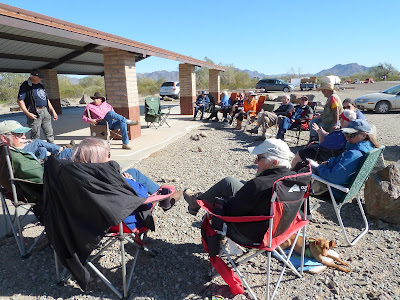 Thanks again for following our trip and I hope to keep you entertained.

Posted by Marlene Klopfer at 15:50