While I recap some of the highlights of our last year’s trip south, I cannot somehow capture the moment of excitement, joy or disappointments we experienced during our tour.  It’s different when I blog everyday and my frame of mind is transparent, but I try anyway.
Whereas the goal last year had been to escape our Canadian winter, I didn’t want to spend the whole time in one place. Although we liked Arizona a lot, the nights were colder than I had envisioned before our departure.  A bit of research combined with our love for the oceans and a promise of milder temperatures made us think of checking out the area of the Texas’ Gulf coast.  There are many RV parks in the vicinity of Harlingen, which indicates it is a popular destination and that was where we were heading.  Texas is a huge state and I wouldn’t mind to see more of it. The highways are in great shape and the 75mph/130km speed limit is an added bonus. 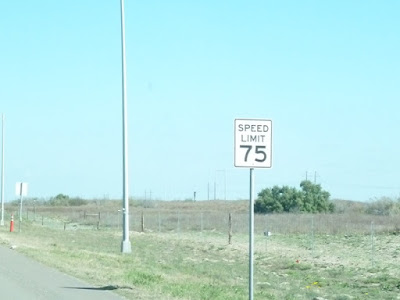 For our Canadian friends: that's mph!

Our planned route took us through St. Antonio where we wanted to fill up with gasoline.  We use  GasBuddy to check who sells the cheapest fuel.  Even back here in Canada we use GasBuddy all the time.  If you use a device with GPS it tells you right away where all the nearest gas stations are and the current rate or, you can just enter the location, i.e. town or city where you think you will need fuel next.  We all know fuel is much cheaper in the USA than Canada, but we couldn’t believe the low price advertised at the HEB gas station in St. Antonio.  Sure enough, everybody in Texas must have seen the advertisement judging by the traffic leading to the plaza.  The lineup to the pumps wound around the whole parking lot of the HEB supermarket with more and more cars trying to squeeze in. To put it mildly, it was mayhem.  Just imagine our truck with travel trailer in tow blocking the bay. No way would we attempt to do that. To our luck we spotted an empty parking lot next to a bank under renovation on the other side of the street and that is where we parked, unhooked the trailer, put the jacks down and then drove over to get in line to participate in the frenzy. 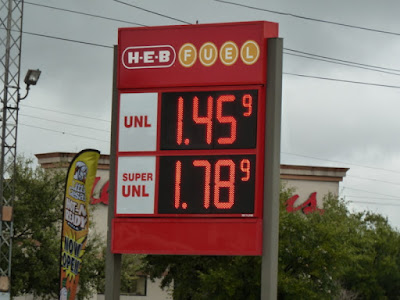 An hour later, tank full including all jerry cans filled to the brim and a quick trip into the supermarket for a few items we were on our way again.  By this time it was late afternoon and we decided to keep on driving until we would be too tired to continue.  A rest area just before Corpus Christi looked good to us. It turned out to be an ok spot for the night.

The following day, a Friday, we pulled into the Palm Garden RV Park in Harlingen. It’s an older park right next to a highway overpass.  The occupants here were for the most part old-timers and called this place a home away from home.  Our intentions were not to stay for very long, rather to use this central spot for scouting out a RV park where we would settle down for some weeks. 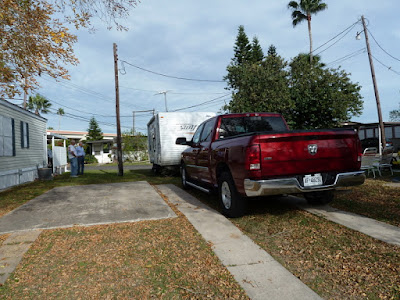 Our spot in Harlingen

Saturday and Sunday we drove around armed with notes and coordinates of RV parks, spent a little time at the mall located around the corner and more time at the BassPro Shop also situated nearby.  I have to say, I fell in love with the area of Port Isabel, about a 45 minutes drive from Harlingen. The town is located on the western side of the south end of Laguna Madre, an estuary of the Gulf of Mexico.  At its very end of town we found the Port Isabel RV Park Center and a block away is the Queen Isabella Causeway, which takes you over to South Padre Island on the Gulf shore.  South Padre Island is a resort town and is apparently very popular at Spring break, so we were told.  But we liked what we saw and booked a spot by the water for a month starting the following Monday. 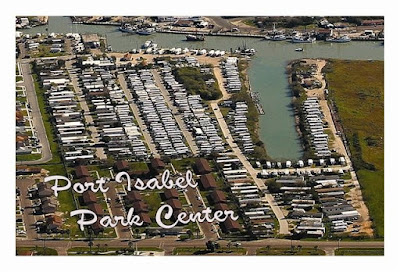 Did I mention the Port Isabel RV Park is large?  It is a very sizeable park and just walking around the perimeter will provide you with a good exercise.  Before we left on the trip south we really didn’t have an idea what kind of parking spots we might encounter and because of that we had brought along our Parkit Power Dolly stored on the truck bed along with a lot of other things we had not found a use for yet like our  big 32 gallon poop tank, (portable waste tank on wheels) which we had no reason to unpack either, thank goodness!!  It had puzzled us why the spot right at the water was still free in such a tight packed RV park where space is at a premium.  Well, the reason the spot was free was no one had been able to get in because a flowerbed blocked two thirds of the driveway and you had to back in at an angle which would have both neighbors with their big rigs make them hold their breaths. I knew the dolly would come in handy someday which was now.  Singlehandedly and with ease Benno maneuvered our travel trailer, hooked up to the dolly (it pulls 9000 lbs.) into the parking spot overlooking the canal. 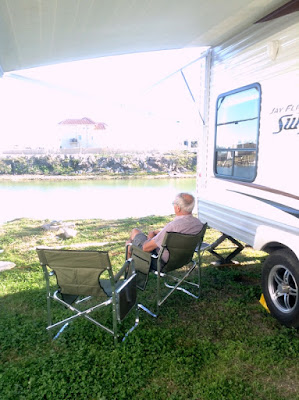 View onto the canal 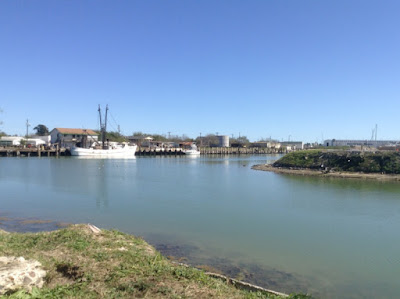 All settled into our spot we got talking to our neighbors to the right when we discovered that they owned a full-grown Great Dane dog. Whoa, he was friendly but I didn’t know dogs could grow as big as a pony and I was sure glad they had a fence erected around their pad.  By the way it was mentioned that their previous Great Dane had passed away on a former trip to the RV Park and not knowing what to do with it, they took it along and buried it at the RV Park, but not before purchasing another Great Dane. Guess where they buried the dog?  Yep, the flowerbed!
Posted by Marlene Klopfer at 18:13