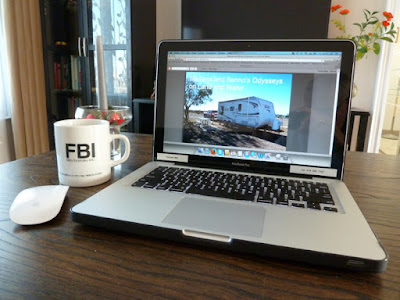 This morning, while reading blog posts of fellow RVers, I learnt that several people had difficulties posting pictures or entire posts within the last day.  I know that is stressful and very upsetting, to say the least.  Yes, I went through that myself several years ago while cruising on our boat, sitting in remote locations with spotty internet connection and trying desperately to get a post out.  In addition to this irritation, our computers got Trojans and were infected with a virus several times through the years of our travel.  At the time I used exclusively Window operated computers with Microsoft programs, as I had done while I was still working fulltime. For a while it seemed all the antivirus programs could not keep up with all the hackers out there and I found myself on the IRIDIUM phone (800 minutes $500) calling for help to our son, who’s occupation is in IT to get my troubles resolved.  He told me many times to purchase an Apple computer because none of my computer problems would have occurred as it runs on a different operating system of much better design.
A webpage or blog is fun to have for sharing some thoughts and pictures. It should be an enjoyable hobby to do and of course not too difficult to implement. I read that many of the bloggers use a program called “Live Writer” which was the culprit of the trouble many of the bloggers experienced yesterday and it is a program from Microsoft, which became (open sourced) yesterday, so there were probably some glitches.
For the longest time, years in fact, I stayed with Windows operated computers because I was familiar with them, but when the then only three year old HP Laptop computer, which had numerous viruses started to give us grief, we relented and bought a MacBook Pro.  That was in July 2013. I thought we would have to start learning new programs, but we were wrong.  If you have already an iPad or tablet or a smart phone, you know there is not much to learn.  You just use it.  That’s it!  Ever since using our Apple computer we have never had any issues or a virus at all.  Yes, we also run “Word” on it, which is Software from Microsoft.  And searching the Internet, I found an article from Vintage Revivals on how to use the “Live Writer” successfully on a Mac.  In my humble opinion when it is time to purchase a new laptop or computer, look into what Apple has to offer.

Posted by Marlene Klopfer at 11:09