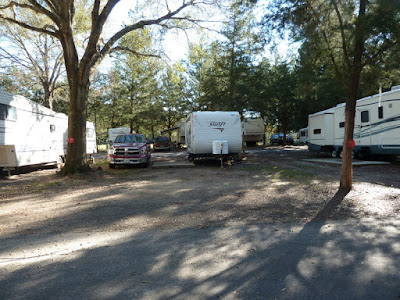 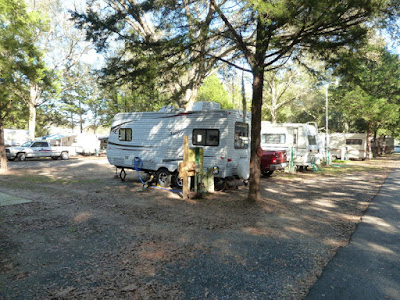 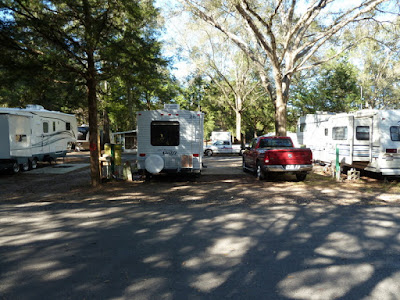 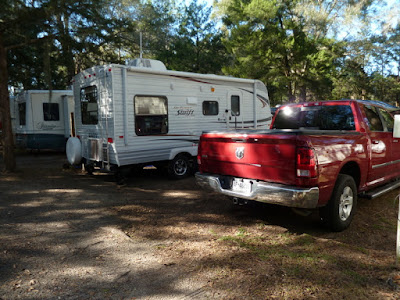 A whole month in Robertsdale, Alabama went by and Benno and I get the urge for wanderlust again.  Our stay in the Hilltop RV Park had been a pleasant experience made especially enjoyable by the nice folks we met there.  Across from our camper Don and Nancy from Great Valley, NY with their little adopted dog were great people we had lively conversations with.  Also Jim and Nanne from Sioux Fall, SD who parked their motorhome next to our trailer were super nice neighbors.  I might have mentioned sometime ago that I usually don’t care much for planned activities, but Nancy had asked me if I wanted to accompany her to one of the craft activity afternoons in the clubhouse and so I went.  There a bunch of ladies got together to create cones from a Styrofoam egg, decorated with small pieces of ribbon which were fastened with pins.  I had come empty handed but Nancy was gracious and handed me an egg, a roll of green ribbon, the use of her scissors and I think I used up half of a box of pins the brought.  Thank you Nancy! 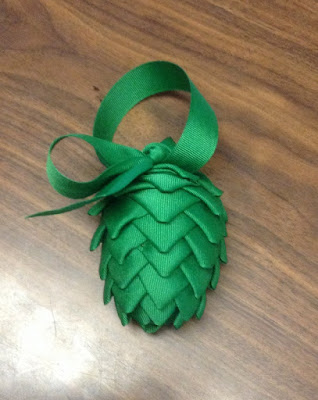 This is my finished project.  At the end of two hours we arranged all the completed cones in a pile for a picture.  Maybe my granddaughters might like to make some cones with me once they are a little older, now that I know how to make these. 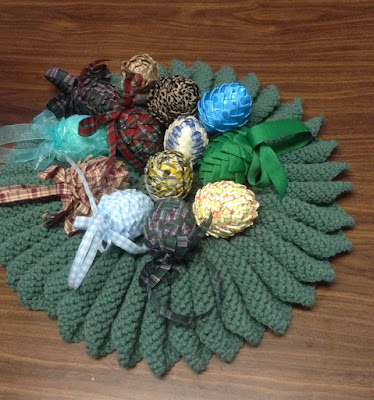 So to explain the above pictures of our location, we are now parked at Cliftwood Mobile Home and RV Park in Ocala, Florida and yes, it is quite a bit warmer here than Alabama, because we are much farther south.  We just arrived yesterday so aside from a shopping trip into town this morning which revealed more reasonable grocery prices than in Pensacola, two very close by Winn Dixie Supermarkets, Aldi stores, huge Walmart stores and so on, I have nothing negative to report. Had to tie down Benno to the pickup, when he spotted a Northern Tool store, a TSC store and a Harbor Freight store in town. For sure there will be another time for that, I could not handle this thrill today. My overall impression is that I think this is a good place to stay for a while.

And now here is a little account of our last week in Robertsdale.  While Benno and I were out for a stroll at the shopping plaza in Spanish Fort, close to Mobile, AL, we popped into the Pet Smart store.  For one reason, we like to look at cute pets, for another reason because for quite some time we had been toying with the idea of getting a dog again and all the necessary paraphernalia needed was of interest to us.  We are Dachshund lovers.  You might have guessed as much since we included in our sidebar at the header ‘Blogs we follow’ “5C’s Que Pasa”, and “Where are the Dixons Today”, who both own a couple of adorable Dachshunds that look just like the ones we had. Over the timespan of 40 years we had four Dachshunds (wiener dogs many people call them).  As it happened, while we were in the Pet Smart store a Pet Adoption program was underway.  “Shana”, the owner of the Animal Rescue organization had brought in 5 crates with Pit-Bull dogs, which were ready for adoption. Pitt-Bull is not our kind of dog, but Benno talked to the lady in charge and told her that we considered getting another Dachshund. “Oh,” She said, “A woman asked me yesterday if I had space for a Dachshund but my crates were all taken, so I couldn’t take it.  If you want, I will text her to send me a picture of the dog and I’ll forward it to you.”  She went on to explain that the dog was 18 months old and not properly house trained and a retired couple with lots of time would be a good fit for it.  Were we interested?  Of course we were.
Later in the afternoon I called Shana if she had received the picture, but she hadn’t. No picture the next day either.  Then the following evening we got an email with a picture of a cute black and brown Dachshund held by a young, sad looking girl.  My immediate reaction was, you wouldn’t take away the girls pet, now would you?  Of course the Dachshund looked adorable and we liked her so I emailed Shana right back that we were interested and would like to meet the dog.
However, we got no reply and two more phone calls to Shana with the offer to give our contact numbers to the owner of the Dachshund to contact us directly brought no reply.  Well, we guess they must have had a change of heart.  Maybe this outcome was for the better, as we sure don’t want any broken hearts. 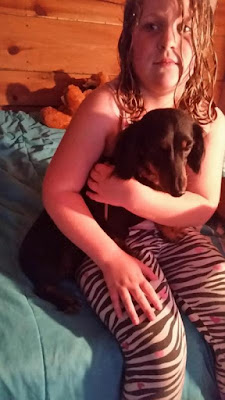 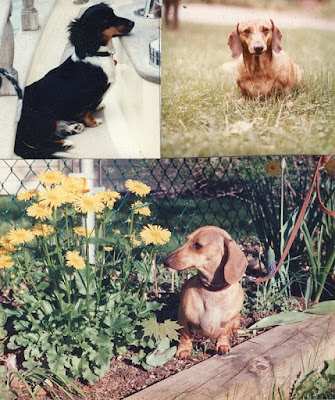 Here is the picture of the girl with the dog

And here is a picture of three of our previous four dogs.

Posted by Marlene Klopfer at 17:29