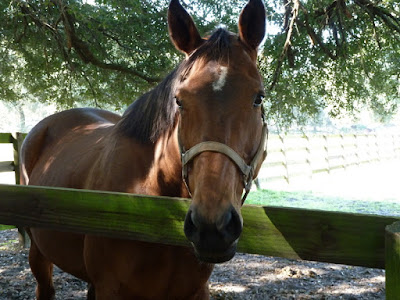 For three consecutive days last week the weather was just blissful here in Ocala, Florida.  The temps were around 30C/86F, which I thought was absolutely perfect.  We walked around the neighborhood wearing shorts and t-shirts and I sat outside the camper under the canopy of the oak trees here in our campground reading my book. Then the days got cooler and toward the end of the week it turned to outright bitter cold.  Oh well. 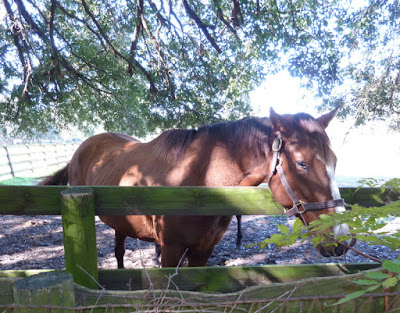 On one of my walks I visited the horses right across our RV Park.  Everywhere you look there are horses here. 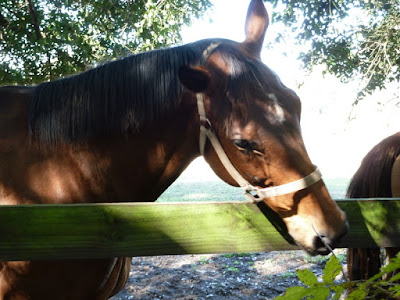 So instead of sitting inside the camper on cold days we thought of things to do or see.  A fellow RVer had told us of reasonably priced RV options in Zephyrhills, Florida and we were curious to check them out so we hopped into the truck for a day of exploration.  Good thing we did.  Imagine you are pulling your rig and it is late in the day when you arrive at a new place that is just so horrible that you wouldn’t even want to spend a night.  That about rounds it up.  Big disappointment and I took NO pictures.

There was an upcoming RV show here in the outskirts of Ocala starting last Thursday and lasting to today, Sunday.  Looking at new RVs and equipment for the campers is always a fun thing to do.  The weather forecast called for rain on Thursday. Although it was overcast we didn’t see any rain clouds and we debated weather to go or not.  I had spent longer than usual at the computer that morning and wanted to take my shower first before heading out.  Benno looked at the radar image and was sure it would not rain before 4 p.m., which would give us enough time to enjoy the show.  Midmorning, when we were finally out the door and on the road, we discovered that we forgot to bring the address of the show with us.  Benno had a general idea where it was but we didn’t see any signs anywhere.  Thanks for free wifi at MacDonald’s I quickly found the address on the Internet and it was just a couple of roads beyond the restaurant on a huge horse park. 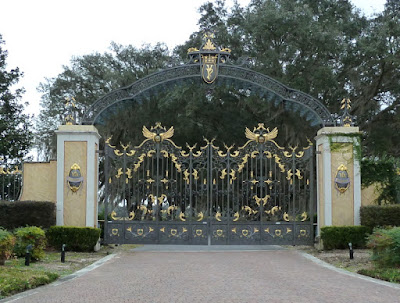 On the road to the RV show I spotted that gate.  Wow, I made Benno stop the truck so I could take a picture of the entrance and I wondered who lived there.  Well, upon returning home I found on the Internet that it is the entrance to the Via Paradisus gated community of the former Franks Farm. You could buy property here, you know.

There were lots of campers, coaches and RVs of every kind and size arranged like in a maze on the vast grassy field.  The lone equipment tent held no new findings but got us a coupon for $10 off at the Camping World store.  A 24-foot travel trailer with a slide out caught our attention of which I took a picture.  My intention had been to take a bunch of pictures of the show for my blog but guess what?  As soon as I took the first photo, the first raindrops fell and within a couple of minutes a steady rain pelted the roofs of the RVs. We ran for cover of which there was none and by the time we reached our truck our trousers and jackets were drenched.  I looked at my watch, which read 1:20 p.m. hey, why couldn’t the rain stick to his timetable of 4 p.m.  Thankfully the entrance fee for that day had been a BOGO (buy one, get one for free) Next we headed for the Camping World store in the pouring rain itching to redeem the $10 coupon we got at the show, since we already had a couple of items on the list we needed. So all was not lost and we got a good deal on our purchases. 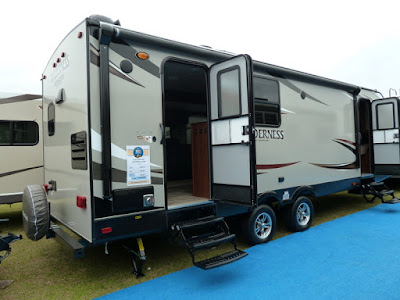 On Friday the sun came out again, all the rain forgotten as it happens here so often in Florida.  There is a Flea Market right next to I-75, which runs from 9 a.m. to 4 p.m. Friday to Sunday.  Why not head there to look at stuff we thought.  When we got there I looked for parked cars but there were none and I was sure we had the date wrong.  Once inside the enormous complex we found three stalls open and we were the only visitors! Disappointed and chilled to the bone because the halls were drafty and cold we headed for home. 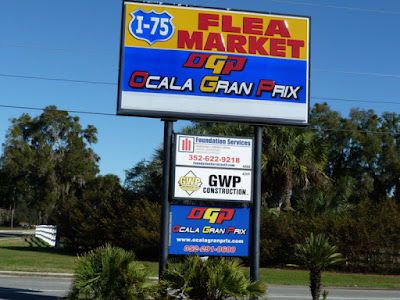 Saturday’s weather again promised cool temps with some rain for the afternoon in some parts of Florida.  However, Benno had another plan for exploration and that rain might not even materialize or so we thought.  Ha!

Our plan was to drive all the way south to Titusville, Florida.  During our boating years we’d passed through that area several times but you cannot compare boat anchorages or marinas to RV parks.  An advertisement for a RV park in Titusville that charges according to your length of rig caught our attention and would cost us only $300 US dollars/month so we wanted to have a look.  The drive from Ocala takes you across the state through the Ocala National Forest until you hit the I-95 to go south.  It is a nice drive, but a long one.  The further south we drove, the warmer the temperature climbed. While we started with the heater on we ended with the air conditioning running full blast at our destination.  A former cruising couple runs this RV place in Titusville. They used to be boaters, sold their sailboat and purchased the place last August. The place needs lots and lots of work and the advertised fee would only be in effect if we stayed the whole year.  Actually, the price is now double with no facilities and no security in a questionable area.  I guess you don’t necessarily always get what you pay for. 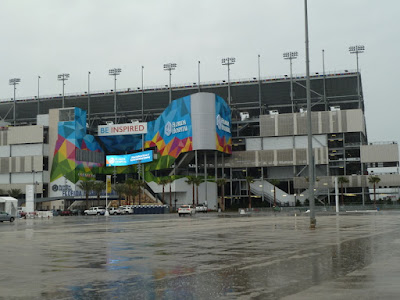 One of the entrances to the Speedway

For lunch, on our way back we stopped at a Cracker Barrel restaurant right next to the Speedway in Daytona Beach.  We’ve never been to this chain of restaurants and this was our first, upon entering we were hit with a noise level that was deafening.  At the table we had to raise our voices and lean forward to hear each other.  The food… nothing to write home about and if there is something on the menu that draws people in, we won’t be back to find out what it is!  Upon leaving the restaurant the sky had opened up and it was raining, no, it gushed by the bucket full, just another damper for the day. On the way back thru the Ocala National Forest my hubby spotted a row of signs indicating a gun show. Shit, pardon me, now I lost my man for at least a couple of hours, him looking and touching the hardware and me sitting in the truck reading a book on my iPad. It was dark by the time we got home.  What a day!! 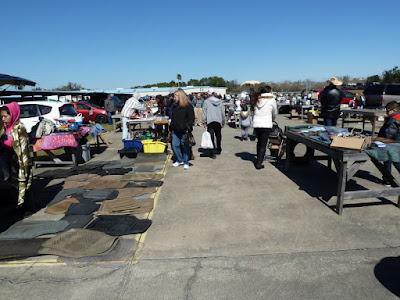 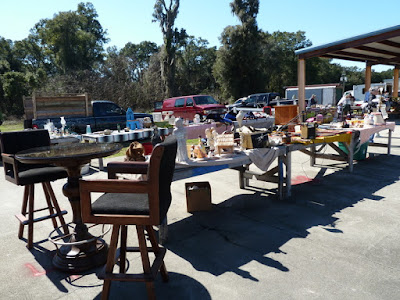 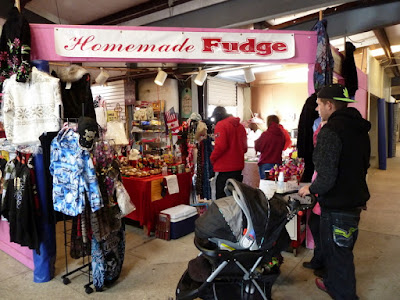 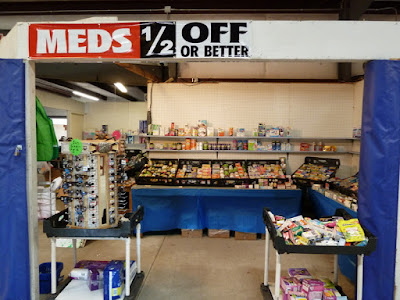 So this brings me to today, a cool, but sunny day.  We gave it another shot at the Flea Market and yes; there were crowds of people in the halls and outside milling about the displays.  There are plenty of open spaces still to be filled up and perhaps in the summertime there is more going on, but at least I rewarded the freezing and shivering veggie table guy with my purchase of red and green peppers and a box full of zucchini. 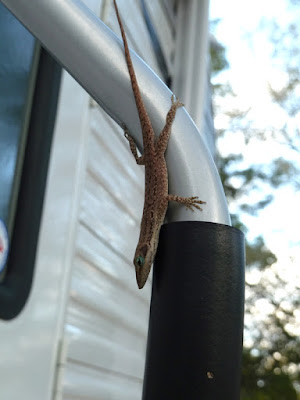 This little fellow I almost grabbed when we arrived at the camper mistaking it for a little branch from the oak tree.
Posted by Marlene Klopfer at 16:39