Boosting your wifi reception at the RV Park 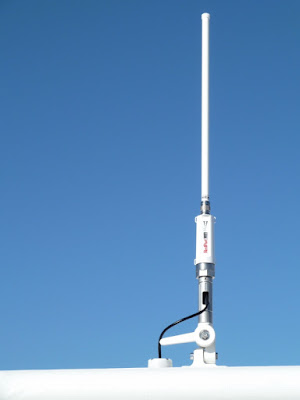 Haven’t we all experienced getting a weak wifi signal to access the Internet in a RV park, truck stop or marina or public hotspot? The signal drop is so slow, far worse than the old telephone line system or for many reasons as indicated in the previous write-up from January 15th in this blog.
Over the years I developed knowledge in pulling in a weak wifi signal while living on and cruising with the boat, sailing to distant places and trying hooking up the laptop to a wifi hot spot, to get weather reports, email or browsing the Internet. After we moved onboard our boat in the summer of 2005, we started to schlepp the laptop to Internet cafes to access the Internet and do Skype in tropical places like Nassau or St. Thomas, St. Martin, Martinique or Mustique.  You like these names, don’t you? Haha! In Tyrrell Bay under anchor off Carriacou Island (Grenada) we got free wifi access from shore provided by a generous member of the SSCA (Seven Seas Cruising Association), who beamed out an boosted up wifi signal over the bay. Thank you Rick and Sue of the sailing yacht “Panacea”.
Their signal was boosted up enough that our laptop picked up the signal with ease, at the comfort of our boat.
Only less than a handful of marinas down in the Caribbean Islands up to 2010 had gotten around to provide wifi. They were far behind in technology and not as advanced as they were in the United States where wifi had made huge steps.
In this anchorage in Tyrrell Bay, Cariacou my mind set itself to get some kind of a wifi signal booster, which could cover a mile or more to the antenna of a wifi access point, which beams out the non secured wifi signal from a restaurant, villa on the beach or a sports bar with wifi.
Just a few months later I got lucky in the Porlamar anchorage of the Margarita Island (Venezuela), where Jimmy Buffett must have slurped his first Margarita. One of the more than 160 boats under anchor there, the sloop “Pinocchio” with a computer geek on board, had a good business going in selling his doctored together wifi booster to the many boats around him for $120. This permitted every boating Internet junky (haha) to boost the weak incoming wifi signal from the busy Rum Bar on the beach a good mile away or a little stronger signal from a high-rise apartment building, where somebody else was selling a secured access for $30/month. But the Rum Bar wifi was free.
Pinocchio’s booster looked like the picture below plus an additional little circuit board (no picture of that), which plugged into a slot on the laptop. From the pc-board a cable ran to the unit with the rubber duck antenna. The 120v power adapter cable plugged into the antenna unit too. This toy boosted the wifi signal with 200 mW. 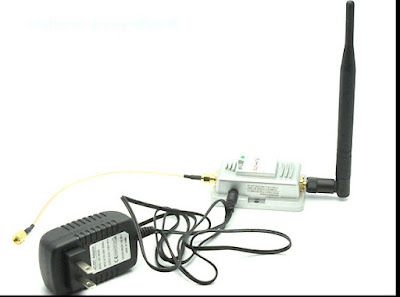 This “Pinocchio” wifi booster worked well, made things happen from July 2006 to Feb 2009 all the way from Venezuela thru the Panama Canal, Colombia, Ecuador, Chile and to the city of Ushuaia, Argentina on the most southern tip of South America.
In Patagonia, Chile, there are no villages for a thousand or so miles to get wifi; we used our Iridium Phone with Ocean Software to get onto the Internet for important weather reports, at an extreme cost.
In Ushuaia a French charter boat captain pointed out another wifi booster, which worked miracles even better, a D-Link DWA-110 and was avaible in town for a pile of Pesos. I got one, see picture below! 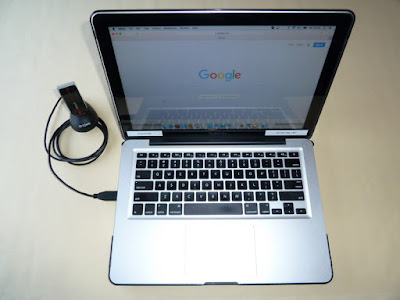 This  D-Link DWA-110 wifi unit plugged into a USB outlet on the laptop and worked very well. It was powered by the USB outlet and was configured by a CD-ROM, included in the package. This unit improved the wifi reception all the way from Argentina’s city of Ushuaia up the coast of Atlantic South America past Uruguay, Brazil and French Guiana up to the US Virgin Islands and St.Martin. In the Simpson Bay Lagoon of St.Martin Dutch side, now called Sint Maarten, every boat owner was buying a wifi booster called “The Wirie” This was the hottest toy on the market, apparently the best thing since sliced bread. It would be mounted on top of the boat, had 500 mW boosting power and would work with a USB cable run thru the roof of the boat to the laptop. A sailing catamaran owner anchored in the lagoon would sell, install and configure the US made unit for $250. The chap was a part owner of  “The Wirie” Company as well. We got one and this unit worked very good and improved our desire for Internet bytes. The D-Link unit we mothballed. Picture below of the mounted “The Wirie” on our boat “Diesel Duck”. 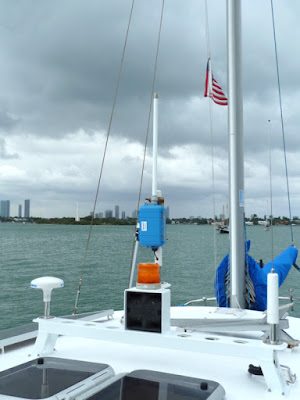 “The Wirie” stayed with the boat and was sold with the boat. It is a good unit, nothing negative to report, but the router is in the blue box on the outside and when a RV is made out of aluminum, like an Airstream travel trailer or trailer with metal roof this could present a problem. The aluminum could prevent the signal to come into a trailer to the laptop, iPad or smart phone or shield the RV like a Faraday Cage.

While searching for a wifi booster for our RV travel trailer, I checked out many leads on the Internet. My criteria was: marine quality, weatherproofed, easy mounting, easy configuration, router on the inside, antenna outside, powered by 12 volt and 120 volt and affordable, not breaking the bank.
Here is the winner, the “Red Port Halo WiFi Extender” from Global Marine Networks. It was easy to install and works like a charm, has plenty of power, pulls in a weak signal, covers a range up to 7 miles, works wonderful on Skype and gives us freedom to work simultaneously on multiple devices like a laptop and iPad and was not breaking the bank with a price tag of $350. Below picture is the “Red Port Halo WiFi Extender” 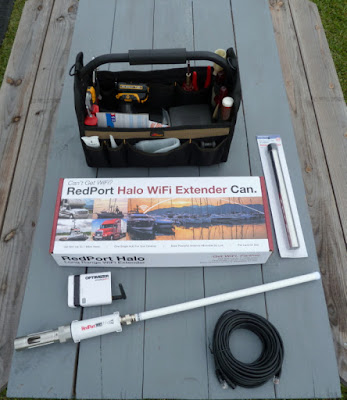 Benno's tool bag and the s/s tube are not included ;`)

I liked what I saw, this unit was the top of the bunch for Marine and RV application, weatherproofed with o-rings and silicon rubber seal, carrying tube machined out of stainless steel with incorporated 1”-14 thread to accept the Standard Marine Antenna Mount, included was a neat “Optimizer” router which could handle Cell Networks, Satellite Phone for Satellite Internet beside the “Red Port Halo WiFi Extender”. Included too was a 32 ft coiled up Antenna/Power Cable, a bag with assorted Hardware and an easy to follow Qickstart Guide and Setup Manual.
A truly professionally, nicely put together package by someone, who must have done a lot of research.
The installation was extremely easy, all I had to do was to drill a ½” hole thru the roof of the trailer. I used a ½” step drill bit to do this, easily purchased by Harbor Freight in the USA or Canadian Tire in Canada. Picture below! 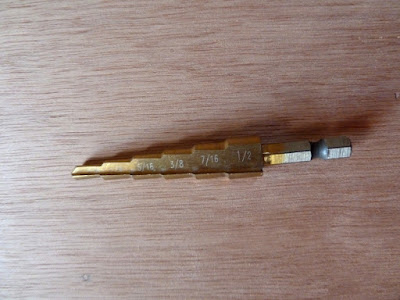 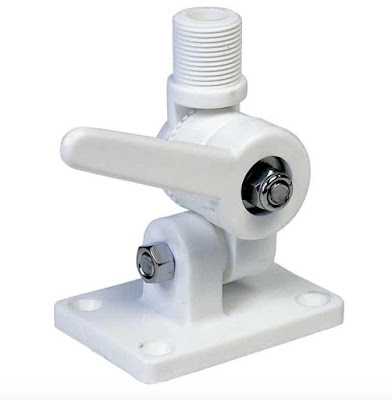 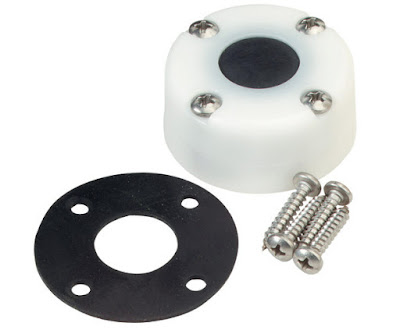 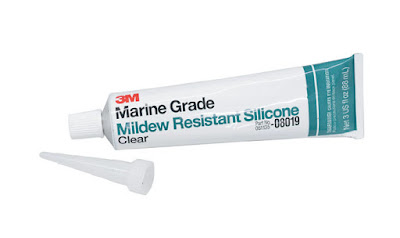 I mounted the cable clam right over the drilled ½” hole in the trailer’s roof and used a small amount of quality 3M Marine Grade Silicon Sealant between roof and cable clam to weatherproof this installation. 2” in front of the cable clam I mounted the Nylon Dual Axis Ratchet Antenna Mount with 4 stainless steel screws and weatherproofed it to the roof with the 3M silicon too. A leaking roof as you know could be a pain in the neck.
A fishing wire made from a wire coat hanger permitted me to pull the supplied antenna cable secured with electrical tape thru the ½” hole of the trailer’s roof from the inside. The cable got plugged into the bottom of the on the Dual Axis Ratchet Mount attached “Red Port Halo WiFi Extender”. The cable clam with the rubber seal weatherproofed the antenna cable. See picture below! 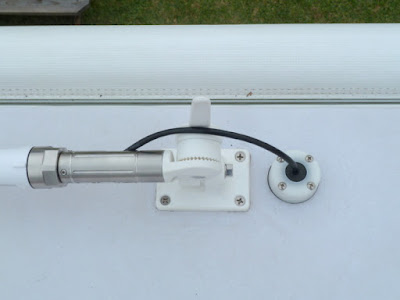 Inside the travel trailer in an overhead cabinet, right above the manufacturer supplied entertainment center, an open shelf offered itself to house the supplied “Optimizer” Router. The cable hole in the roof was right above it, nice planning by my girl “Marlene”. It worked out perfectly. The “Optimizer” Router got mounted to the rear wall of the shelf and the antenna cable then plugged into it.

The supplied 120 volt power adaptor found a place in a 120 volt double outlet nearby which as well feed the TV. The cable end from the power adaptor cable got plugged into the “Optimizer” Router and powers “”Optimizer and “Red Port Halo WiFi Extender”. Look at picture below! 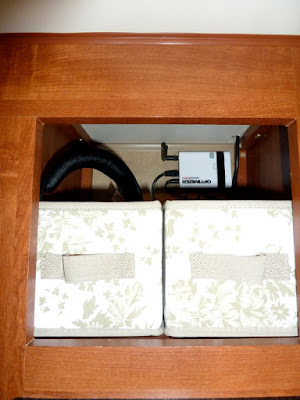 Marlene does not have to wave the iPad in front of the settees window anymore in trying to catch the parks wifi signal, neighboring folks use to say “Look at she, she is waving at us again, are an she is friendly”, Haha! Now we have a strong wifi signal everywhere in the RV and even outside sitting in the chair and bathing in the sun. The “Red Port Halo WiFi Extender”, the Nylon Ratchet Antenna Mount, the Cable Clam and the 3M Silicon Sealant amounted to $ 397 plus a few dollars for the ½” step drill bit maybe. The money was well spend. We are very happy campers. Look at the picture below! 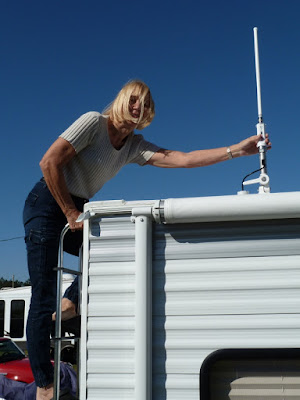 Posted by Marlene Klopfer at 15:00

Email ThisBlogThis!Share to TwitterShare to FacebookShare to Pinterest
Labels: Boosting your wifi reception at the RV Park