During some of the hottest days in July with temps of 40C (100F plus) we used the camper as a guest room. To make our guests happy we had the Norcold fridge powered up and loaded the fridge with some cold beverages and placed a pot of delicious ice cream in the freezer compartment. Those were truly hot days and we noticed that the ice cream did not stay as frozen and hard as taken out of the household freezer. The ice cream had become soft. The Norcold labored for sure but could not keep up with the extreme hot summer temperatures. Benno came to the conclusion that it would be possible to improve the fridge’s performance by increasing the airflow from the back of the fridge’s lower vent to the upper roof vent. He figured by fitting a couple of electronic 12VDC muffin fans below the upper vent to move the air faster that would be the solution.  We so happened to remember that among our leftover boating stuff there were two Swiss made EBM Papst 12 volt, 120mm electronic cooling fans in a box in the attic. These were ball bearing fans and they are good for 60,000 hrs. Perfect!

Our readers must have by now realized that Benno loves to make little improvements on the camper.  Something to tinker around and with his background of fixing things electric/electronic and having the tools to do it, there is no holding him back.

To do the job right we went to get a cartridge of DICOR 502LSW self leveling sealant from the Jayco dealer in Tecumseh by Windsor, because Benno thought that he would have to remove the upper vent from the camper’s rooftop.
We got onto the Jayco internet forum, which is excellent, full of good tips and even asked experienced RV friends if they knew of a good way to remove the old sealant without making a big mess and damaging the roof. The plain indication from everyone was, there is no magic way of removing the by Jayco generous applied sealant, a lot of patience and a 2” putty knife were the recommendation.
Benno went up the ladder looking at the exhaust vent and down the ladder again to look at the fridge, he was not  thrilled and too happy, I let him have his peace.
The next time I looked, he was standing in the opening where I last had seen our fridge and mounting the muffin fans. My Norcold fridge was parked in front of the stove. He had pulled out the whole fridge/freezer from its location into the camper, all by himself, to get access to the roof from the inside. I guess the thought of having to scrape the gooey mess off the roof made him decide to rethink the job and rather find an elegant solution to work with.  According to him, it took less then 30 minutes to pull the fridge after disconnecting the gas supply and the wiring, “son of a gun” and this after dinner. 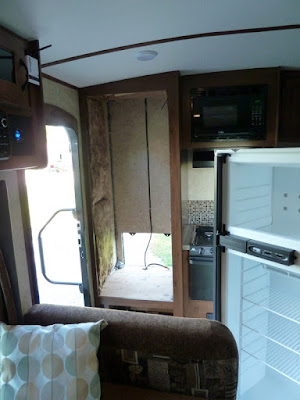 The next day I helped Benno to move the Norcold back into the proper location and I can attest that the monster is heavier than I thought. Our Norcold fridge is the model N811 and after the installation of the two extra muffin fans under the fridge’s roof vent, the temperature inside the fridge is noticeable cooler.  Benno thinks we gained an additional 10F/6C while the fans are powered up. Presently our outside temps are 28C / 82F and we tested the fridge running on propane as well as hooked to the electric outlet. At the medium setting on 3, the temp in the fridge tested 3C / 38F and in the freezer -18C / 0F.  Not that I’m complaining, but I probably need now an ice pick to scoop out the ice cream. You could go to a higher setting like 4 or 5 and compensate for warmer outside temps. Interestingly the muffin fans increase the air movement and that takes more heat away from the coil behind the fridge and this vents more air thru the condenser according to the experts.

So for all the techies out there who are interested in the how to do it, I need Benno to describe the steps he took to complete the job.

This update to the Norcold fridge model N811 worked out fine and can be done. I (Benno) was lucky to have still 2 muffin fans of 1.st class quality from our boating day’s stashed away. On the following picture you can see I made myself a couple mounting brackets from 1” angle aluminum and two joiner brackets to mount these fans side-by-side. 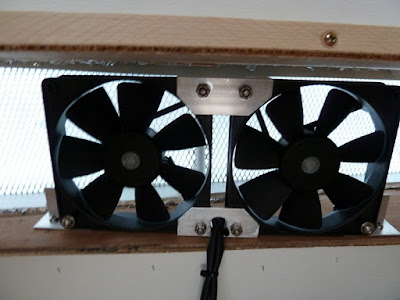 This arrangement was easy to fasten to the wooden frame underneath the roof vent. See picture below. 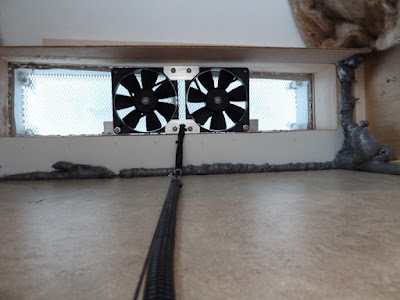 The EBM Papst Muffin Fans pull each 160 mA and move 67 cfm air each. Picture below. 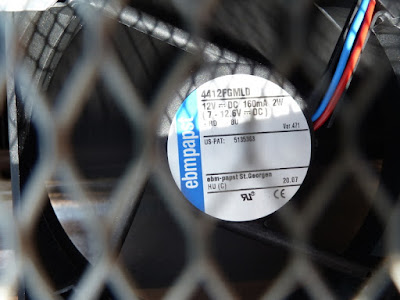 Here is a picture of the mounted fans seen through the roof vent having the cowl removed. 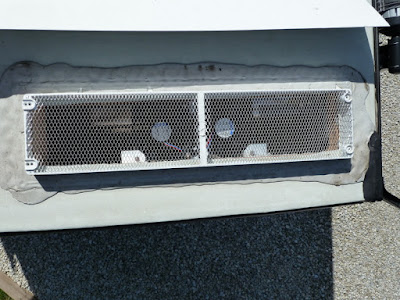 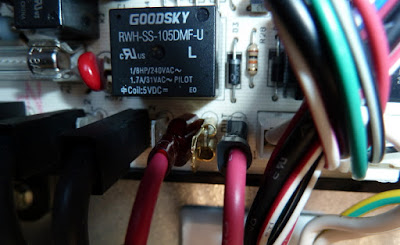 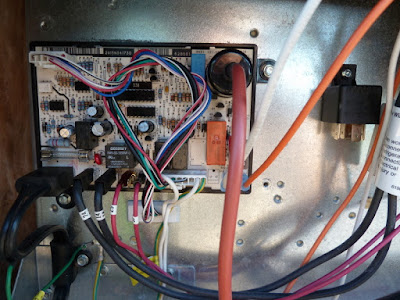 This switched 12+ VDC presented itself to activate a nice little relay, which will, when activated, provide the two muffin fans with 12 VCD power.
The relay I used is a “Hella” automotive relay, which I still had in my stash of spare electrical boat stuff. It had an 85 Ohm coil, which amounts to a draw of circa 0.150 Amp. I had looked at the printed circuit side and the component side of the PC-board and noticed that the “limit in” male spate connector should easily handle 0.150 Amp to power this relay via a wire to the relay male spate #86 (Coil).
Between PC-board male spate “limit in” and the relay’s male spate  #86, I wired an on-off switch. This switch would give me the option of switching the fans off during the cooler season, when the extreme hot weather temps are gone.
To protect the PC-board I wired an inline fuse of 0.250 Amp between switch and relay male spade #86 (coil).
Actually, the switch I used had a red LED which tells me if the fans are on or off.
On the other side of the relay coil is the male spate connector #85 (Coil) used for the 12- VDC (GND) taken from the white wire coming from the trailer’s power center.
The relay’s male spate connector #30 (C) needs an independent not switched 12+ VDC. The from the power center coming orange colored wire, which supplies the fridge’s 12+ VDC at the male spate connector 12+ VDC on the PC-board is a good choice. I split off a lead wire from the orange wire with a wire connector.
This wire lead goes to the male spate connector #30 (C) on the relay. The male spade connector #87 (NO) on the relay will, when the relay is powered up, supply the muffin fans with 12+ VDC power via the muffin fans red wire, which is connected to the male spate #87. 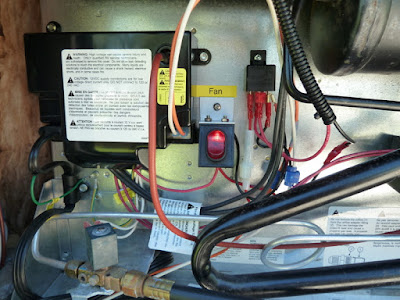 The muffin fans black wire is the fans 12-VDC (GND) supply and it got connected with a wire connector to the white wire coming from the trailer’s power centre and is by the way the fridge’s 12- VDC (GND) supply. 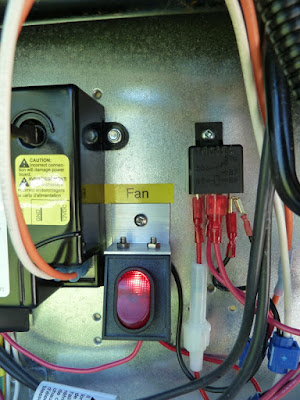 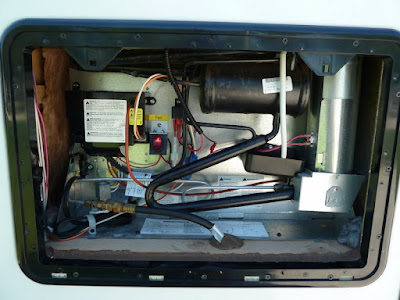 Tools and parts you need!
Use a good ratchet crimping tool, you need red and black AWG 18 or 20 gauge tin copper stranded wire and fully insulated female spade connector, an automotive 12 VDC relay with mounting bracket (Bosch, Hella etc.), a couple of spate double male/female adaptors and a toggle switch (NO) with male spate connector. The two muffin fans should be 12 VDC and 120 x 120 mm in size. Get ball bearing fans and not the sleeve bearing type. Click EBM Papst at the top.
Posted by Marlene Klopfer at 13:44