Two and a half days of travel and we have arrived

Sunday morning Benno and I were busy doing our last minute chores before rolling out of our driveway. The truck had been washed and polished the day before but we had a light dusting of snow overnight so that clean appearance lasted just until the next intersection, where road salt and slush played their game. Oh well.  At least there was no more precipitation. There was not much traffic going to the Ambassador Bridge at the border but I found there were more cars waiting to pass through than it is usually the case for a Sunday morning. Monday was a holiday for both USA and Canada so that was probably the reason. We had a 45 minutes waiting time before it was our turn. 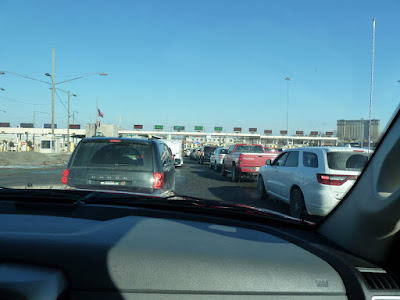 Waiting in line at the border for our turn

After a brief inspection of the inside of our trailer (I don’t know what the border inspector looked at) we were given the go ahead and to have a nice day. It turned out to be a pretty good day and the driving was good. Not so much the roads though. The winter weather caused even more potholes to the already beaten up roads and highways in Michigan and Ohio. 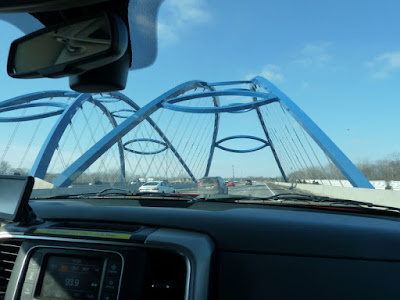 For travel we make sure to secure everything inside the trailer in case we bounce around and this time we really shook the trailer as we hopped along I-75. When we stopped in Sidney, Ohio to fill up with gasoline, I went into the trailer and found one drawer open and several bottles from the bathroom cabinet had fallen out and were lying in the sink. Also the two levers that adjust the horizontal blinds in my kitchen had sprung off the hooks.  They always come off and I should just give up and unhook them before we drive anywhere.  Benno had made some notes where we would fill up with gasoline on our way south. The gas prices vary quite a bit and by using gasbuddy we find the lowest prices in any state.  At the Murphy Gas Station in Sidney, OH we filled the tank of our truck and all of our jerry cans for US 2.039/gal. That lasted us until we filled up again at “Circle K” in Pelham, AL where the price was $2.079/gal.  I noticed price variations from $2.03 to $2.45. The further south we went the more the gas cost. 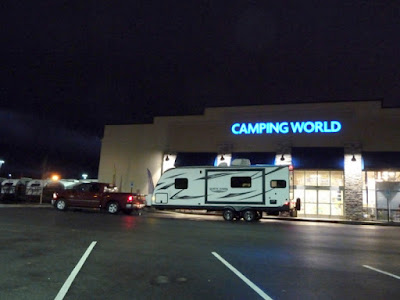 Sunday night we spent parked at the Camping World parking lot in Georgetown, Kentucky.  It is right next to the Interstate but traffic noise calms right down at night. Most Camping World stores have complimentary overnight parking for their customers and in the past we have had good experiences doing so. We were tired and called it an early night after eating my precooked dinner. It rained during the night but the rain stopped before we got up. Next morning we were hitting the road at 7 a.m. but I had made us breakfast first and did the dishes while Benno walked the dogs and stored the Honda generator.  We always eat an early breakfast and I made a pot of filtered coffee in the coffeemaker, toasted a sesame bagel for me and warmed up a third of a French baguette for Benno in the toaster oven. Those we eat with either cottage or cream cheese, smoked ham, imported Cherry marmalade and Guava jam. In addition we each have a small bowl of fresh fruit that is in season.

Monday’s travel day turned out just as long as the day before and the weather was good too with sun and no rain but lots of traffic. Along the way we made a few pit stops for a bit of shopping and to stretch our legs. In Chattanooga, Tennessee, we left the I-75 and rolled along the I-59 to Birmingham, Alabama to meet the I-65. For the night we ended up at Camping World in Calera, AL. close to Birmingham. The Camping World stores are usually located close to the Interstates so you can spot their super large flag flying next to the store. We needed a newer edition of the Good Sam RV Road Atlas and an entry doormat. After doing our purchases we asked to stay the night and were told that we could pick one of the full hook-up spots (power, water and sewer) if we wanted to, as they are complimentary to transient “Good Sam” members. Yep, what a service, right! There were quite a few rigs parked already and we thought it wasn’t worth the effort to back the trailer into the middle and to ask for the neighbors to move their cars so we would fit in.  There were enough level spaces in the parking lots and that suited us fine. 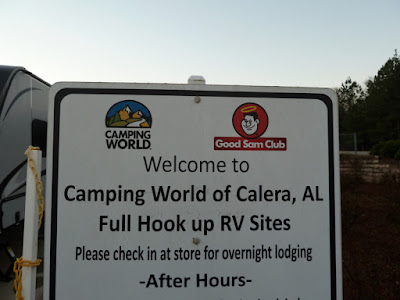 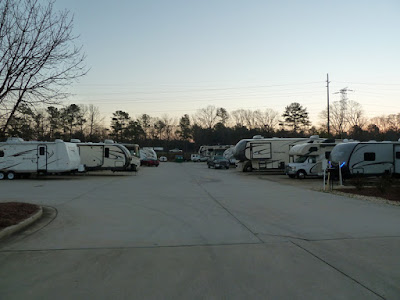 Some of the parked RVs at Camping World 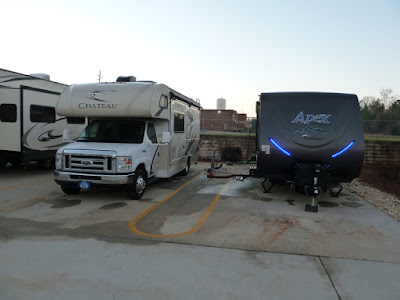 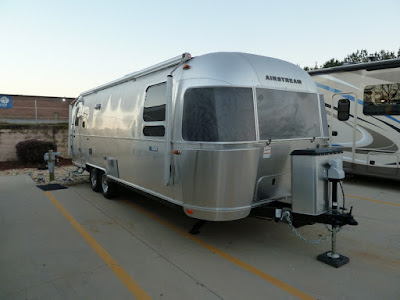 We parked along the large parking spaces 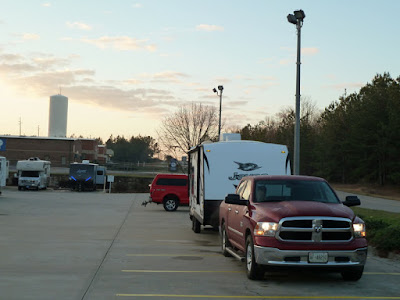 This morning after another good breakfast to start our day we got moving to our destination. The nice thing is that we gained an hour when we crossed the Alabama state line so we had some extra time this morning. 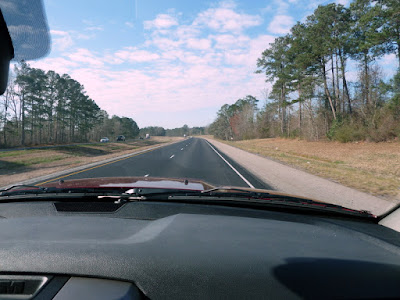 The drive was fine, lots of sunshine and the air-conditioning running in the truck with an outside temperature of 25C. We got to the RV park at "Hilltop RV Park" in Robertsdale, AL and are now parked at the same spot we had occupied a couple of years ago. In the afternoon when we were done with the hook-up chores we got a little sprinkle of rain, which made the air very humid so we ran the air conditioner in the camper to dry out.

Stay tuned for some pictures to come from the park and our site and thank you all for your nice comments and wishes that made our day when we checked into our blog. We appreciated them.

Posted by Marlene Klopfer at 18:49