Only minutes from our house is the Wheatley Fishing Harbor. Adjacent where the fishing vessels are tied up at the basin is the company “Hike Metal” who has a contract to build 6 of the new design Coast Guard rescue vessels for the Canadian Government. Sometimes we walk our two dachshunds along the shore and end up at the launching ramp where we usually turn around on our walk to go back home. There are always interesting boats and ships to look at that location. Just a few days ago Benno took a few pictures of the second of their almost finished Coast Guard boats they built here and this will end up when delivered with the Coast Guard in Vancouver. An interesting article I found in today’s “Southpoint  Sun Journal” caught my eye; you may want to read this. 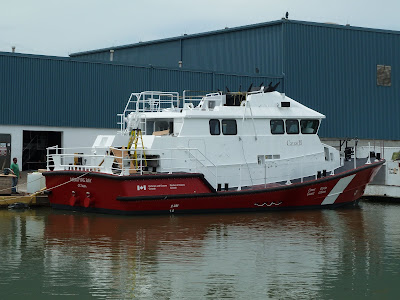 Next Wednesday, June 20th, at approximately 1 p.m., there will be a test conducted in town at the Leamington Marina where one of those Coast Guard vessels will be intentionally rolled over to test its ability to self right it. This might be a unique opportunity to witness such an event. (God forbid should you ever experience such an incident in one of those vessels yourself)  I have included the link to the newspaper article "here"  for you to read it in its entirety. So if interested, come on out to view the spectacle. 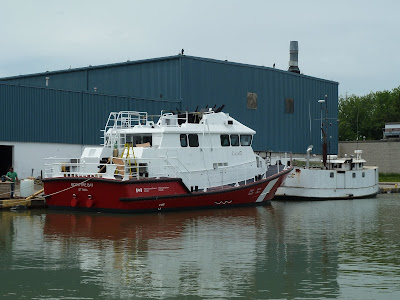 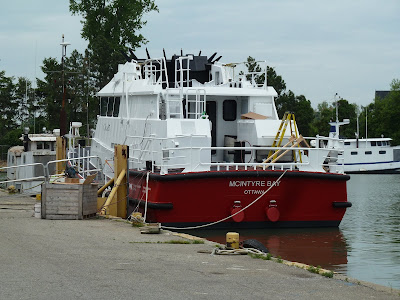 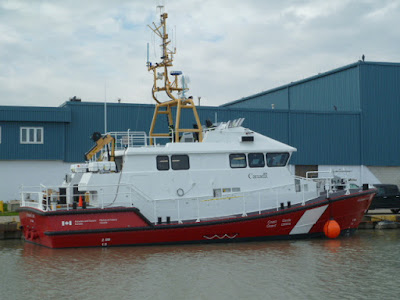 I’ve not mentioned this before in this blog, but back in September of 1983, we received the assistance from an English Life Boat, the equivalent to the Coast Guard Boat on our approach to the coast.  It was after our crossing of the Atlantic from Florida in our 37foot sailboat. As we were approaching England, we got caught in a storm. It was a pretty bad storm and the waves reached such heights so close to the mainland that steering had become difficult. To put it in perspective, the storm was registered as a force 10, gusting 11. (A hurricane is a force 12.) Our landfall was supposed to be the harbor of Plymouth and as we neared it we heard on the VHF Radio that the harbor was closed to all ship’s traffic because the breakwater was under water. We were on a direct course and had already passed the harbor of Falmouth. That meant that we were now in a predicament because we could not turn the sailboat around and power our sailboat into the waves to go back in that kind of weather. The small 3-cylinder diesel was no match for these kind of waves. Our call to the Coast Guard what our options were was answered that we could keep going on sailing to Poole Harbor (in that kind of stormy weather not something we really wanted to do) or, the Life Boat could come out and tow us back into the waves toward Falmouth harbor, which we gladly accepted. Later in the week we toured that Life Boat that towed us in (which is alike to the by Hike Metal build Rescue boats) and were told that it could turtle without any problem but I would NOT want to be in it when or if it did! 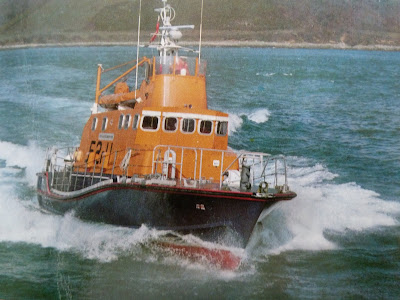 By the way, while eating a take-out dinner of delicious English Fish and Chips that were wrapped typically in newspaper we noticed a write up of our tow and it was reported in every newspaper in the Falmouth area, but there were also some articles of other vessels that were caught in the storm and they and their crew did not make out that well with tragic outcomes.  So we have a great respect and appreciation for the Coast Guard crews operating these vessels in severe weather everywhere. 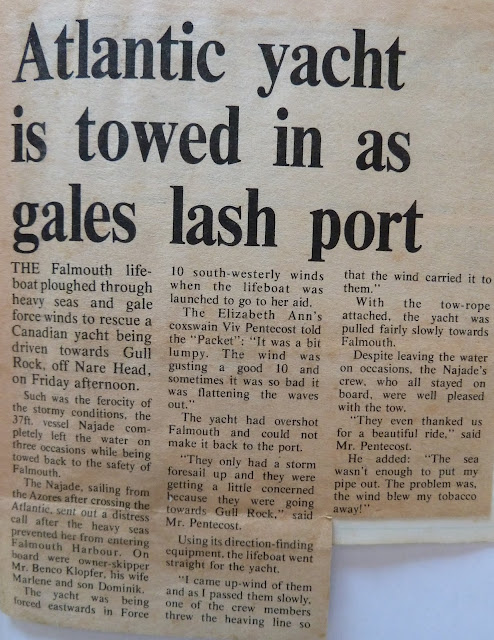 Thanks for dropping in again. I'm making progress with my eyes but not quite there yet. Stay tuned...
Posted by Marlene Klopfer at 17:24