Where are we today?
Wandering Oaks RV Park, Ocala, Florida


Just a few days after my last blog post where I had said that we were snow free, we got dumped with our share of the white stuff.  It looked pretty outside while the snow was falling and we contemplated if it was worth our while to get the snowblower out of the shed. In the end we decided to wait a day to see if there was more to come or if it would melt. The latter seemed to be a good decision as the temps rose and a week later we were practically snow free except for a few piles in the shade. 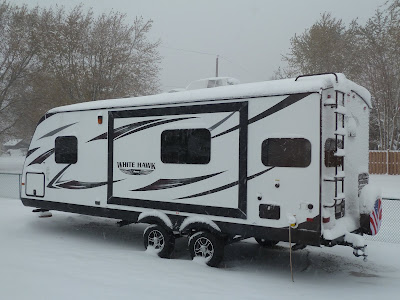 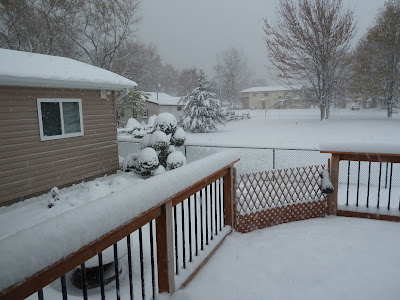 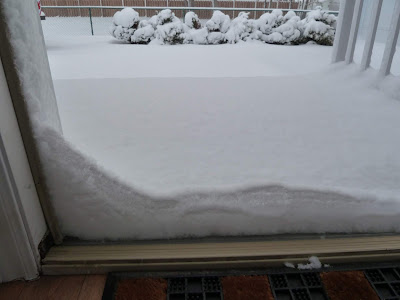 This year our plan had been to leave at the end of November to head out with our travel trailer but with the recent surprise of an early snowfall we didn’t want to risk another surprise when it would be time to leave, so we packed up to get going last Wednesday morning.  All went like clockwork, no hassles and we rolled out of our driveway shortly after 8 a.m. The traffic was light and as we got into Windsor around 9 a.m. We had another 15 minutes drive to the border crossing at the Ambassador Bridge and Benno asked me, “You got the passports?” me: “Check”, Benno: “Got the US money?” me: “Check”, Benno: “Dog papers?” me: “Oops!” Benno: “Shit!” Neither one of us had thought about the vaccination documents as we always have to have them together with our passports and trailer documentation when we pass the booth of the custom and border control into the USA. I contemplated if the dog tags would be good enough but we didn’t want to risk being turned around so reluctantly parked and unhooked the travel trailer at the large shipping and receiving truck parking lot behind the Target Store in Windsor and I drove back home to fetch those darned papers!

An hour and a half I was back and we headed for the Ambassador Bridge. There was not much traffic at the border crossing and only one car ahead of us. The nice custom and border Inspector wanted only to see our passports, NO mention of the dog papers, but had a quick look into the RV and then wished us a nice time during our winter travels and we were free to go.

Driving conditions were good. At home we had scouted on the internet the Gas Buddy website for cheap gasoline, so in Bowling Green, Ohio at the I-75 we filled up for $ 2.16 gal and rolled on to Middle Town, Ohio for the night stop at a Walmart Parking lot. We enjoyed “Seals” on antenna TV, hit the sack about 10.00 p.m., and almost managed to close our eyes when a truck horn next to us got us quickly out off bed. Benno barefooted opened the door. Hey there was a huge tow truck and a friendly driver, “Sorry mate, I like your spare tire wheel cover, but here is no RV parking permitted at Walmart, you have to move or I have to tow you away, but you can park at Lowe’s close by, no problem there”. Christ, we had to move on in our Pajamas, but we did and ended up at the Lowe’s parking lot just over on the next block. Only problem was, their parking lot was sloped. Its funny when you have to walk uphill or downhill inside the trailer but with an extra pillow to level our sleeping position we made do with the situation. 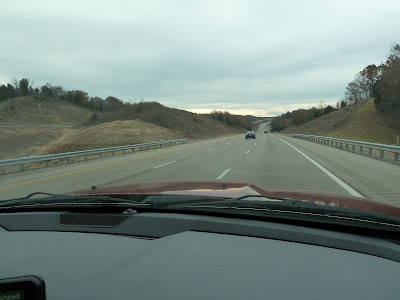 After a good breakfast the next day we resumed our drive along the I-75 when Benno mentioned that he felt a jerking on the truck. He even pulled over to check everything but found nothing and thought it was perhaps the uneven pavement. Then a short while later the jerking was more noticeable and in the rearview mirror Benno noticed that the trailer’s electric brakes came on and jerked the trailer, so he pulled over again. All the brakes on the trailer where hot. They were actually too hot to touch. These are larger brakes than the original ones, which were replaced last spring when we had the trailer’s axles under warranty replaced by the manufacturer. They upgraded the 3000-pound axles to 4400-pound ones, which included larger brakes too. After a short brain storming Benno came to the conclusion that the  Hayes Sway Master, the after market electronic sway controller, could be the only culprit, which activates the trailer brakes. The bugger must be faulty. By pulling the trailer plug out of the Sway Master and plugging it straight back into the truck fixed the problem.  Today, after a search on the Internet, we found that The Hayes Sway Master has been on recall since August of this year. We have to investigate this further.

Thursday night we spent at one of the Cabela’s stores own dedicated RV parking spaces just off the I-75 at exit 353 in Georgia. They also provide a dumping station with water next to the parking lanes. (Jim, from "Jim and Barb's RV Adventure"  had mentioned the overnight possibilities at Cabelas stores in their blog posts and that is why we knew of it.) Late in the evening when we were already dozing off we heard a diesel bus pulling alongside next to us. Benno looked out the window and said that it looked like a prison bus with barred up windows. I thought I would take a picture of it next morning but it had already left when we got up at 6 a.m.

Friday turned into another good driving day. We took the bypasses at Atlanta and Macon avoiding the rush hour traffic. Not knowing how the driving would go we had not made a plan where to spend the night. The further south we went, the warmer or milder the night would be so we drove until sundown. The Walmart Superstore in Lake City was of interest and we got off the Interstate to have a look. My goodness, the place was a zoo. Friday night all of the surrounding area population was shopping there. It took us a bit of time to get out of there and back to the I-75. I checked our catalogues for RV Parks close by and came up with one that said rural setting and horses welcome and Passport America member discount. By the time we drove through their gate it was already pitch dark and the place was deserted. We just parked at a level spot but didn’t unhook being just too tired. In the morning we didn’t like the looks of this park, as it seemed to be circling the drain and have seen better days a long time ago, so we moved on. 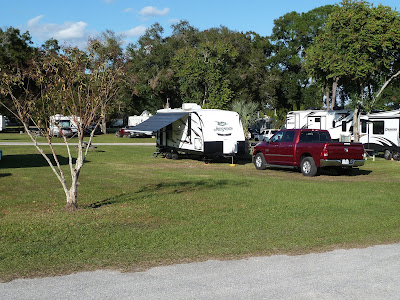 Three years ago we spent some time at the Wandering Oaks RV Resort in Ocala, Florida and had liked it. That is where we are now for one week. The place looks immaculate. The lawns are all expertly cut. There are lots and lots of open green spaces and I think our Reggy and Elsa remembered their fenced-in dog running space as they headed straight for it. 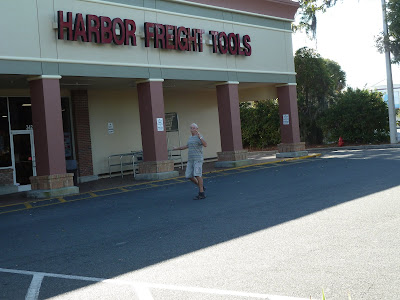 A trip into town got us the needed coax connector Benno needed for the Cable TV and of course he had to have a look at the local Harbor Freight store just because it was on the way too. Hope everyone back home stays warm. We had temps here in the 80ths today. Just saying. Thanks for looking in again

Posted by Marlene Klopfer at 18:32