Good friends came for a visit

How do I get my hubby to sit down to relax and to do nothing?  You’d think with our summer like temperatures of 84F/28C here in Ocala he would be slumped in a chair with a cold beverage. Not my Benno.  His energy level seems to have no limits and he dreams up new projects all the time.  Now that we are living in our travel trailer it became apparent that the factory installed smoke alarm mounted on the ceiling 50 inches from the stove is not a good position for it.  Really! I was just doing Schnitzel in real Pepper Cream sauce with Roesty as a side dish when the smoke alarm came on, the dogs were getting berserk and I was trying to shut off the the smoke alarm by waving with a dish towel. That was an easy fix by relocating this noisemaker closer toward the back of the trailer and the only reminders of its former location are two small white colored, blending in, screw heads sticking from the ceiling. 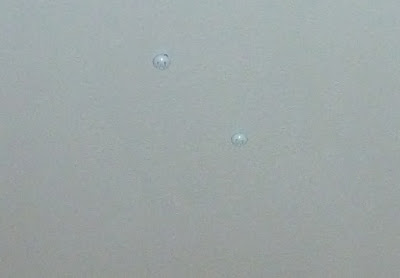 The two screws (not water drops)

But now that the toolbox was already out, a next project was waiting to be tackled.  We had some light drizzle two nights ago and in the morning our truck looked like it could use some cleaning up.
Benno thought it might be a good idea to have a faucet up front close to the hitch, where the truck is mostly parked so we could use a quick connect for the water hose to hose the truck down. Our trailer came with an outdoor shower hook-up located on the service side at the back, but that would be a long run for the water hose. So you know where this is leading. Yep, Benno installed a faucet up front underneath the trailer. He now has a choice which water hook-up to use, depending where the truck is parked. 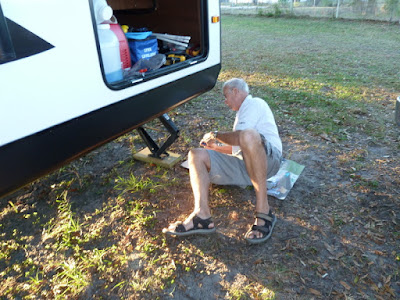 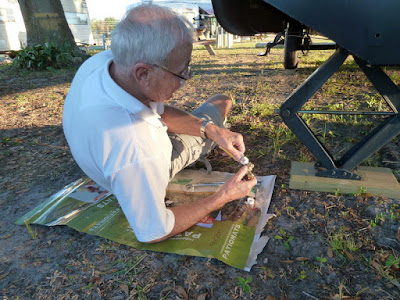 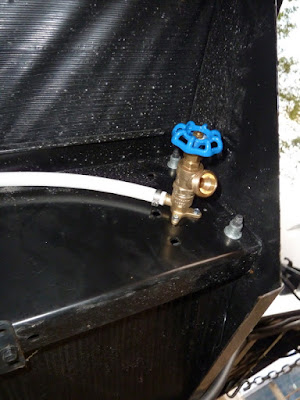 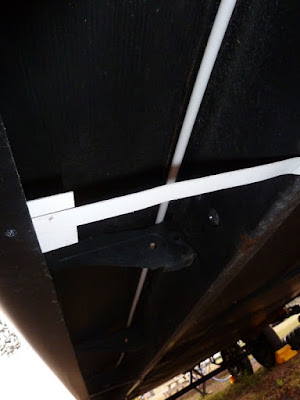 A couple of good cruising friends, who we had met back in 2006 in the Bahamas, have a house in Jacksonville, FL.  Linda and Ed were going to be in the area yesterday so we all agreed to meet up here at our RV site. It had been a while since we had seen each other (Nov. 2012), but thanks to Facebook, emails and the fact that we both have websites helps to keep up with each of our lives and travels.  You can read about their adventure on land camping out west and sailing on their sailboat “Dreamtime” in their website: http://svdreamtime.com.  We had a good visit, albeit too short but hopefully we will have another opportunity next year. 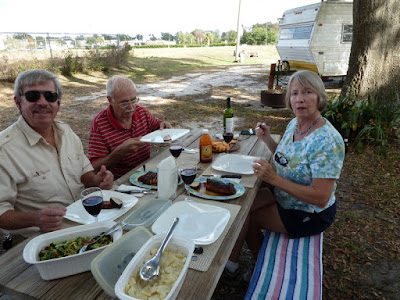 As a side note, Benno is harboring the plan to order the Hayes Sway Master, which is an electronic sway controller with an incorporated electronic Gyro and GPS inside. He thinks after the hair rising travel experience between Detroit and Toledo this would be a good addition to the safe towing operation of the trailer.
He likes to let our technical readers know that the bicycle carrier has not fallen off the rear bumper or the bumper’s welding seams have not developed any hairline cracks during the ride from Canada to Florida, specially on the bumpy section of the I-75 at the money strapped city of Detroit.

So, today being Sunday it’s time to rest and do nothing but we are already making plans for tomorrow….

Posted by Marlene Klopfer at 12:56