Where are we now?
Town and Country RVPark, Roswell, NM


Last Sunday we left Rose Valley, RV Park in Silver City, NM heading further east. We had heard of the famous Roadrunner along the I-10 and made that our destination for a lunch break. It sits on the property of the rest area on the south side of I-10, about two miles past Exit 135, just west of Las Cruces. This sculpture of a Roadrunner has been constructed exclusively from recycled materials. It has become a landmark and you cannot miss it as it is 20 feet tall and 40 feet long and we thought it is worth a stop. However, you can only get to it from the eastbound lanes, which we travelled anyway. From afar it doesn’t appear to be constructed from junk out of recycle centres and one might think it was made from wrought iron but upon closer inspection it is really fantastic how the artist managed to get the desired effect incorporating all kinds of rubbish. I tried to photograph it as best as I could, but I think Al from “The Bayfield Bunch” a top-notch photographer did a much better job of it, please look at his pictures and click  "The Bayfield Bunch" for the link. 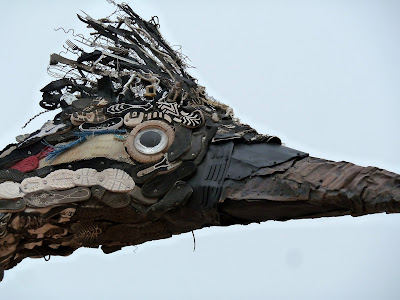 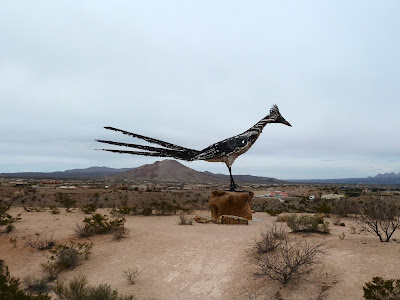 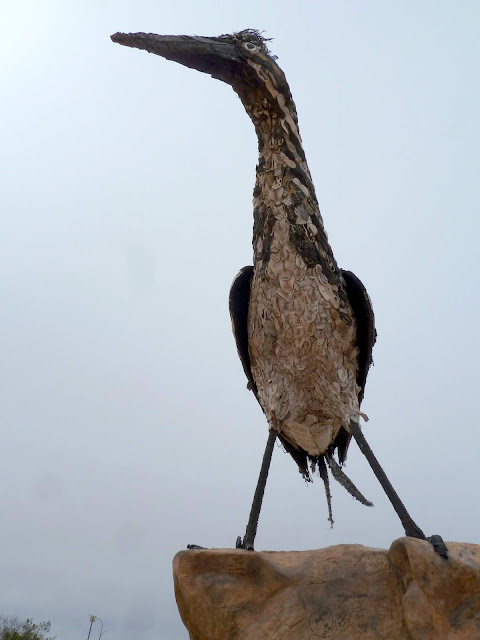 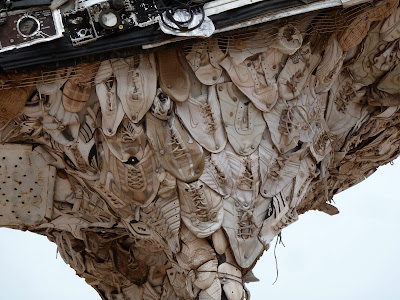 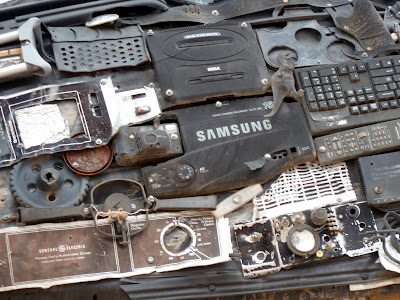 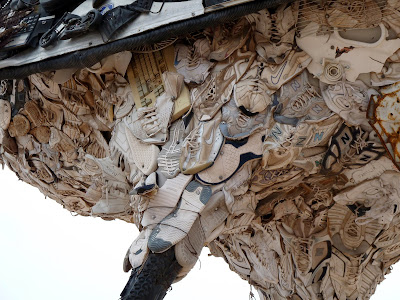 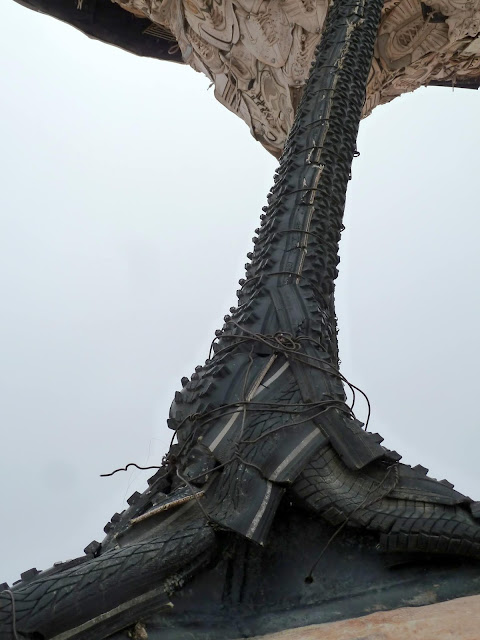 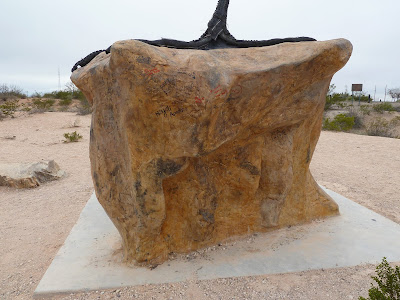 Driving further we passed “White Sands” where the sand dunes are the whitest I have ever seen. Imagine huge sugar hills! We were not able to stop, so no pictures.
While driving on US-70 we stopped to take a picture of the road sign for the Holloman AFB across the street. Our niece, Judith is with the military in Germany and she had been there to take a course at the Holloman AFB a few years ago. So this picture is for you, Judith. 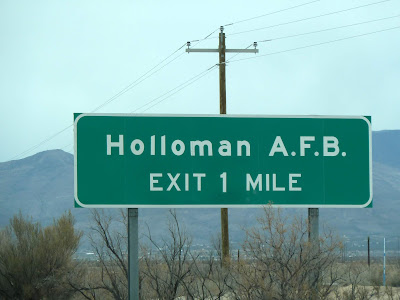 We overnighted at a Walmart parking lot in Alamogordo, NM. The place was hopping when we got there in the afternoon but we found a good parking spot on the side and just rested for the afternoon/evening.  The next morning there were 10 RVs parked around us. Walmart has also a gas station and the price of $2.11/gal was the lowest we had seen so far. Sadly, it was only set-up for credit cards, no cash and our Canadian credit card would not work in the machine as it required to put in a 5 digit Zip code, which we did not have, because we use postal codes in Canada that have a combination of letters and numbers. A little further down the road we filled up for $2.14/gal, so that was ok too. 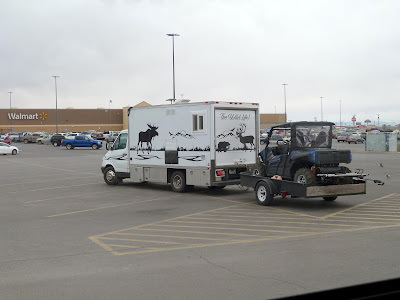 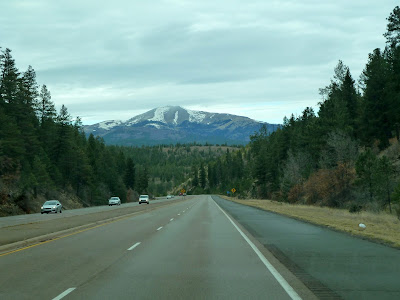 Our destination was Roswell, NM, a town famous for flying saucers, UFO and visiting Aliens. Along the way on US-70 in the town of Ruidoso Down, NM, I noticed artwork on display by the roadside and voiced that it would be fun to see. Benno did me a favor and stopped the truck so I could have a look. I marveled at all those garden things and carvings and took some pictures and then we drove on. A little further we saw another bunch of statues and Benno even turned the truck with travel trailer in tow around so I could go to see those too while Benno waited in the truck.  There were lots of stuff to see but as I was going around the displays to the back I couldn’t believe my eyes. Down there was the “Mother Load” of all garden art, statues and Mexican decor. There were workshops, where they did the chainsaw carving of statues incl. aliens in all sizes and there were warehouses full of all kinds of imports and other locally made carvings and such. My golly, this was more than I ever had hoped to see, I ran through half of it and then called Benno over so he could have a look also as he had been wondering what took me so long. Taking more pictures was pointless as I was totally overwhelmed by the sheer volume of it. 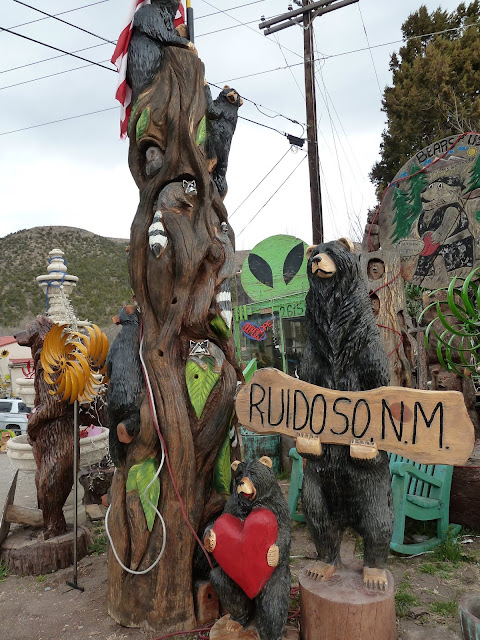 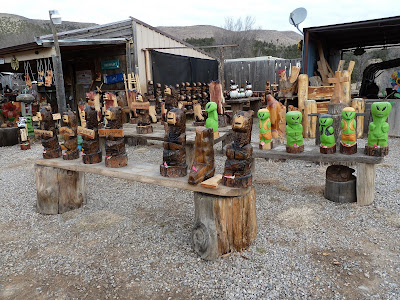 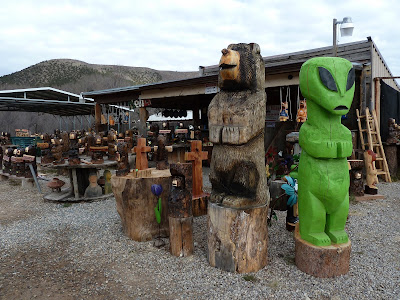 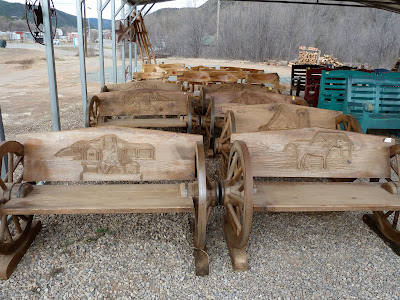 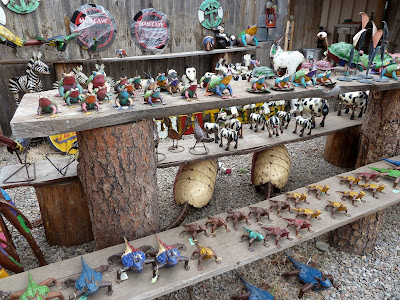 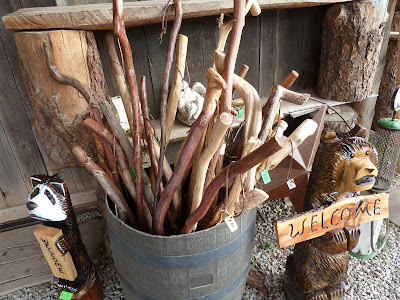 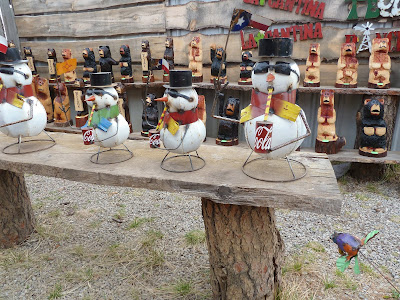 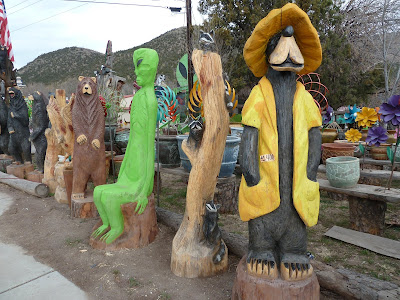 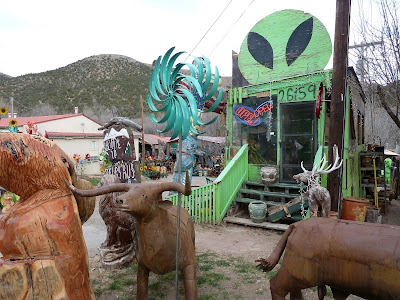 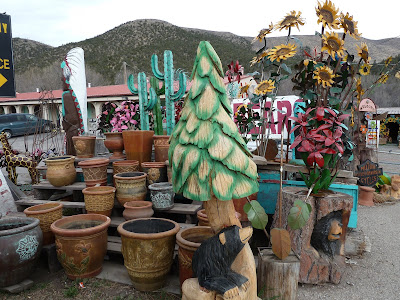 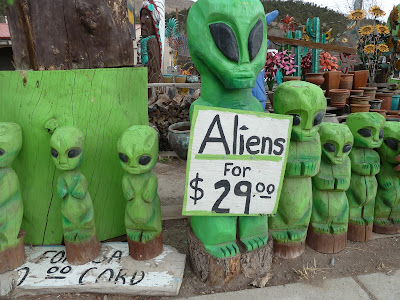 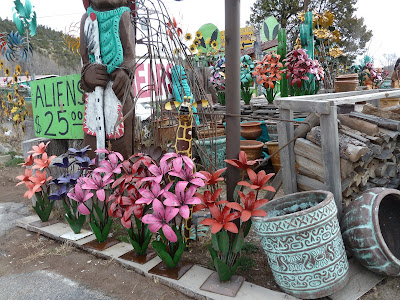 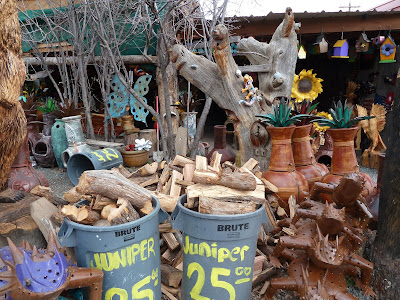 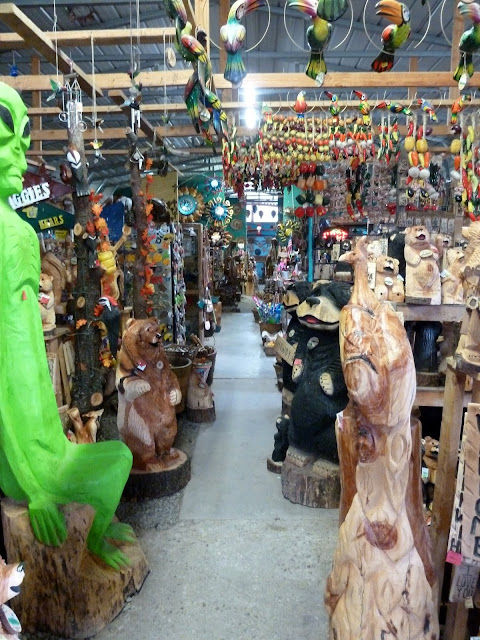 So if you happen to be in the area, you might want to have a look yourself.

Posted by Marlene Klopfer at 19:04