Yesterday morning we were greeted with a layer of frost on the ground when we woke up.  Brrr, I’m not ready for winter weather and hopefully we will avoid it altogether.  As soon as the sun was out things looked so much better outside and in the afternoon we decided to cut the grass one more time, maybe the last time this year  (hopefully). 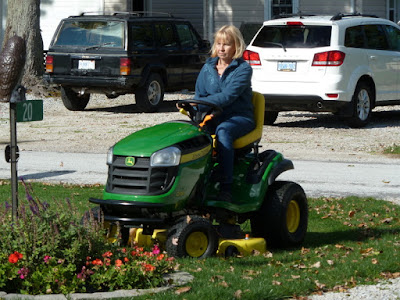 We’ve got quite the routine doing this chore. Me, riding the “Green Machine” lawn tractor, Benno using the self-propelled Husqvarna push mower with Honda gas engine where I cannot get at with the big machine. When all is cut, I go around with the weed trimmer to trim along the fences from both sides. However, we recently bought more property from our neighbor and now the process has grown to a bit more work and time to accomplish this task. In addition there are large trees across the road and the wind had blown the leaves onto our properties.  Benno uses the leaf blower to help with the piles, but it takes still some effort. 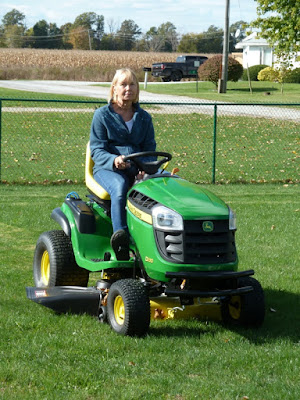 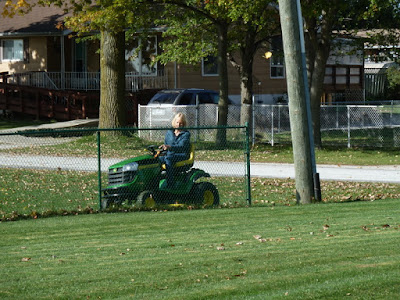 At this time of year one does not know how the weather will cooperate.  Most RV folks are getting ready to leave the campgrounds if they haven’t done so already.  Benno winterized our travel trailer because we don’t want to take any chance of freezing temps to damage the tanks and water lines before we are also leaving for warmer climates somewhere south of here. My husband is eager to turn the “White Hawk” trailer around for an easy hook up, but we have not made up our mind when to depart. Will it be at the end of November or will it be after the Holidays.
It was time for me to collect my fairy garden and various statues to put them away to sleep until next spring.  Sad to see it all disappear. 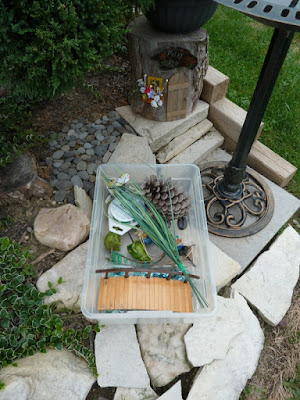 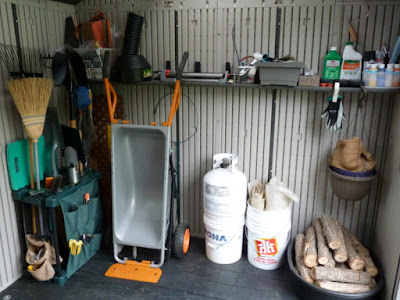 They are calling for a snowfall in Ontario this coming weekend. “Good Heavens”
So, do I rearrange my garden shed to park the snow blower in front or, do I keep the lawn tractor up front?  I pray that the snow blower will collect dust!!! 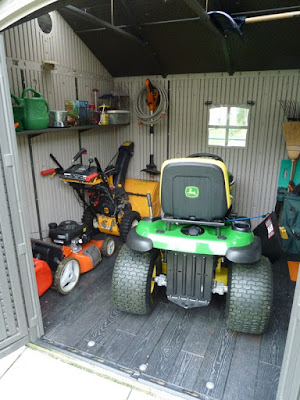 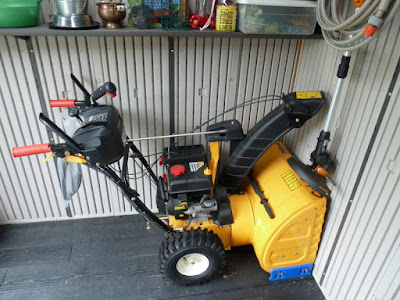 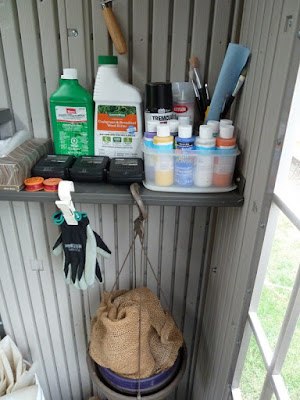 That was quite a busy afternoon for us working in the yard, but we were on a roll and many of our neighbors were out too with the same tasks.  Finally we were done and it was time to cook some dinner.  Guess who had some boredom while we were working outside and decided that our made and orderly bed would be a good playground? 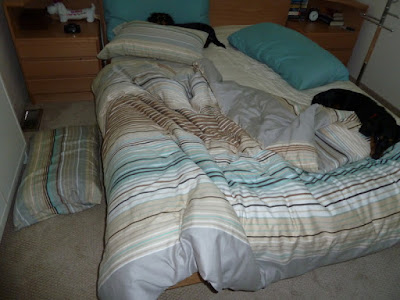 On Saturday, while I was out taking our two Dachshunds for a walk, a passing van stopped and the gentleman asked if our Doxies were entered in the upcoming Wiener Dog Race.  That took me by surprise because I didn’t know about it. A quick search on the Internet and a Facebook inquiry brought me to the Lakeshore Horse Race Association. Part of yesterday’s Harness Racing on the Leamington Raceway there was to be a Dachshund Race after the 8th Horse Run. I called the number given for registration and inquired if our dogs could be entered for the event.  YES!  There were only 10 dogs per race allowed and three races plus the final race of the three previous winners was scheduled.  Reggy was entered as number 10 for the first race and Elsa got the number 10 for the third race. 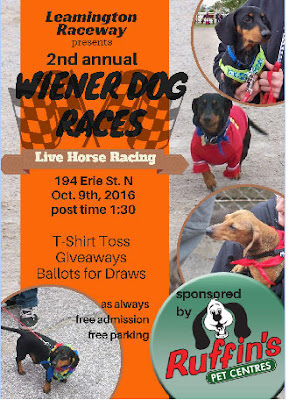 Reggy and Elsa are not even a year old yet and we had no idea how this event would unfold. They have never raced in a competition, but they sure run and chase each other around the house a lot.

We arrived at the requested time for registration. The dogs in the first round of races received a red scarf with their racing number printed on and the owners got a corresponding sign to be pinned onto the back of our clothing.  The second race got blue and the third race received the items in white.  Because we had two dogs in two different races we both wore red and white signs on our backs while Reggy wore his red and Elsa her white scarf.  There were several horse races until it was time for the dog’s turn to race during which we all mingled through the crowds of onlookers and race enthusiasts.  Reggy and Elsa really liked meeting the other contestants. There was a lot of tail wagging, sniffing and woof, woofs going on. 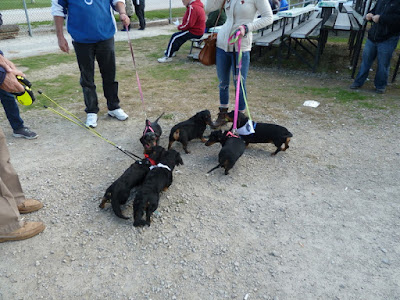 Sniffing out the competition 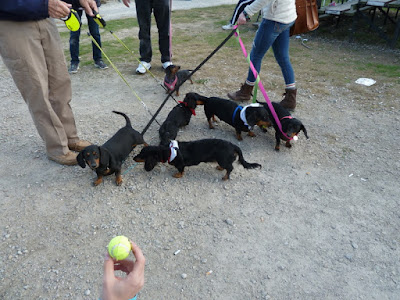 Then we were all called to get out onto the racetrack.  Because we had number 10, we were last and at the outer side.  Benno had barely got into position with Reggy, when the start shot was given.  Forty little paws started sprinting across the dusty raceway while the owners and onlookers shouted and screamed the names of their dogs.  There was one little problem though; most of the dogs didn’t know where to go.  I stood at the receiving end with Elsa on her leash, but Reggy never saw us, he ran diagonally to the corner toward number one where the most commotion came from.  He did really good and must have been disappointed not to find me there.  No, he did not win, but he won the hearts of many spectators. 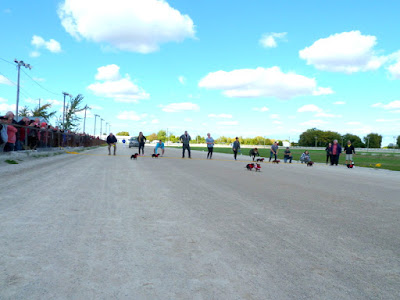 The moment after the start shot 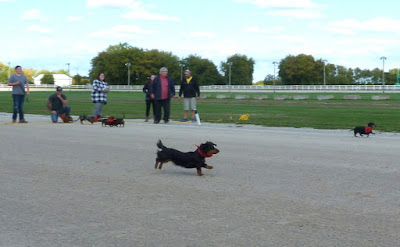 Reggy is racing, however not towards me
When it came to Elsa’s race, the same confusion of where to find mommy happened.  She ran into the middle crowd lost and bewildered. We had a lot of laughs though and both dogs were happy and excited.  The rewards were two bags with goodies, like dog cookies, treats like: “Canadian Bacon with Blueberries” (Made by Northern Biscuit), a roll of green poop bags in each, from the sponsoring pet store and a couple pieces of Kielbassa sausage from us. What a fun day we had because the Wiener Dog Race is not about ambition and performance. The focus is mostly fun for dog and owner. 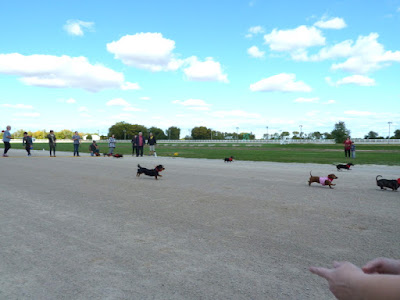 Everybody is running to the same corner 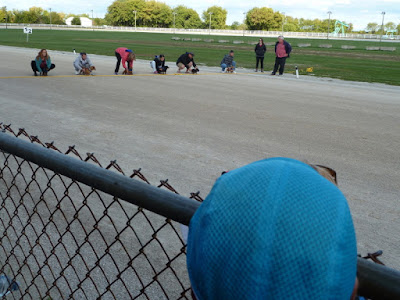 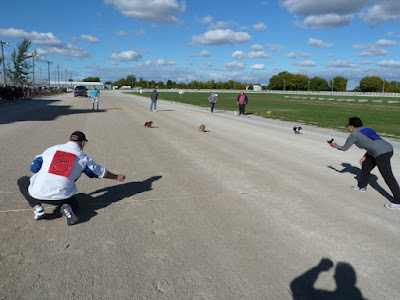 Dachshunds were originally bred as hunting dogs. They will hunt for rabbits and badgers. They come in many different shapes, colors and lengths, short, long and wire hair.