So a little update on Benno’s fun! hobby-boat project is due. The weather had been great for the most part since Albatross came into our lives. That made the outdoor jobs so much more pleasurable.

As I had mentioned, the first little chore was to install an electrical outlet (the same as they are used on RVs) on the port side of the wheelhouse. Now we could plug an extension cord in it that would feed another extension cord inside the boat to let Benno use his power tools as well as an LED overhead light in the cabin above the engine compartment.  After taking most of the loose items and seat cushions out of the boat for storage and to protect them from dust, the real work could begin. 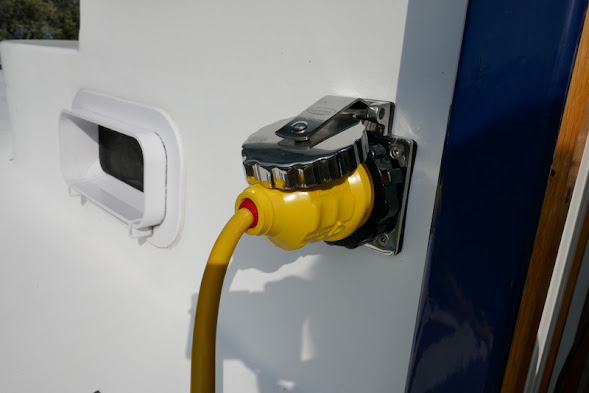 There were three brand new Trojan 12V AGM G31 batteries stored to both sides of the engine. These are the house bank batteries that are used to power all the 12V electrical needs of the boat. Benno removed them from their location as they will get a new spot in the boat after the engine compartment is rebuilt. They are very heavy (83 pounds each) and their custom built boxes where they were housed were also removed. For the wintertime they have to come out of the boat and to lift them and carry them down our step ladder would be a really strenuous job, so Benno backed up our truck to the boat and lifted them one by one down from the aft deck onto the transom swim platform and from there onto the truck bed. Then he backed the truck up to his shop door where it was a short lift to put them inside for storage. 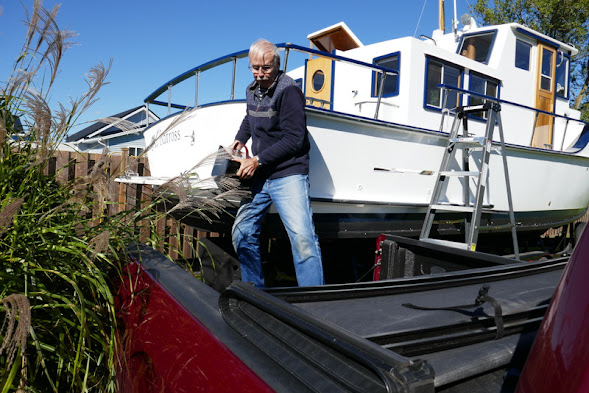 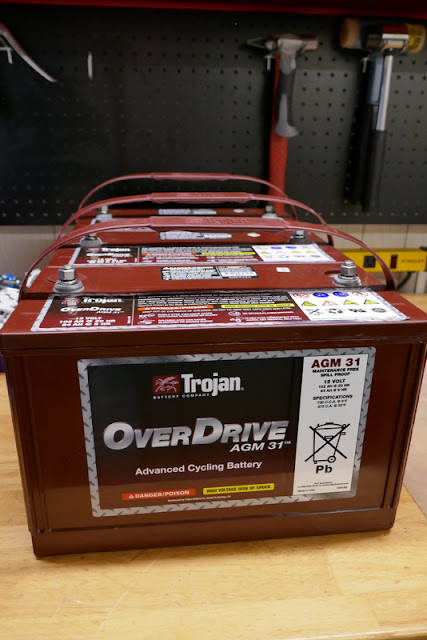 The plan is to remove the present engine. It is an older Perkins 4-154 Marine Diesel motor, 62 hp with a Hurth gearbox. We were told it was in running condition but hadn’t been tested since the boat was stored on its trailer. This pretty and well-built trawler deserves a new motor. Benno is planning to replace this engine with a new motor, which he will purchase perhaps at the coming January boat show to reap the 10 % boat show discount . In the meantime he will restore the engine compartment as the old soundproof material had become brittle over time and overall some rewiring will be needed. The problem though is, the motor was probably installed before the boat was being finished meaning, it cannot come out as it is, as it does not fit through any door or window and there is no hatch in the wheelhouse roof. 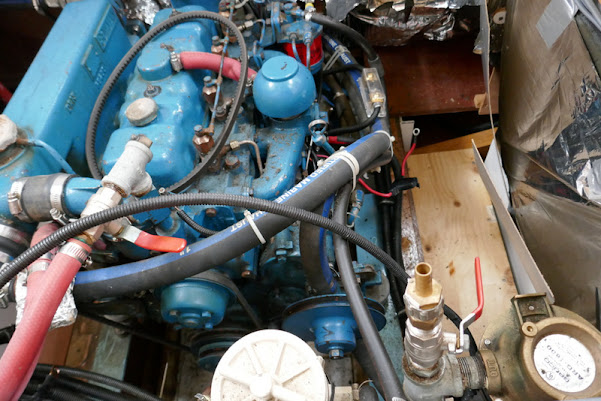 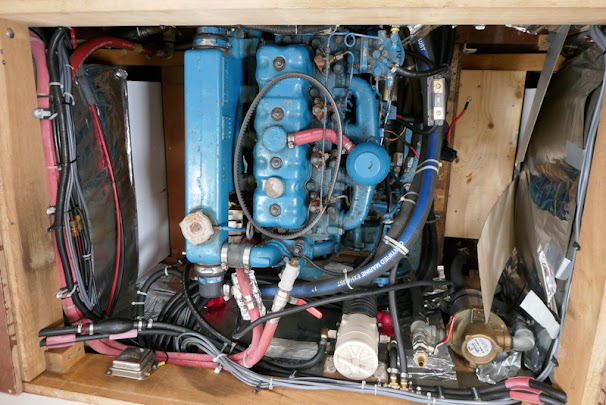 For several days Benno had been dismantling this engine monster as much as he was able to inside that engine compartment, to slim this motor down. All the parts and hoses are being put aside for reassembly as needed. But, the engine is still in its hole! The estimated weight of this motor is little over 800 pounds. So how do you get it out? We do own a couple of hoists, one of them is a ¾ ton with chain that could do the job, but where do we hang it from? Paul, a friend of ours, who is a retired welder with his own shop offered to make us a custom gantry that can be set up in the small floor space both sides of the wheelhouse next to the engine compartment to help lift this brute. Then we will have to slide this motor through the salon of the boat on greased and supported 4x4 beams onto the back deck and from there we have to lift it down. Easy isn’t it. Haha! Stay tuned for that undertaking as it will be interesting! 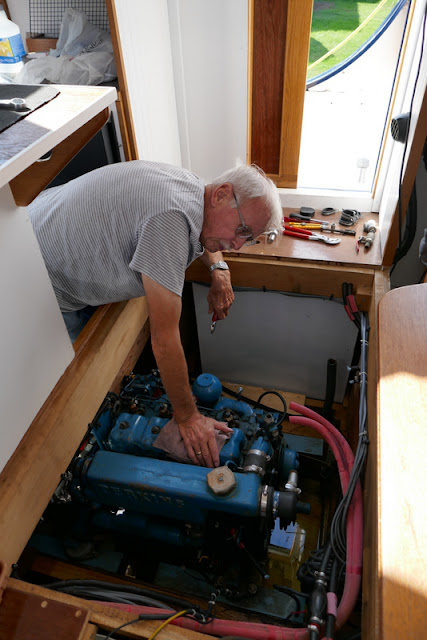 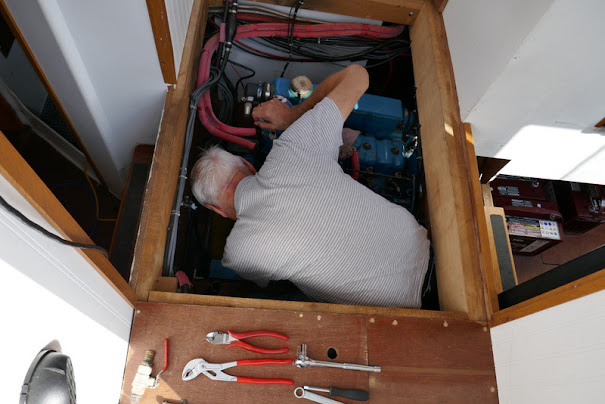 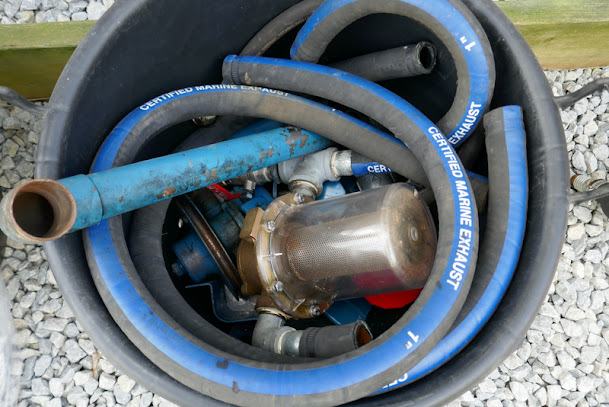 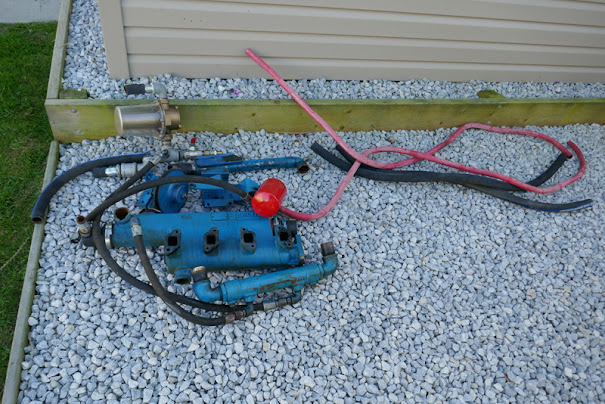 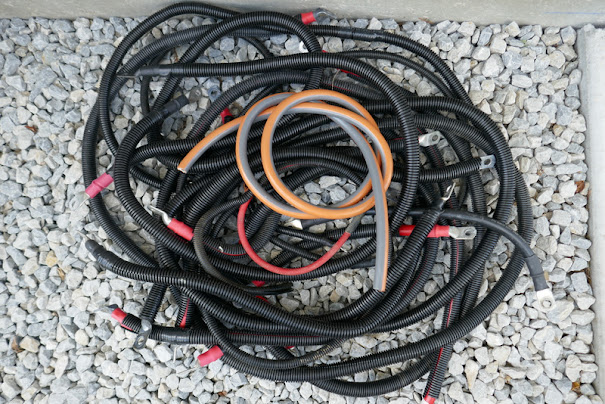 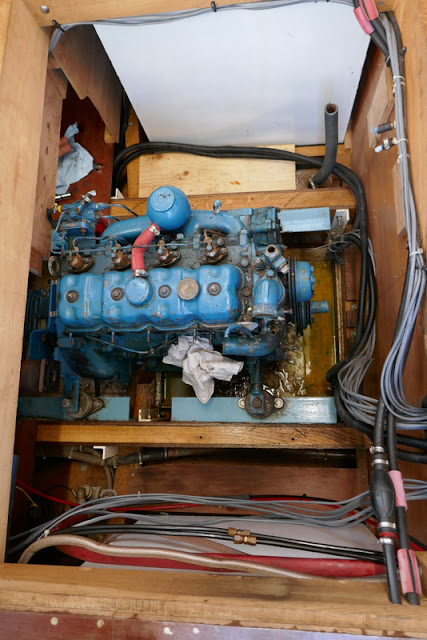 While we are waiting for Paul and his creation, Benno kept busy. The transom platform needs some work so he removed it as well as the supports and ladder for the time being. This gives us a little more room to walk around the boat too. 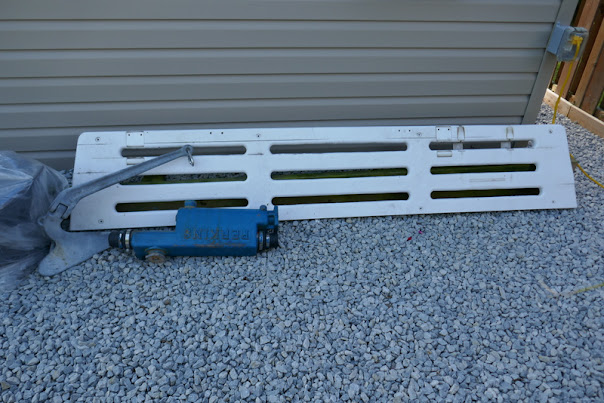 There are several tanks on this boat. Under the aft deck is a large compartment for storage as well it houses two 55 gal polyethylene tanks. One is empty and has never been used and was not even hooked up, which will be used as an additional fresh water tank. The other one is a waste holding tank. This boat really doesn’t need such a large poop tank and we could install a smaller one up front closer to the bathroom/head compartment. So this tank, which still has some poop in it is coming out and that will be no fun! I have to mention that the compartment where the tanks are located is very nice and you can see what a lovely job her builder John did building this sturdy and well made boat. He used beautiful oak wood and his workmanship is excellent. 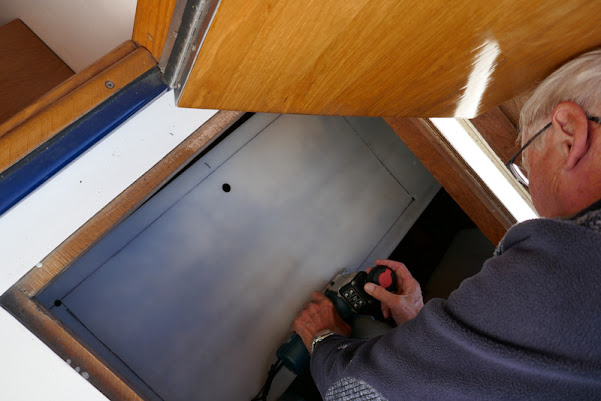 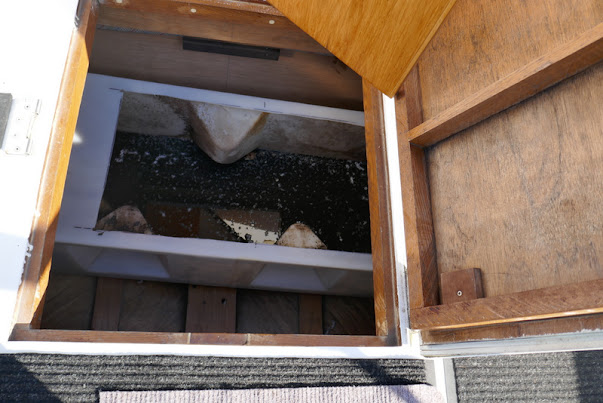 So Benno’s character-building job for the day was to cut open this tank, empty what was still in the tank, dispose of its contents, clean it and then cut it apart so it would fit to be lifted out of the storage compartment.  I did not help and stayed far away, the smell was no eau-de-Cologne. I only took pictures and left him to finish up. 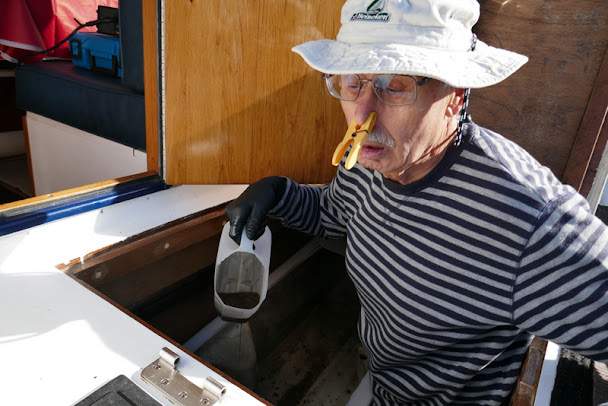 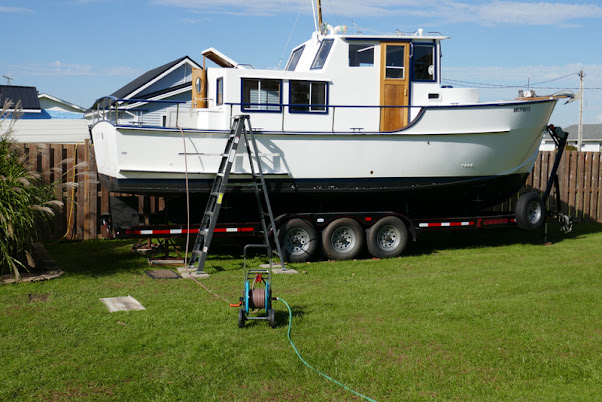 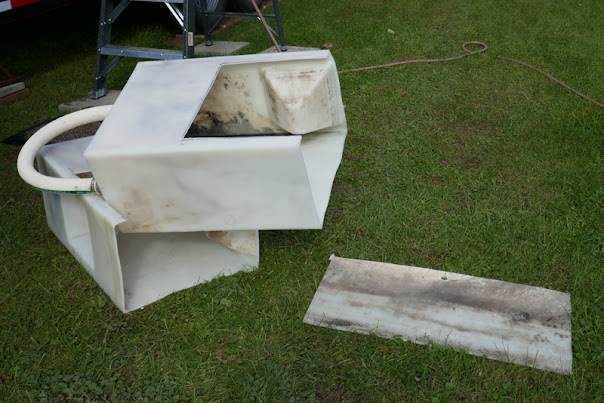 Since the announcement that the USA border would be opened up to us Canadians the first week of November, we have been contemplating if and when we would be heading south with our travel trailer. Several phone calls revealed that many RV places are already booked up, so we are still searching and considering our options.

Thanks for dropping by and please check back in soon, and oh, look what our nice neighbor Teresa just brought over to sweeten our afternoon! Thank you Teresa. 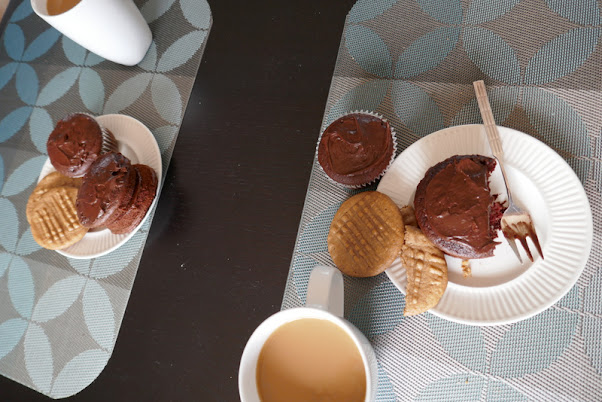 In my recent blog posting I wrote that Benno flew out to see a powerboat in Prince Edward Island. It turned out that the boat was not what he was expecting and so that trip was for nothing.

However, the persistent hubby of mine kept searching for a trawler type boat that would fit all his criteria. Having built our 37ft sailboat “Najade” and our 41ft long-range trawler “Diesel Duck” he has so much knowledge and experience of what it takes to outfit a seaworthy vessel. It is not his intention to build another boat and we are not planning another cruise on the water, but the potential should be there.

Jim from "Jim and Barbs RV Adventures" made a comment “Benno’s dream boat is out there somewhere!” he was right. Yeah the dream materialized and is now parked next to the house, Hurrah! 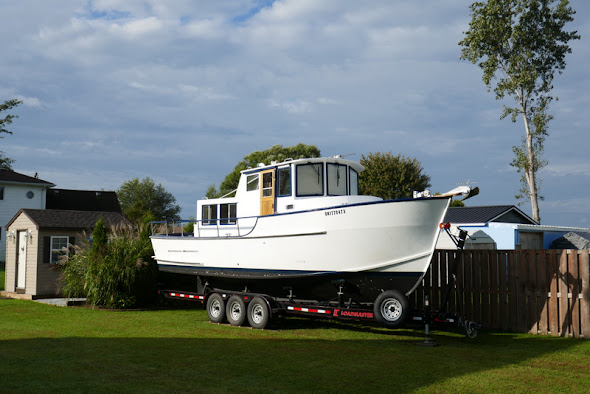 In the Kitchener, Ontario area there was a “Jolly Roger” design boat for sale. She is a pocket trawler of 33 feet in length. She was lovingly built by her owner over a time span of 7 years and used afterwards at Georgian Bay of Lake Huron’s Ontario cottage country where he also has a cottage. She is named “Albatross.” The trawler sits on a new custom built three-axle trailer to transport her and to keep her on for storage.

Benno envisioned that this little trawler has lots of potential, if it is brought into modern-day standards, and it would be a great project for him as a hobby.

Last Tuesday we got up at 4 a.m. to drive to the trawler’s location near Kitchener to be on location for the transport of the boat and to follow the truck home. We had her transported by Rob from Bentall Boat Hauling to our house here in Leamington. The trawler’s weight is a lot more than our Ram 1500 pickup truck can haul and the 11 ft. width for transporting the boat on the highway is 3 ft more than the standard 8 feet, so it is considered a wide load. Transporting her was not really a problem and Rob professionally transports boats daily and said it towed beautifully.

Now she sits in our yard next to the fence and close to Benno’s shop. Because the ground is very soft, the first thing on the agenda was to place planks under her tires so she will not sink any further into our lawn. For that job Benno used the three 12 ton hydraulic jacks we still have from the renovation days of our house and a past tire problem on the RV.

Next will be the installation of a shore power outlet to Albatross so we don’t have to hang an extension cable through the door or window. Stay tuned for that and many upgrades and improvements if you are interested in this project.

In the meantime I will post also other subjects as well and of course if we do happen to travel south for the winter that would be captured too.

Also in loving memory of my brother-in-law, Benno’s brother, Wolfgang, who passed away last Tuesday. He would have been 75 this Thanksgiving.

Thanks for dropping by again and see you in a few days...
Posted by Marlene Klopfer at 19:02 16 comments: