Hi, I’m back from my trip to Germany.  Actually, I’ve come back several days ago, but I got immediately immerged into several projects here at home so that posting in my blog fell to the wayside.

Travel time to my parents house for anyone interested is a 20 hr. event and I’m up without sleep more than 36 hrs. It involves the drive to the Windsor Airport from our house, my flight to Toronto, then to Frankfurt Germany and on to Hamburg Germany, a train ride from the Airport to the Central Station and from there a fast train to a neighboring city close to my parents town and from there a car ride to their house.  Included are the waiting times in-between flights and delays!! Germany is 6 hours ahead of EDT (Eastern Daylight Time) so I’d been jetlagged there and coming back.

How do you kill time during the 8-hour transatlantic flight? One way is to getting entertained by watching several in-flight movies, snacking on pretzels and a Bailey on ice for example. 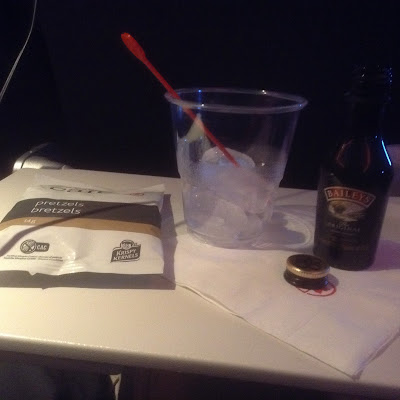 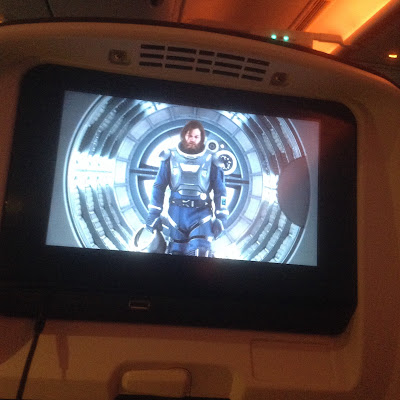 In my pre trip preparations I spent a lot of time on research as to what changes I might suggest and what services would be available in order to help my parents in a new situation.  I am happy to announce that my Dad’s recovery went very well.  Also my Mom is doing better considering all the ailments and pain that she has to cope with.  If you’ve been driving a car for over 60 years and all of a sudden it is being suggested that it is time to discontinue that practice, it must be hard to swallow.  Hopefully I’ve been helpful in the transition while I talked my 92-year-old Dad into driving a spiffy 16 km or 10 miles/hr. Scooter that is even allowed on the road but does not require a driver’s license and he doesn’t have to walk to the supermarket to get a few groceries!  Now, when is Mom going to get one too? 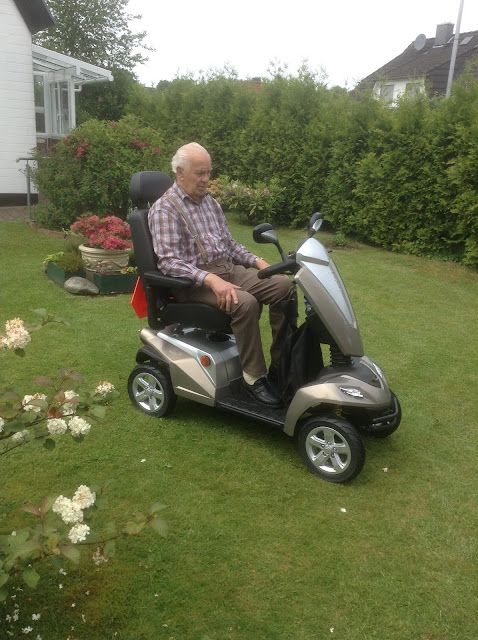 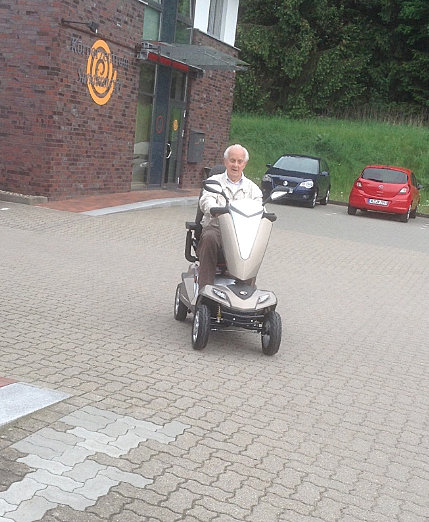 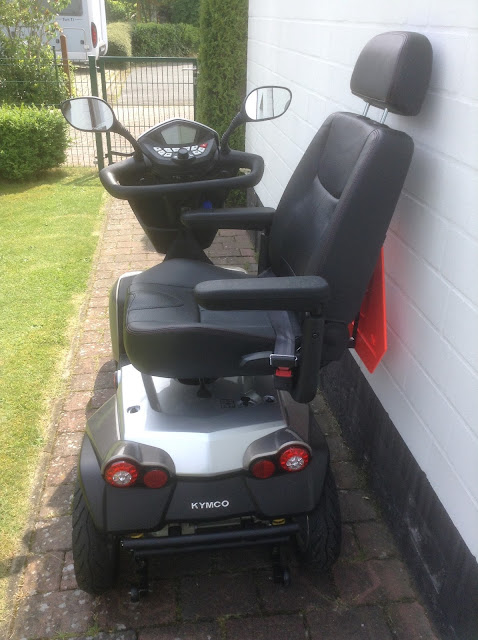 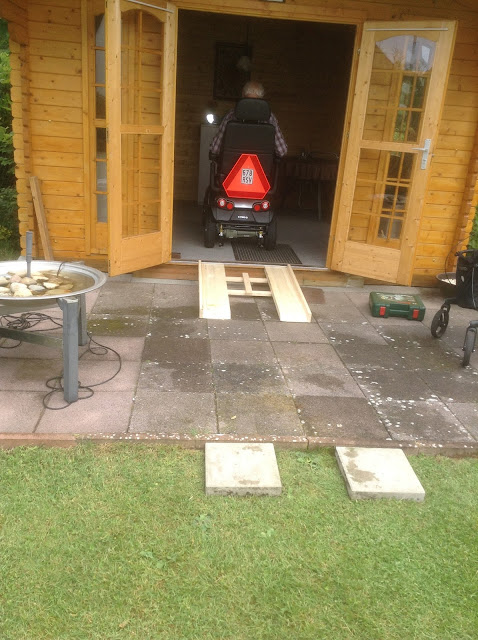 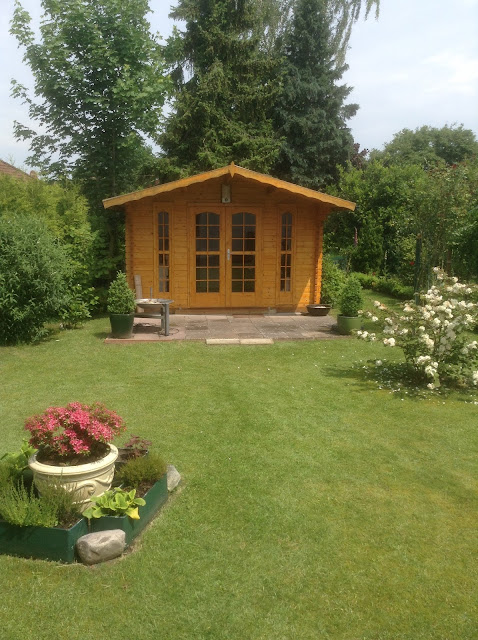 My parents have a beautiful property and garden that I wish it were mine.  Wait! It was mine for the duration of my stay and at times I didn’t know if I ripped out a weed or a seedling while trying to get in control of the flower beds that had been waiting for my arrival. 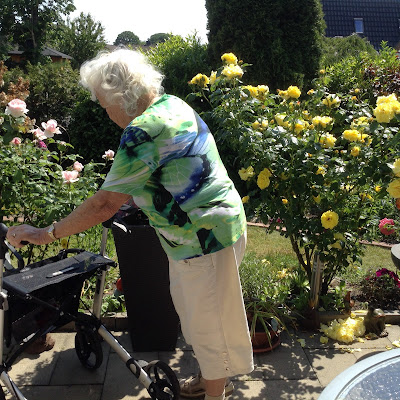 I thought my parents had a great idea when they converted the fire pit into a water fountain and the birds liked to drink from it also. Speaking of birds, the very next day after I had posted about our Robin’s nest, all three Fledglings hurriedly flew out just as I was going to have a look.  The birdhouse has been empty since then but to my utter surprise a new Robin’s nest has emerged in our Clematis plant at my garden shed.  How those spindly vines support the nest I have no idea but it looks like there are at least three young Robins in it and the parents take turns all day long to feed them. 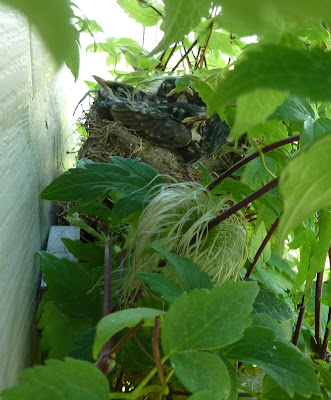 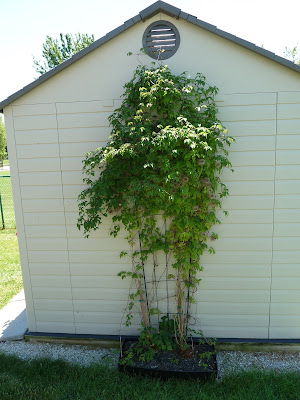 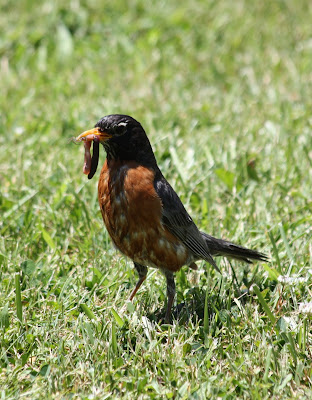 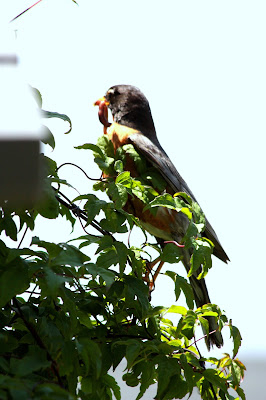 During my absence Benno had not been idling I discovered.  The runoff water from the rain gutter had been eroding part of the grass next to the house.  The ground is sloped and I had considered making a trench and creating steps to rectify that eyesore upon my return but Benno had a better idea.  He dug out and made a large hole in a triangle shape next to the walkway, that he boarded up with a plank and disposed of all the dirt.  It was a lot of clay I was told and then he waited for my return to finish the job ;-)  Together we hauled with our utility trailer three loads (buckets) full of gravel, which we poured into this catch basin that I had lined with a landscape mat.  This new invention passed the test, all the rainwater disappears into the gravel and no more water eats at the grass.  Why hadn’t I thought of that? 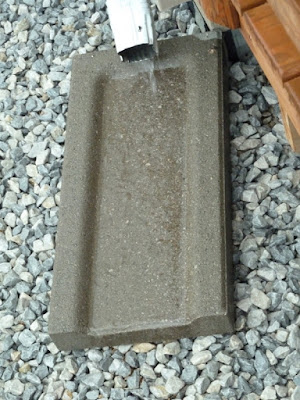 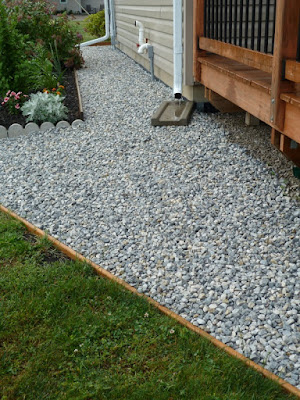 And while at the topic of water, this might be of interest to our RV friends.  Lately we had no reason to visit, i.e. go into our camper because it is parked right next to the house.  Benno washes it regularly and it looks like new.  Two days ago Benno went in and to his horror found the floor in the entrance way wet.  What happened?  The first thought was a window had been left open.  No! Rain came in from the slide-out. No!  The door doesn’t shut tight. No again!

A quick search in the galley underneath the sink in the counter and where all the water connections are to and from the water heater, a straight plastic Pex stop valve had popped the O-ring and was dripping a steady amount of water. Enough to get us jumping! 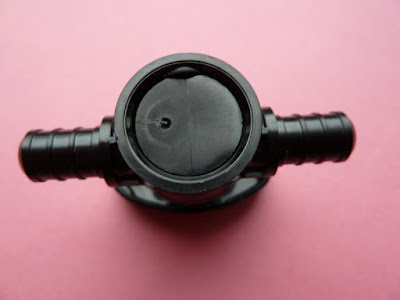 The famous In-line water regulator, which we always use in RV parks to police the incoming water pressure somehow did not get mounted here at home in trust of our own city water pressure. This was like a shot in the foot; our city water must have coughed up more than the usual pressure and bingo, this blew an O-ring. 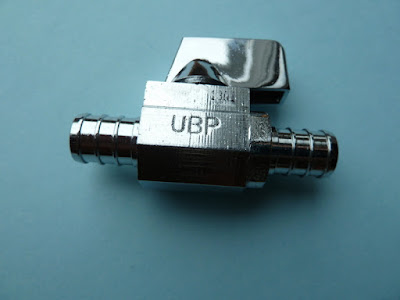 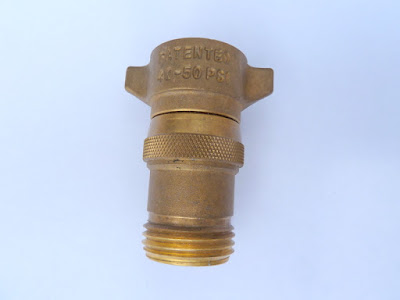 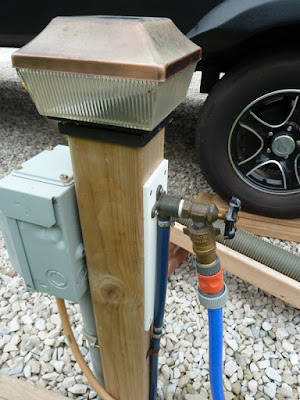 Since my return home I have tackled several garden related jobs but of course I forgot to take pictures. My brave husband had watered my flower beds like I had trained him, but he watered the weeds too. Yep! When I got back from my trip and looked at my flower beds I went down on my knees but not to cry (I almost did), but to pull the weeds for days to come!!
Hopefully my faithful readers will forgive me and I promise to take my camera with me in the future.