Two weeks of extreme heat and what have we been up to?

Already two weeks have flown by since I posted last. We’ve had extreme hot temperatures here meanwhile ranging in the mid to upper thirties Celsius coming close to 100 Fahrenheit and with high humidity had us breaking out in sweat as soon as we stepped outside. 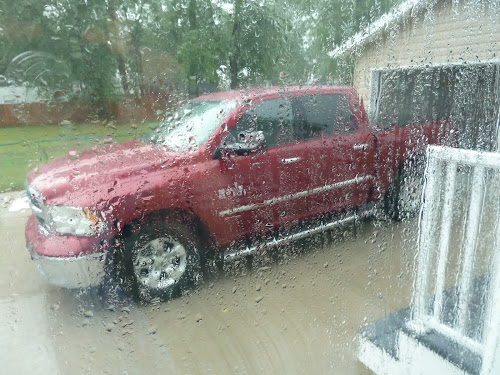 A couple of times we were blessed with a heavy rain shower that revived our dying grass somewhat. At one of those threatening thundershower days I mentioned to Benno that he shouldn’t have bothered to drive the truck into the garage when a dark and ominous looking cloud was about to disperse its contents, because he had said earlier that the truck needed to be washed. “Good idea” was all I heard while he ran outside wearing only his swimming trunks and t-shirt. My energetic husband then proceeded to wash the truck in the pouring rain! 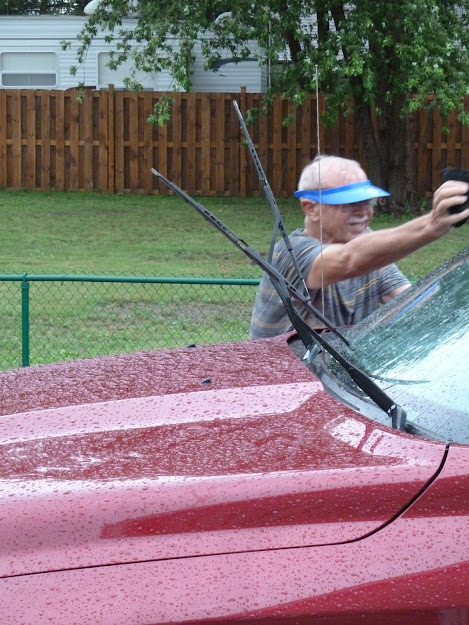 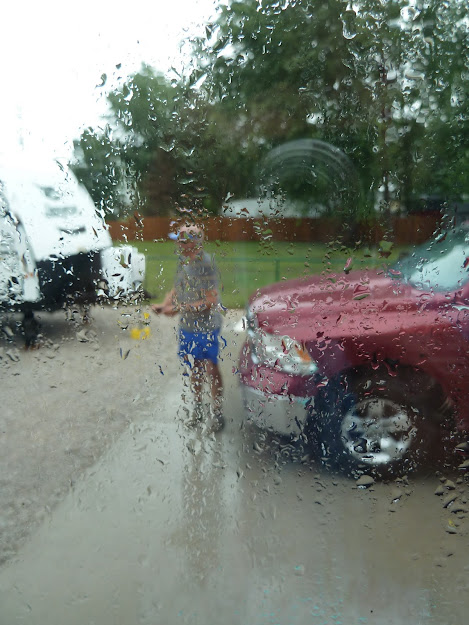 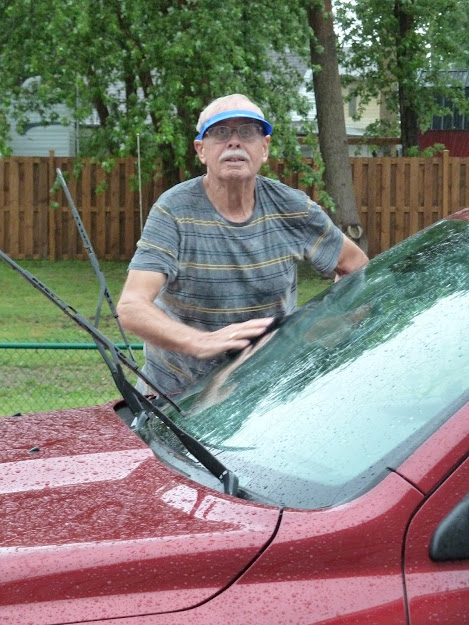 Contessa from 5Cs Que Pasa had asked me about the Cedar birdhouse Benno built and I took a close up photo for her. I tried to get a photo of the Chipping Sparrow as it flew in and out to feed the chicks, but he was too fast for me. As soon as she or he saw me, they would sit nearby with the morsels in their beaks waiting until I disappeared before flying into the birdhouse. 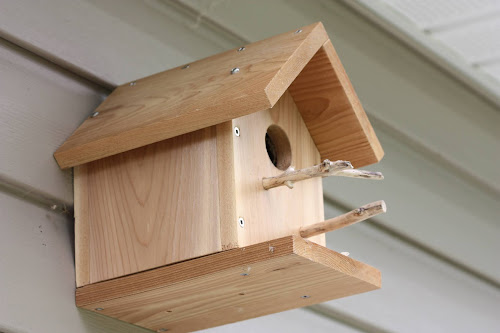 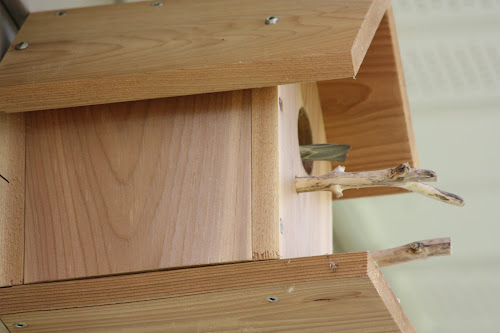 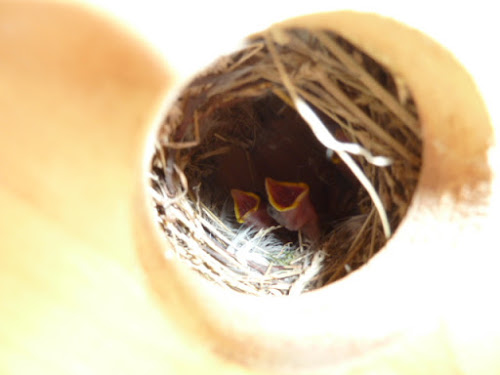 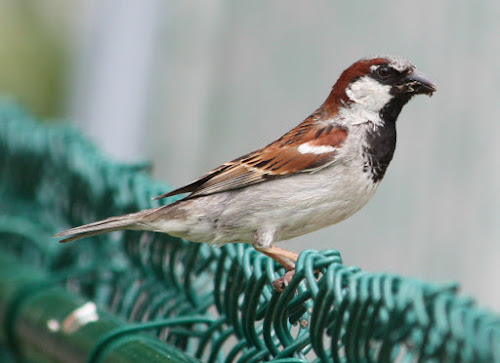 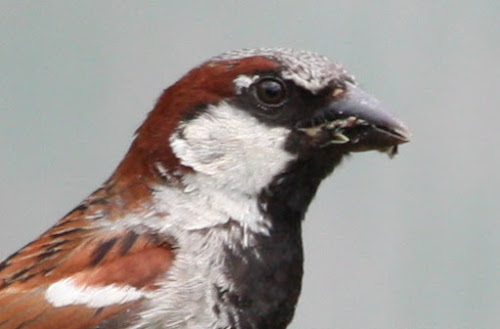 I had more success getting a snap shot of the Baltimore Orioles as they still come to the table to get their desserts of Concord Grape Jelly. I think maybe Dad was teaching the brood where to come to fetch it. 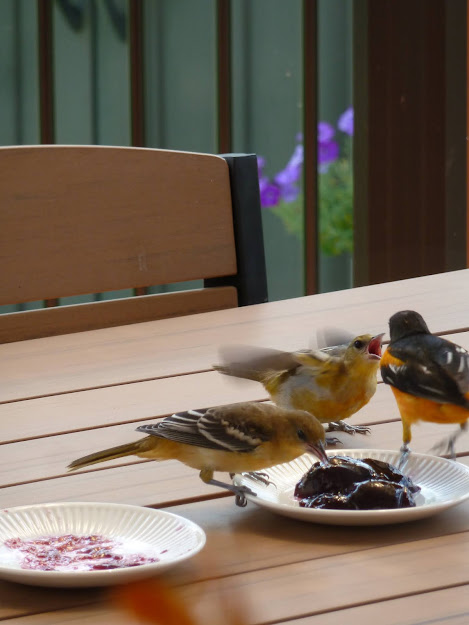 In my last post I mentioned being new to growing veggies and I thought I share with you what I found on both of my pepper plants last Friday. Jesus, I had not noticed these huge Tomato Hornworms before and I do check all my veggies twice a day when I water them and while I pick ripe zucchini, tomatoes and peppers. Strangely enough they suddenly appeared out of nowhere, and looking quite massive 3+ inches long, something you would not like to have in your salad bowl at dinner. Glad no harm was done to the plants or fruits. 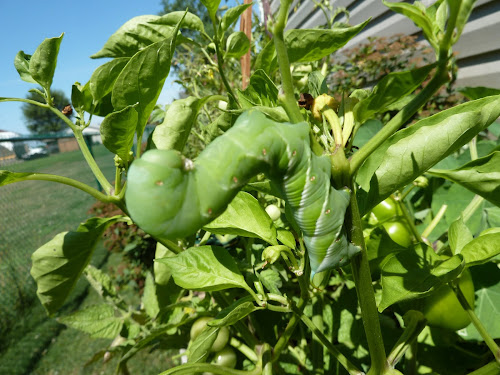 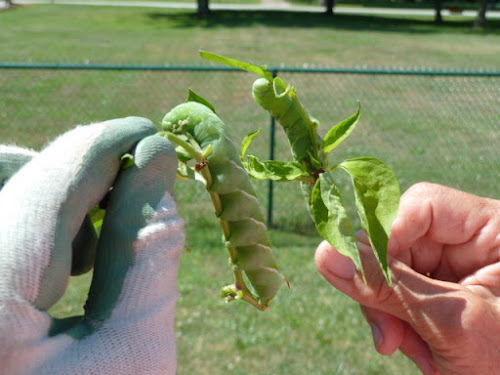 And while I’m at the subject of critters, have you ever noticed a grey grasshopper? I had to take a double take while I was walking on the grey gravel on our driveway and thought a gravel pit had moved on its own. Talk about good camouflage. 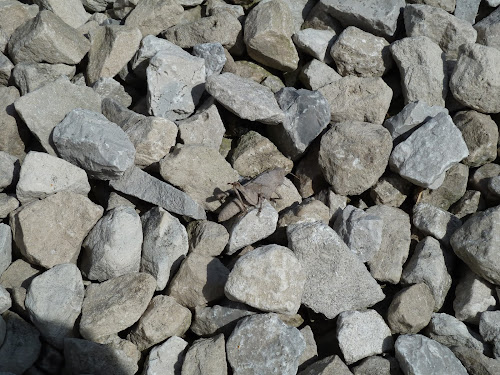 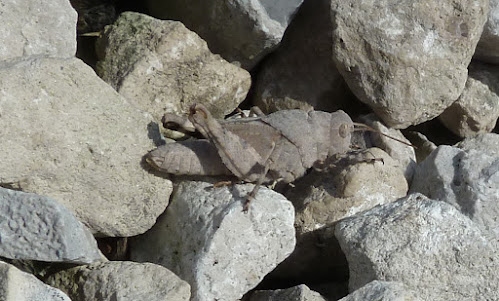 So what else was going on? Benno decided he wants to level the low spots on our properties himself. We have large puddles of water every spring and fall on our properties and last summer we hired a contractor to fill and level the low spots on the new land we had purchased. After paying him for his service we are still in no better position and the quality of fill was a disappointment.  It will require quite a lot of fill, in fact several tons of dirt (10 to 15 tons) and to spread that we need a machine. 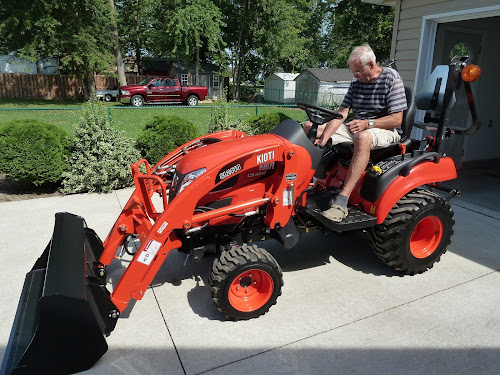 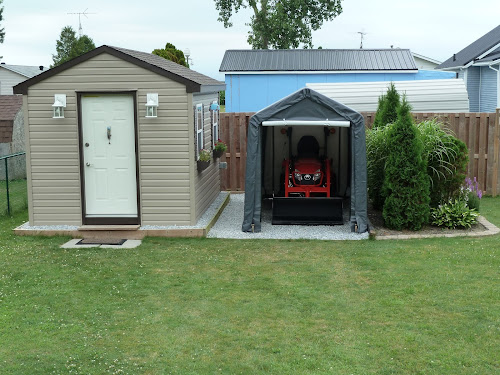 Here is the new addition to our fleet of toys, a little Kioti diesel tractor with a three-point hitch and a loader to level and move the dirt around. We are not getting lazy, but we are getting older too. On top of it, we put up a storage shed to house it and keep it from the elements. Hey, hold your horses, it could be put on the market again in a couple of years after everything is fixed on our land. 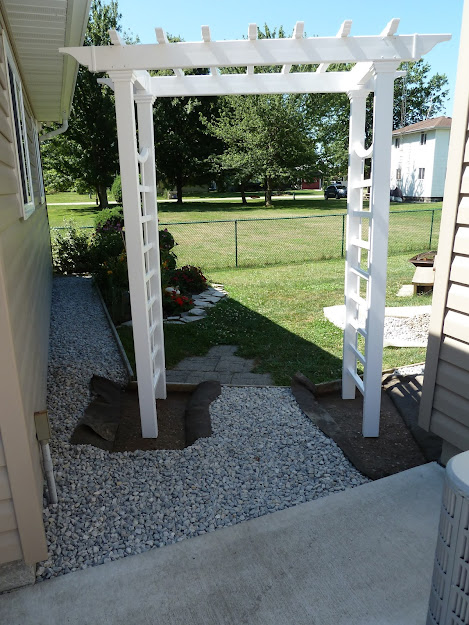 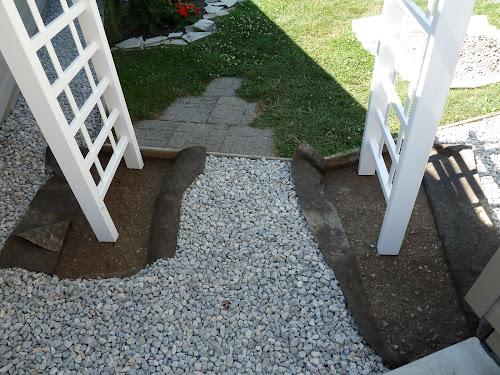 And while Benno is already busy enough I made him assemble an arbor for me that I am going to place between house and garage as an entrance to the garden. However, I have some digging to do so it can be anchored properly and not fall down in the wind. Stay tuned for the finished project as it also involves more digging and to relocate pavers etc.

Next update I hope you won’t have to wait so long for. Thanks for stopping by.

Summer at our house

Since our return from Florida this spring our RV has been parked outside our house. By the looks of things, and I mean the Corona Virus situation, it will probably be stationary there for quite some time before we think of traveling anywhere. So we have been homebound enjoying doing little projects around the house and garden.

Last year I had a lot more flowers planted but decided this year to try and grow a few vegetables like zucchini, peppers and tomatoes in addition to my usual herbs and radishes. It sounds easy but I have discovered that there are a whole lot of facts and knowledge to be learned in the process. 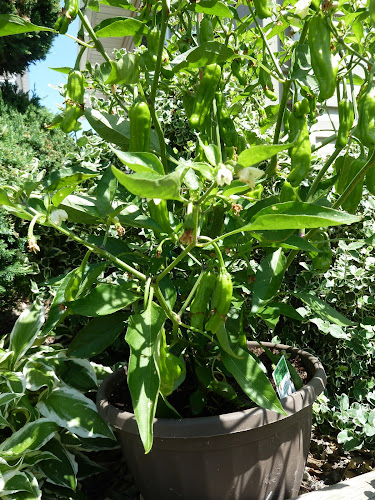 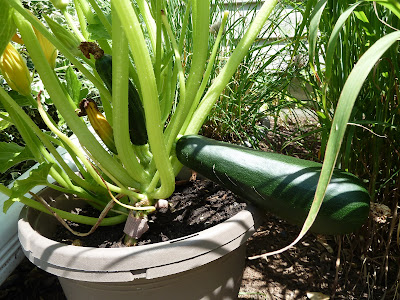 From an entire package of zucchini seeds only three seedlings made it into plants and it looks like only two of them are producing fruit. Every morning I inspect all the plants and while I was looking them over a red bug flew into the plant looking for a spot to land. I waved it off although it was pretty to look at. I had no idea what it was.  Curiosity got me checking at Google to find out what kind of bug I had seen. Well, shockingly I discovered it was a “Squash Vine Borer”. Actually it was a moth called the Clearwing Moth that lays a cluster of eggs on leaf stems or at the bottom of the main stem of the plant. A week after the eggs are placed, they hatch and these larvae are called the “Squash Vine Borer”, quickly bore into the stem of their host plant. The larvae will feed inside the tender plant tissues and will block water that flows along the stem, causing the plant to wilt and die. However, that is not the end of it. This little bugger will then exit the stem and burrow deep into the soil to pupate until next year to start this destructive undertaking all over again.

Upon that information, armed with several Band Aid strips, I hurried back out to inspect the plants to see if in my absence this creature had done any harm to my zucchini plants. Just in case I wrapped Band Aid strips around the stems as it was suggested on the Internet. 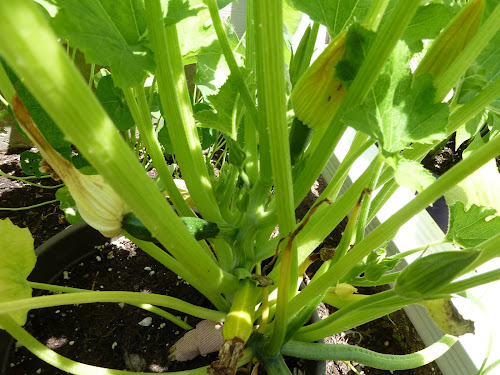 Of course there are so many more destructive bugs out there and secrets no one will tell you of how to and how often to water, what fertilizers to use, how to prune and on and on that will bring success and satisfaction to growing your own veggies. 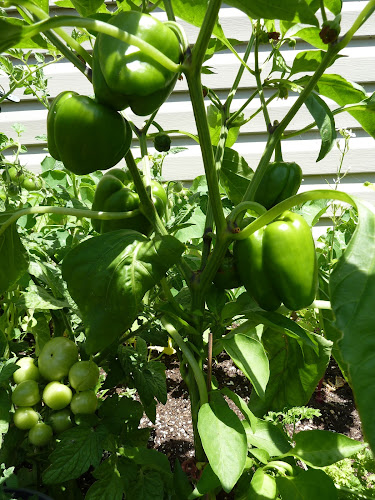 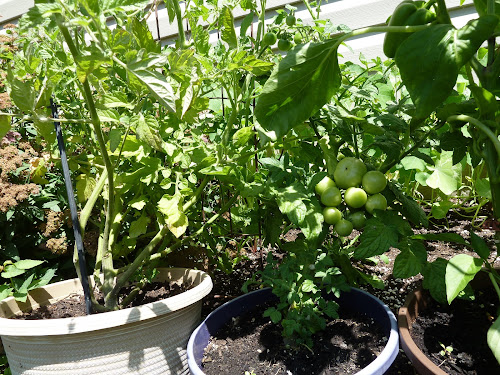 A few weeks ago Benno replaced a couple of his saws (emergency buys, while fixing up the house eight years ago) with newer models that have a few more functions, like soft start etc. than his old ones. I thought he should try them out right away and pointed out that we had some cedar planks laying around and they would be perfect to fabricate a little birdhouse. This he did, he built me a gorgeous birdhouse, he used stainless steel screws from our boating days so I can open it up and clean it when the occupants abandon it after the mating season. I really like it a lot and hope he will make another one perhaps with multiple units (bird condo, Haha!). By the way it was occupied within a couple of days and all our birdhouses are constantly in use even now during the summer.

Our local Internet provider, Wave Direct, had contacted us and asked if they could mount a repeater unit on our antenna mast, which sits on a tripod on top of our house. It seems we are the tallest point and free of obstruction in the area and the density of the trees in the area gave many people problems with their wifi reception which should now be somewhat improved.

Here in Ontario Canadian residents will not have to purchase a license to fish for a couple of weeks at the beginning of July and fishing is free for all. Several of our neighbors have yearly licenses and go out fishing every week or more. David, our next-door neighbor was out this morning for only three hours with his little boat and caught 18 Walleyes and a trout during that time. Sometimes we are gifted some fish and today he handed over a bag of freshly caught fish that he had already fileted for us. Thank you David Weil and we will eat it tonight. Coincidently, our grandkids were out fishing too but their catch was not as plentiful. I could save some fish and serve it when they come to visit. Here is the e-mail I got from my daughter-in-law: 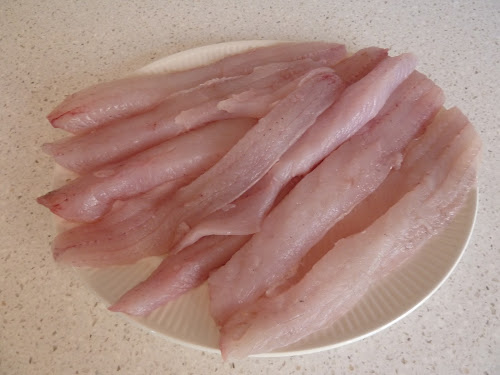 We took the kids out to a little spot by the water, as they all wanted to test out their new fishing gear. It was futile to try to explain that noontime, in full sun; during a heat alert was not prime fishing weather. Hans’ fishing rod came from Dollarama, but Daddy modified it by adding real fishing line and hook…the plastic rod and reel actually held up quite nicely.

After three hours in the blazing sun, Heidi ran some distance over to us, proudly holding out her fishing rod and excitedly exclaiming, “I caught a fish!” She then went on to say, “I dropped the rod, but luckily Annaliese saved the day and grabbed it, and she only fell in the water partly.”

(Annaliese is alright…and so is Hans…you must already know the 5-year-old boy fell in too).

Also, while out there we saw Heidi’s Stand Up Paddle Board instructor from last summer. She remembered Heidi and mentioned that Heidi’s picture is one of the pics on her website…Heidi had just turned 10 last summer…the youth program starts at 12! 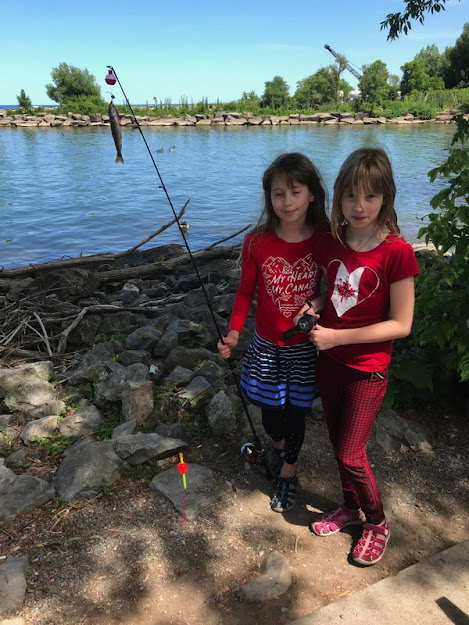 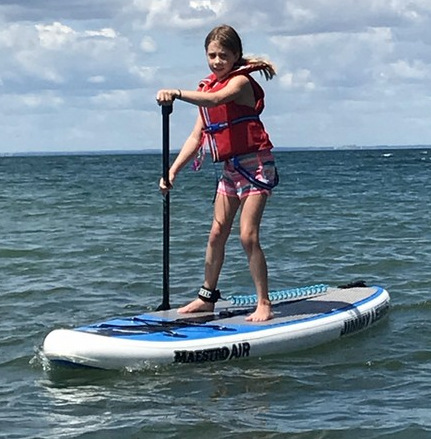 Hope you are all enjoying this great summer weather we are having and thank you for dropping in again.