On Thursday afternoon the plane I was traveling on from Toronto Pearson International Airport arrived a half hour later than scheduled at Windsor Airport. Benno and our two dachshunds had been patiently waiting for me to come out of the terminal and I could hardly wait to fall into Benno’s arms. Travel time had been 21 hours thus far and I was tired.

The days abroad seemed a lot longer for me than they actually were but that is because I had to accomplished a lot. My Mom has many health issues and being 91 years old she just cannot do the everyday things anymore we all take for granted. It is difficult for her to admit that she needs help. Professional help she did have but because of overcapacity at the various agencies that come into the private homes to provide personal care and housework, good help had been lacking to the point that changes had to be made. That is not only my assessment of the situation but everyone that saw what was happening, from neighbors to friends to family. 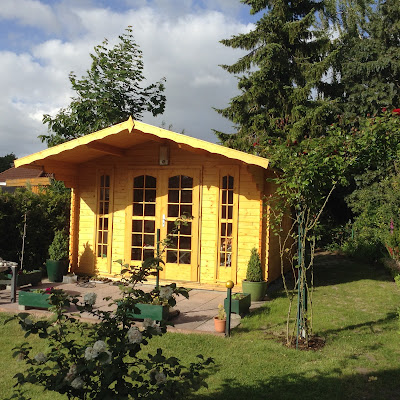 So the day I arrived, my Mom was in the hospital and I let myself into her house. I was shocked at the state her home was at. While I was still in my coat and putting my suitcase down, the phone rang. The “Stader Betreuungsdienste” a new Senior Citizens home not far from her house called to inform me that a room at their facility had become available. If we were still interested for Mom to move in, it had to be occupied within a week’s time. Talk about a sign from heaven! (My sister, Christina, had driven with Mom to various old age homes at her last visit to Germany and got Mom on several waiting lists, thanks god!)

To summarize this blog, Mom stayed at the hospital until move in day. My brother-in-law Harald, (Benno’s Brother), who lives 4 hours from Mom’s house, came to help me with the move of some of her furniture, the purchase of a new TV and phone and their hookup at her room. I had a pile of things to arrange, clean and prepare her closing and other personal items plus meanwhile spend every day several hours with Mom at either the hospital and then afterwards with her at her new home. Beside all this on the plate I prepared, cleaned and staged her house, found a real estate broker, accumulated all the necessary documents (a whole lot different than in North America) so the house could be listed for sale. There were a ton of other things that had to be done and by the end of my stay I think I had done all I could do to help the situation. However, Mom is not happy. The transition time for her to adjust will take a while, if ever. 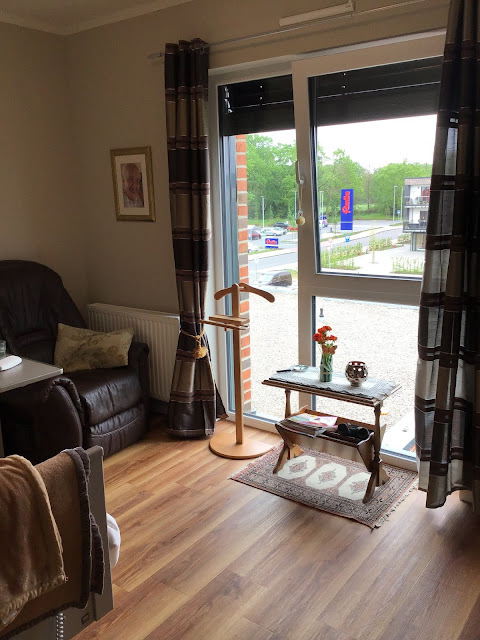 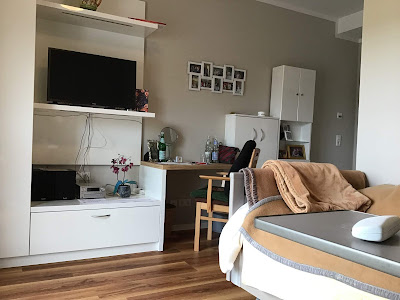 And then there is the other issue.
You might recall my March 28thupdate when we stopped in Goshen, Indiana at the Lippert Company, which supplied to Jayco our trailer’s frame and axles components. We had an axle problem and in Goshen the Lippert Axle plant took our trailer into the shop to replace our axles with a set of heavy-duty axles free of charge. While the trailer was in their shop, Benno and I were waiting in Lippert’s visitor lounge. There was a moment when I had asked Benno to go out to the truck to check up on the dogs. Both dachshunds where in the large carry kennel. Elsa was in heat, but she was wearing a female dog panty or diaper. It did not take long for Benno to come busting back into the visitor’s lounge out of breath with the bad news that Elsa was without her protective panty. I was out the armchair in record time running to the truck. Yep, her panty had been pulled off. Reggy the culprit looked at me with relieved eyes and Elsa’s expression was of total innocence. We kept watching Elsa and hoping that nothing had happened, but in the weeks to come we noticed that it had happened. I timed my return trip from Germany to be back with a week to spare before Elsa’s due date to give birth. This time getting puppies had not been in our plans at all. 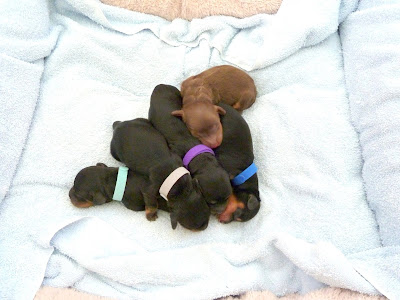 Being sleep deprived I was in bed at 9 p.m., 24 hours after getting up in Germany to fly back home on Thursday. At 3 O’clock on Friday morning I heard Elsa throwing up. It was way too early in the day for me to start cleaning her kennel so I took her to bed with us. An hour later she started panting and I thought I felt her having a contraction. Suffering from jetlag, my body told me to get up anyway and Benno had been wide-awake too. He was a good trooper and offered to make breakfast, so we had breakfast at 4:30 in the morning, would you believe it. Elsa was not due to give birth until next week, but I suspect the excitement of me coming home may have triggered her beginning of giving birth. 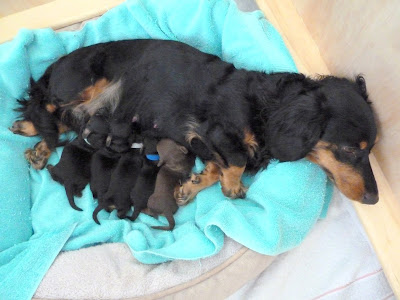 The whelping box had been setup in our guestroom already just in case. I fetched a pile of towels and made Elsa comfortable in her birthing bed. She is a brave girl and a good mommy. Over the course of 4 hours Elsa birthed 5 healthy puppies. My good neighbor and friend Teresa came over as well to assist if needed. Thank you Teresa. 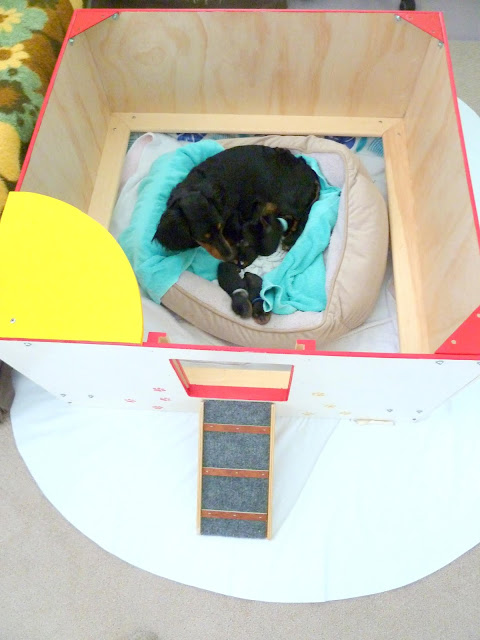 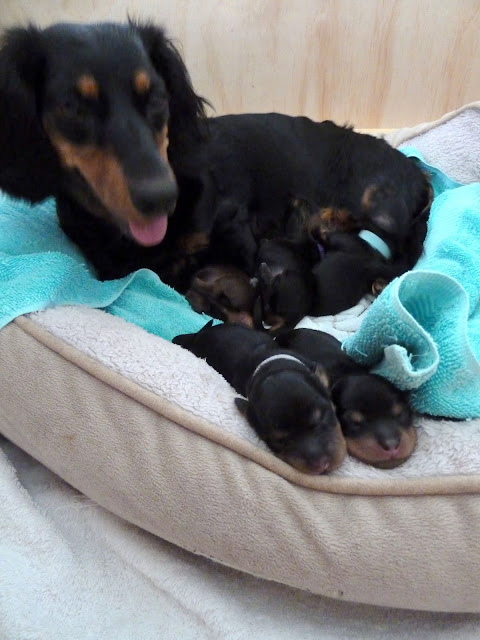 For a while I will not be able to sleep though the nights as Elsa needs to go outside several times a night and also eat additional meals to help her milk production.
I’ll be posting the development of the little bunch of pups and happenings here at home in a few days. Stay tuned.

Hi everyone! Thanks for not giving up on my blog writing. I know you must be wondering if there is nothing to write about in my life. There is plenty, but all I can say at this point is that my Mom is not doing so good coping by herself in Germany. My sister went to see her in April but only three weeks after her return to Canada there seems to be another crisis with Mom.  So I am flying out tomorrow to see what I can accomplish. 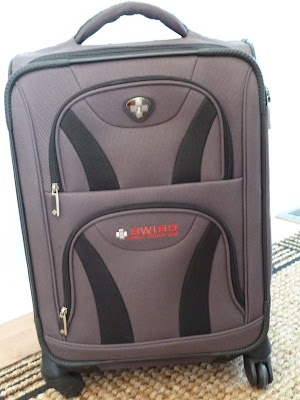 In the meantime Benno has been very busy with projects around the house.  I had said to him that it would be great if I had an electrical outlet in my shed.  When we assembled it several years ago it didn’t seem necessary to have power in there. After all we have an electrical outlet just about everywhere outside the house, outside and inside the garage, outside and inside Benno’s shed and a full hookup for the camper. This spring Benno thought he would do me the favor and grant me my wish. It never even occurred to me to take pictures of the trench he dug from my garden shed to underneath the deck where the conduit with cable runs to disappear underneath the house into the crawlspace where the cable is connected. Inside my garden shed the conduit comes up neatly at the wall and the outlet is just above the table. It is wonderful that I can now plug in the weed trimmer batteries to charge and to use my new toy, the rock tumbler, in the shed as well. Thanks to my hubby I got it now. 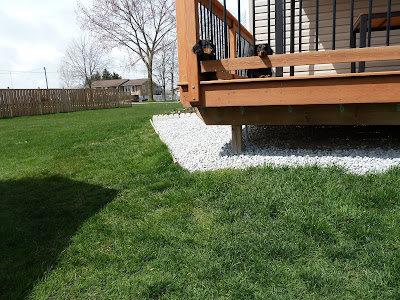 You can hardly see where the conduit is buried as the grass is nicely growing on top of it. I did help with the dirty earthwork, yep, but the rest is Benno’s doing. 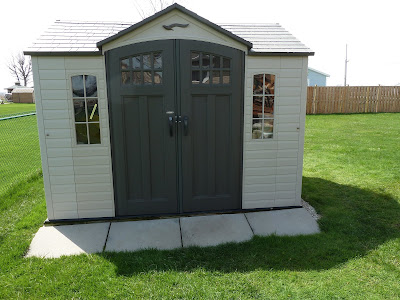 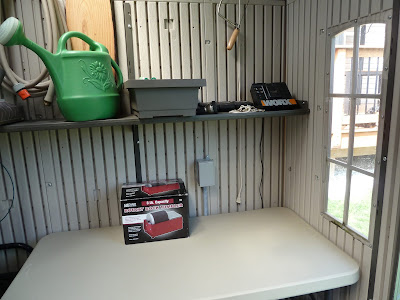 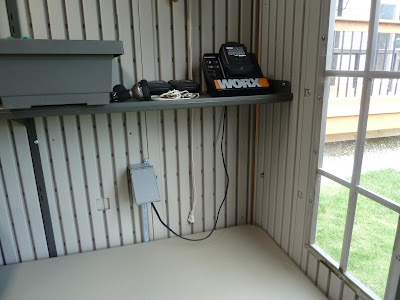 Another item on our to do list that got pushed off again and again were the front steps into our house. When we rebuilt, i.e. fixed up the house and the area in front was redone with a concrete pad, there was a gap up to the door that needed a proper step. We temporarily put concrete blocks with a wooden board on top to help the situation and then went on to other things. Over time we got so used to this temporary fix, that we just ignored it. 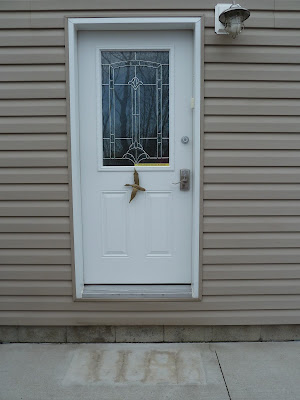 I think Benno outdid himself with this project. Look at this beauty of an entrance step. It is so solid and heavy built with the best materials including composite Trex Decking and aluminum powder coated railing, which will last hopefully for many years to come. 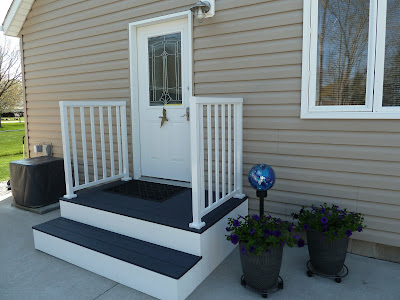 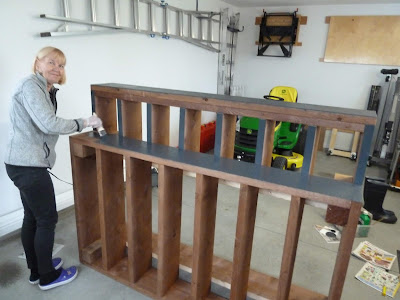 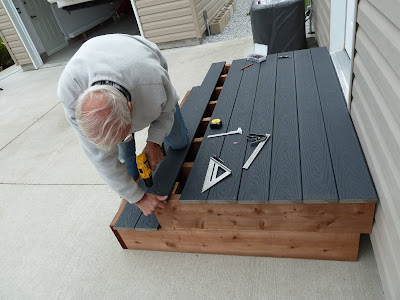 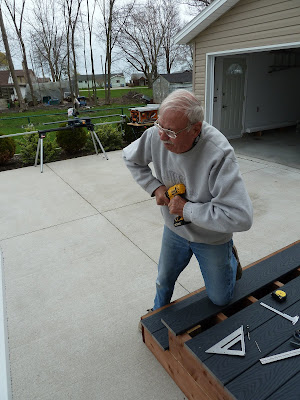 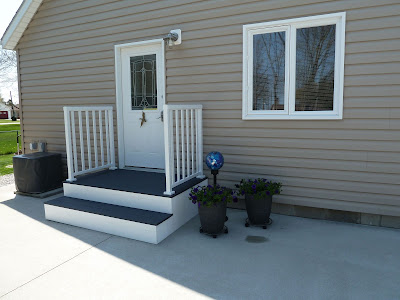 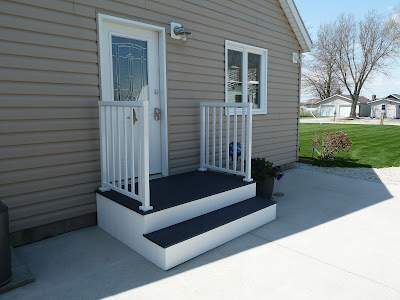 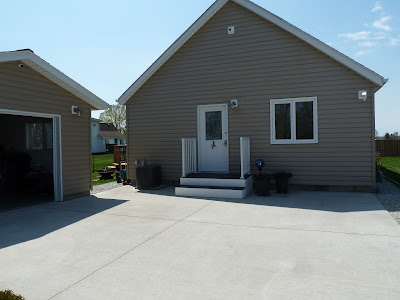 It looks like the weather has finally turned for the better and although the ground is still pretty saturated from all that rain we have had, the sunshine is trying its best to dry out the ground and today I gave it a try by cutting a good section of the grass with my lawn tractor.  Lets hope for many warm and dry days this spring and summer.

I’ll be in Germany close to the Hanseatic City of Stade for the next little while and hope to have better news when I come back. My garden has to wait for my return and maybe the flowers in the garden centers will be all on sale by then. If I can I will pop into the blogs from time to time, otherwise I have to catch up later.

Thanks everyone for checking in. Please do so again, I appreciate it.