When one thing leads to another

Everyone must be thinking we are lazing around down here in the sunshine doing nothing. That is partially true for me as we had three consecutive days last week of nice weather that allowed me to sit outside reading my book, but I had to keep my jacket on, as I felt cold without it. Meanwhile Benno was into a new project that kept him busy.

You see it all started with a new gadget.  Some years ago back on the boat “Diesel Duck”, Benno bought me a Kindle Fire for Christmas so I could read the books of my choice while we were traveling in foreign countries where book exchanges were very meager. Later on at another Christmas he surprised me with an iPad, which basically replaced the Kindle Fire since it also supports the same Apps and I handed down the Kindle to Benno who discarded his Sony Reader in favour for the Kindle Fire, which he really liked. Recently a new generation of Kindle Fire came out with an 8” display, lighter, thinner and more versatile that really appealed to Benno.  He is an avid reader who sometimes goes through several books a week, so I thought he deserves his very own Kindle. 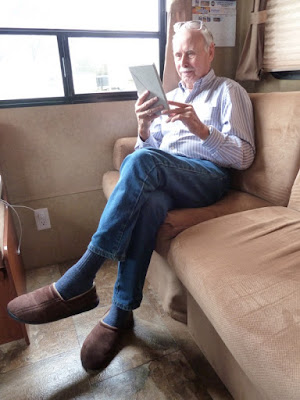 Now we are certainly oversupplied with Internet dependent devices and you need a good Wi-Fi signal to operate them.  At home it is no problem, but when we are underway or in an RV park, it is a different matter.  If the park has not enough repeaters to distribute the signal or, if there are tall rigs parked next to you blocking the signal or, perhaps you are parked somewhere where a free Wi-Fi is available but you are too far away to receive it, then you get nothing. Our travel trailer is made out of aluminum, which prohibits any signal to go through unless we sit by the windows with our devices.  In order to rectify this problem we ordered a Wi-Fi booster antenna to install on the roof of the camper, but more about this subject in one of my next blogs, which Benno will mostly write, because he did the installation. 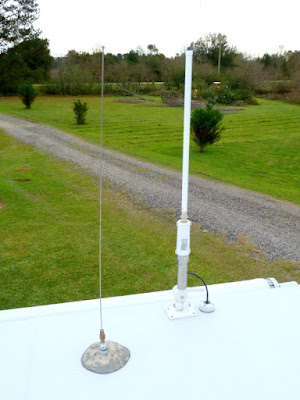 So now we were faced with not only the installation of this new antenna, but also how to raise the antenna to its upright position on the roof and how to lay it back down when travelling?  At home we have several ladders but we didn’t want to take one with us and don’t want to have another item stored in the locker of the trailer.  And that brings us to the next thing, the installation of a permanent ladder on the backside of the trailer, purchased from a local Camping World store.  Which brings us to taking trips to local hardware stores, buying the right screws and tools we didn’t bring with us. Somehow Benno didn’t seem to be too dismayed about that. 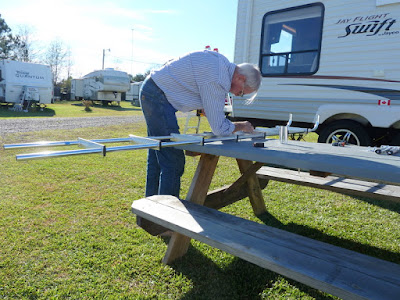 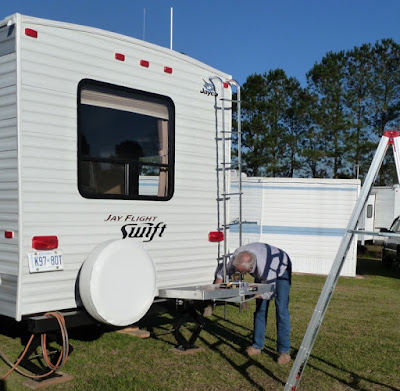 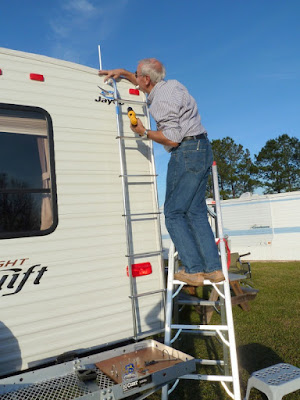 As usual, my husband does great work when it comes to technical things. The ladder is mounted; I’ve been up there to test it out. The antenna with mount is installed and now it is time to see if we can get it to work.  The moral of all of this is, don’t start anything or it leads to something else. 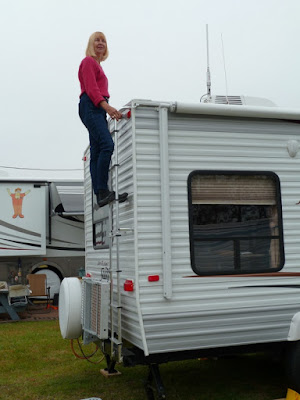 Posted by Marlene Klopfer at 16:37

Email ThisBlogThis!Share to TwitterShare to FacebookShare to Pinterest
Labels: When one thing leads to another