At 5 A.M. the whelping process began…

On Monday the 21st Elsa (female dachshund) didn’t eat her breakfast.  Reggy (male dachshund) would have gobbled it up in addition to his own portion, but I took it away from him. He has a pretty good appetite and I don’t want an overweight little doggy. Benno offered each dog a slice of Kielbasa sausage, which they both happily accepted.  Half an hour later Elsa brought her snack back up.
It was a gorgeous day with temps at 30C and hardly any wind.  Most of of the day I spent outside sitting under the gazebo on the deck reading while both dogs stayed with me. Occasionally I went inside accompanied by both dogs as they usually do.  It was the day we had the partial eclipse, which started here in our region at about 2:20 in the afternoon.  While I don’t have the proper glasses to watch this event, I dared and put two dark lenses from my set of Polaroid sunglasses together and had a peek through them.  Yes, the moon was partially obscuring the sun and I felt a slight drop in temperature as well I noticed a more curtained sunlight.  Later on I cooked up a batch of skinless chicken legs with the backs attached. Once cooked I removed the bones and cut the meat in small chunks, then portioned it to be put into the freezer for another weeks’ supply of dog food.

When it was feeding time I handfed Elsa some chicken morsels but she didn’t have any appetite. However, she licked the plate clean of the chicken broth that I gave her.

At 5 a.m. today (Tuesday morning) I woke up hearing Elsa panting.  Reggy was restless too, rummaging around in his crate. Both dogs had to go out to do their business.  After eating our breakfast I warmed up the uneaten portions of the dogs food. Reggy didn’t waste any time chomping down Elsa’s Monday breakfast and Elsa ate all of her leftover dinner.  OK, so far so good. 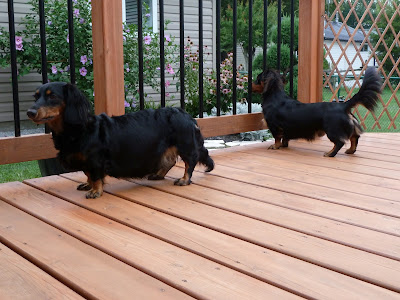 As the morning progressed, Elsa displayed an increased unrest. She constantly changed her positions and berths.  Sometimes she would sit with me on the couch, then go to the day bed only to wander around the house a few minutes later to the crates or jump onto the sofa in the guest room. Sporadically she panted. Moments later I found her buried under the big cushion on the couch, and then she would sit in her crate.  At short intervals she needed to go outside and right back inside.  We ate an early lunch of Dr. Oetker's Hawaiian pizza (because its quick and easy), meanwhile keeping an eye on Elsa.  She now definitely suffered from contractions, moaning every so often. Reggy traipsed around her, sniffing her behind but kept quiet.  I tried to comfort her, stroking her head and belly, but she was restless.

Benno left to make a quick run to the Rona building center (owned by Lowes) to get electrical supplies (Romex, device boxes, duplex outlets etc.) for his future shed.  (I presume he looked for an excuse to get away for a little bit.)  Elsa kept moving around and then settled in her night crate/kennel.  Reggy and I sat with her. All of a sudden she jumped up, yelped and a sac containing a puppy fell from her.  It was exactly 1 o’clock in the afternoon and I was all by myself. Having read so many websites I tried to stay cool, grabbed Elsa including puppy and blanket and took them to the whelping box.  There I helped to clean up the pup, cut the umbilical cord and disposed of the afterbirth. Elsa kept licking the little pup, a boy, and I watched.  The little guy felt cold after a while from being licked so much so I wrapped him in a small towel and held him in my hands.  An hour went by and nothing happened. Then Benno came home and found me holding the first pup.  I guess men are a bit helpless when it comes to babies or in this case puppies. I sensed that I would not get all the help I might need from my hubby, so I called Teresa, my friend and neighbor.  She came right over and I handed the little bundle over to her to hold and warm him.  Meanwhile Elsa was restless and she started to pant again. An hour and a half after giving birth to her first puppy she delivered another boy. This one was heavier and seemed a bit larger, too.  For the next half hour we were busy assisting Elsa in cleaning her second pup and looking after her wellbeing.  Around three o’clock a little girl pup was born, then another girl. This forth puppy looks a little bit different with a brown coat and white nails, while all the others are black with tan spots above their eyes. 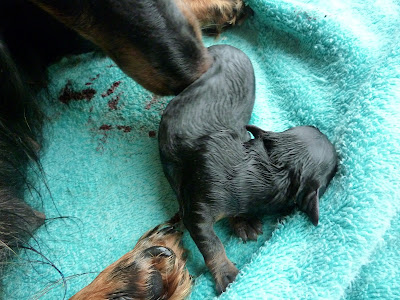 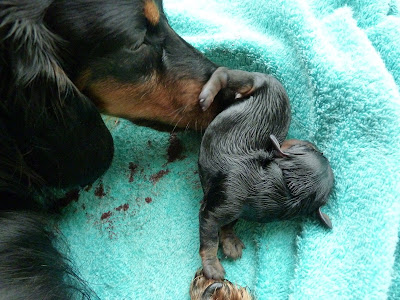 We tried to attach the little ones to Elsa’s nipples, but she wouldn’t let us.  I looked for the phone number of our Pet Valu Store in town to see if they sold any milk for our puppies. They did and Teresa offered to make a run into town to get it.  While I was speaking on the phone and telling the sales lady the milk was for 4 puppies, Teresa yelled there comes another one.  I cut my phone call short saying I’d be by and dropped the phone to help. This one was another boy.  Benno went outside to speak to Dave, Teresa’s husband, and when he came back inside a few minutes after, I proclaimed that the sixth puppy, another boy had just been born. This one was smaller than its brothers and sisters, so it’s the runt, but not by much. 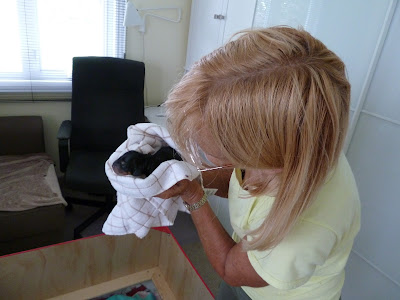 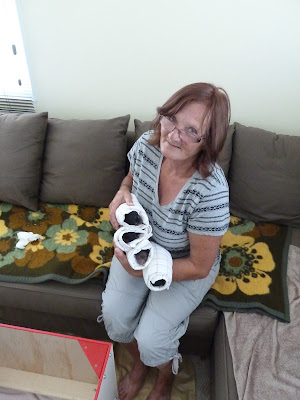 Teresa did drive uptown to get the powdered milk and a couple of bottles to feed our pups. It so happened that as soon as she left the sky opened up and we had a hefty downpour but Teresa is a good trooper and it didn’t faze her.  Thank you so much, Teresa. You were a big, big help! 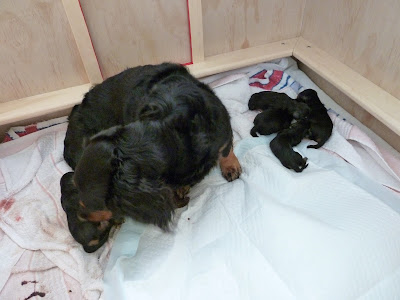 All is well at the moment in the whelping box. Elsa is resting and the little ones are nursing or sleeping.  I am prepared to keep watch and assist with the additional milk we bought to keep the pups well fed. 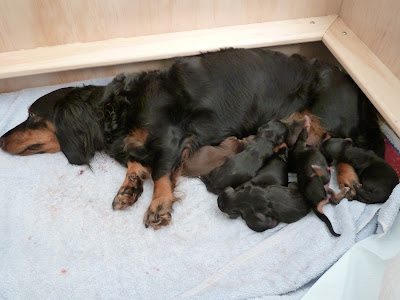 Posted by Marlene Klopfer at 20:26