We live where the Tomatoes grow 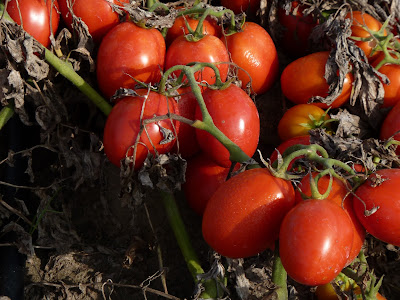 In the spring of 2012, while we were still cruising on our Diesel Duck boat, we flew up from Miami Florida to Leamington, Ontario to purchase our house. Through research on the Internet Benno found this property for sale and we were intrigued to see it. The post you can read on the Diesel Duck blog under "I think we will eat lots of tomatoes this year" Back then, before Warren Buffett took over and pulled the plug on the well known Heinz Tomato factory, Leamington was known as the “Tomato Capital of Canada”.  Since then, the Heinz factory was bought by Highbury Canco who now produces the paste for “French’s Tomato Ketchup” here in Leamington where the mild climate and fertile clay soil are ideal for growing tomatoes. However, Highbury Canco is not the only factory processing these delicious tomatoes in town. There are other large vegetable processing factories in the area. 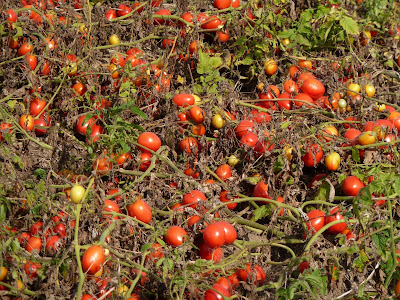 If you ever wondered how the spaghetti sauce is made or about the canned chopped or whole tomatoes in the can are being produced, and what the hundreds of fields of ripened tomatoes look like, I have a little info for you. Derik, one of the sons of the  owner of "Weil's Food Processing Plant" here in Wheatley/Leamington, happens to be our neighbor. Last year at this time at the height of the tomato processing, when the facility runs 24/7, we were invited to a tour at their plant.
First hand we got to see the whole process from the time the tomatoes were delivered to their plant to the finished product in cans ready to be picked up. 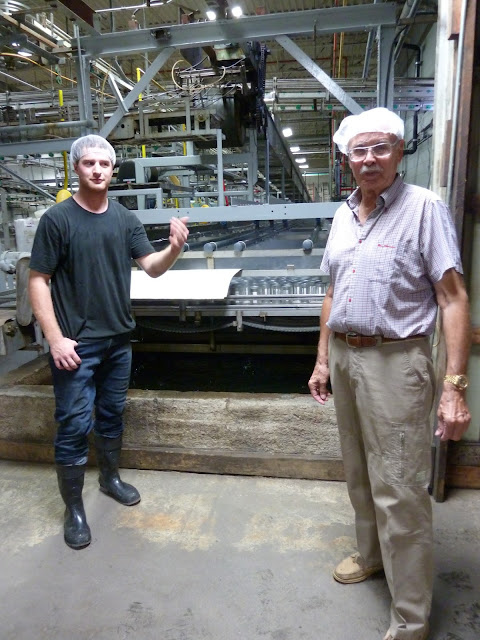 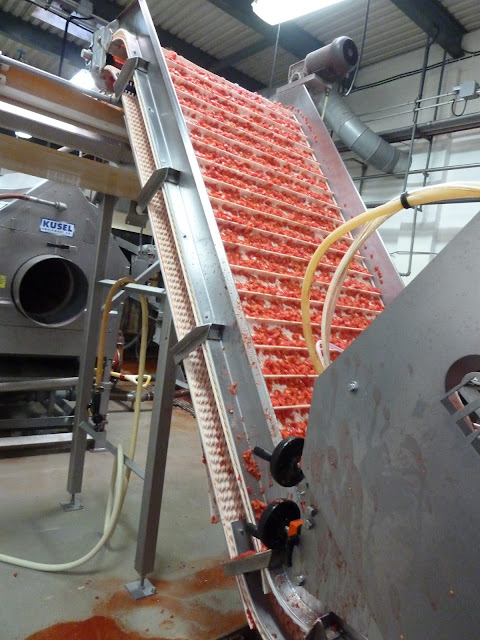 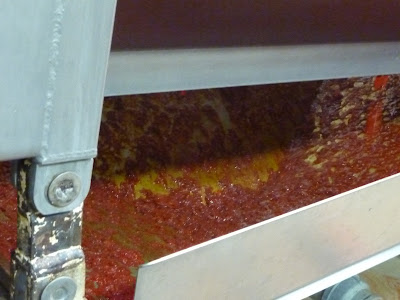 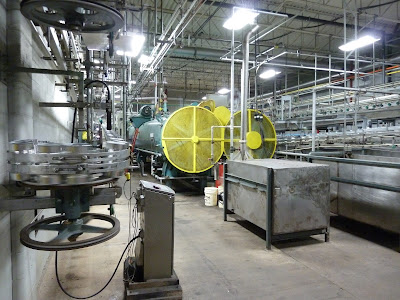 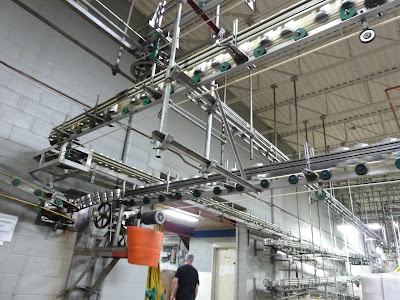 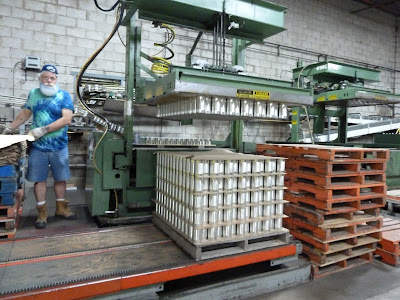 There are probably a variety of harvesting machines out there, but the process of harvesting and producing the canned tomatoes, paste, juice and spaghetti sauces everywhere is very similar. For all of you out there interested in this, there is a little youtube video showing the process from picking to the finished process. It is better viewed than me trying to describe it here in detail.

While driving past the many fields of ripening tomatoes here in our area, we see the harvesting machinery in action. It is optimal when all the tomatoes in the field ripen at once on the clusters. The harvesting machine drives along the rows of tomatoes as it lifts the whole plant from the field and shakes it, so the tomatoes fall off without the stems.  Photo cell's and infrared controlled electronics, which separate red, green and not ripe tomato, guide the red tomato onto the conveyor belt.
The green and not yet ripe tomato, plus the stem and the leaves are being discarded and ploughed under by the harvesting machine. Any foul tomatoes are being quickly sorted out in the harvesting machine by hand from a small crew of 4 to 6 women, (men are too slow in picking, I was told. Yep!) and the good tomatoes are being transported by conveyor belt into a trailer, which is being towed alongside the driving harvester. The operator, a Mennonite, said that he owns 2000 acres and that his whole family and other Mennonite crews are involved in the harvesting process. 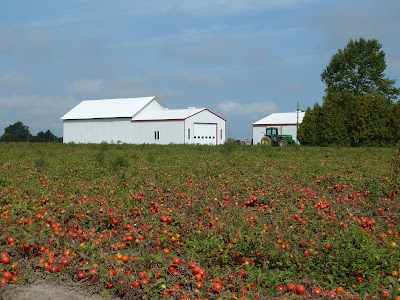 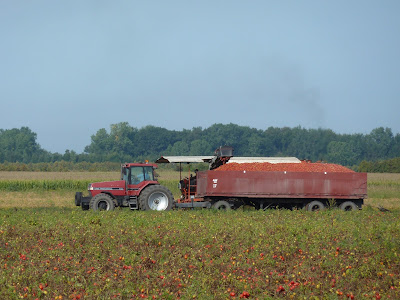 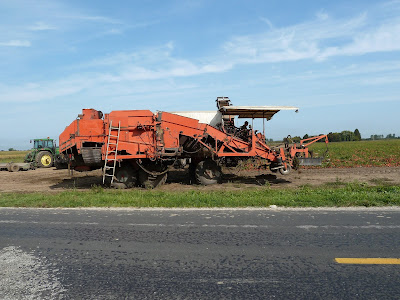 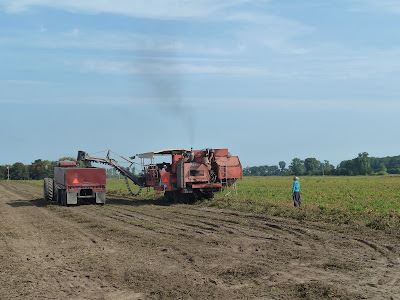 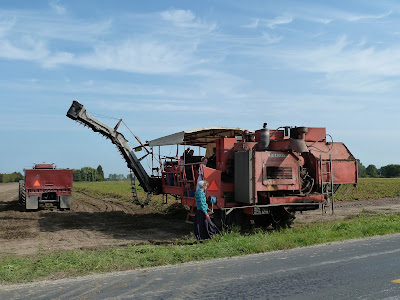 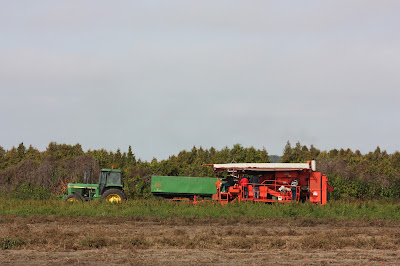 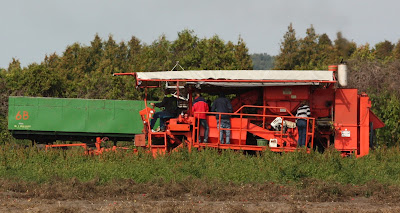 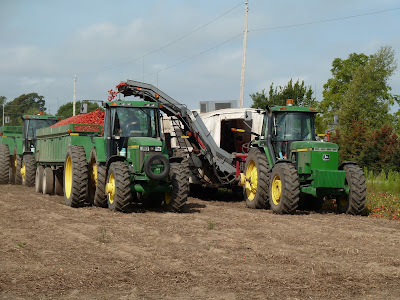 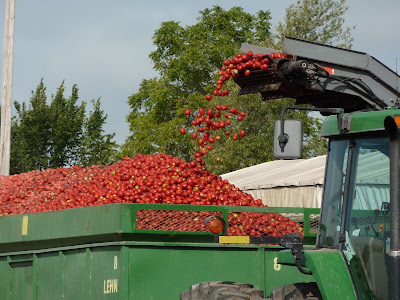 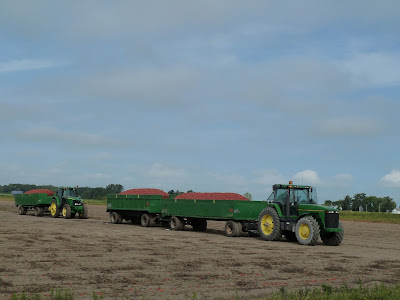 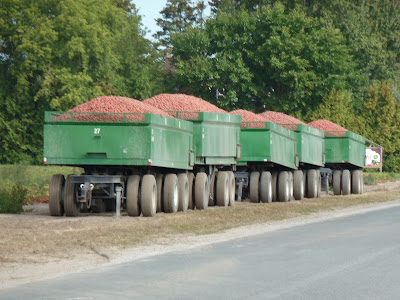 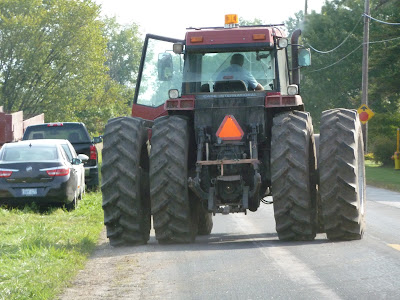 And these, my friends, are the forerunners of todays modern machinery!
Seen at the Mennonite's property 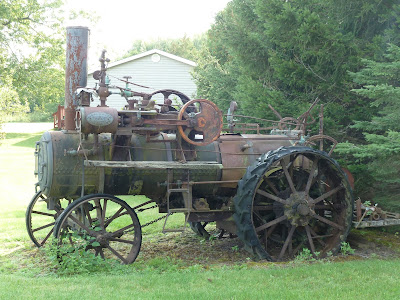 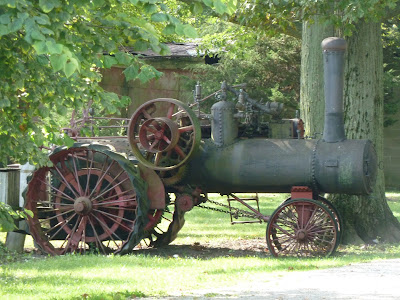 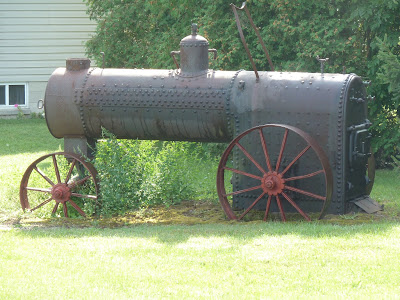 Posted by Marlene Klopfer at 17:22