We are home, but still living in the travel trailer!

As per our plan, we left the Wandering Oaks RV Resort last Friday morning, the 1stof April. Packing up took a bit longer because it had rained the night before and hoses and pads were muddied up. Benno took his time to clean everything up before stowing the whole kit and caboodle in the chaps.

Heading north on I-75 we sighted throughout the day at least a 100 RVs of all kinds leaving the state and migrating north. The traffic was heavy at times that had us crawl along at 30mph, but no accidents, it was just congestion. We never really know ahead of time where we will spend the night when traveling, as there are too many variables that could quash your plans. Years ago the Walmart parking lots were open to overnight parking, but many do not allow that anymore. Also some of the Lowe’s, Home Depot and Bass Pro Shops have discontinued that courtesy. Truck stops don’t appeal to us either, because the big trucks come and go at any hours and run their engines or APUs (Auxiliary Power Unit) for the reefers, which could wake up the dead if they are pulling up right next to you.

So on Friday evening I started searching to see where we could spend the night as we were approaching Atlanta. A few years back we stayed at the Camping World of Macon, located in Byron, GA. When we drove up, their large property was full of new RVs as well with a spillover of new RVs in the adjacent fields. When I inquired, I was told that they unfortunately had no space at all for us. Next, we checked out the Walmart and Lowe’s In McDonough, GA but they had signs up of the towing companies that would tow any vehicles parked there overnight. I might add that pulling a travel trailer makes you think twice before you drive into a parking lot or road to make sure you can turn around if you have to. Benno walked up to the parking lot of a Cracker Barrel Restaurant that was next to the Lowe’s to see if they had any parking available for us, because they do let their dinner guests’ park there overnight. Benno came back to the truck to report that they had one large spot left for a bus or RV. So we hurried up and drove around the corner and just as we approached the parking lot, a 5thwheel pickup truck took that parking slot right in front of us, Christ!


Well, back to square one, or rather the I-75. In my trusted book “Along the I-75” I found another Cracker Barrel in Morrow, Georgia, just 15 miles further north on I-75 off exit 233, where we got lucky and found a spot. The designated parking lot was jam-packed full of RVs and commercial trucks. Well, I did not have to cook dinner, we were eating out. Hurrah! 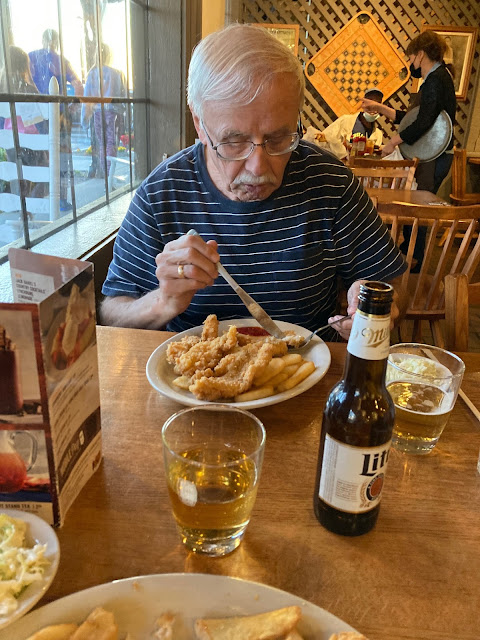 Saturday was another nice weather day and the I-75 was not too bad but of course there were delays also where we sat in traffic without moving. When it came to the issue of where to park for the night we drove to the Camping World and RV dealership in Georgetown, Kentucky, also adjacent to the I-75, exit 126. We got there at 5:30 p.m. just before they close at 6 p.m. We were assigned a parking spot right next to the service department, which would close shop at 7 p.m. and not open on Sunday. As a member of the “Good Sam Club” that entitles you to discounts to the merchandise, we also get to park for free at most Camping World locations and as a bonus they provided us with courtesy shore power. That was wonderful because the temperature dropped down to 5C/41F during the night and we were able to use our electric heater to keep us warm.

Somehow we both woke up early on Sunday and after breakfast and cleanup got underway at 7 a.m. An hour later we passed by the Cabela Outdoor/Sporting shop where we had thought to try for an overnight location. I doubt it would have worked out as they now also discourage overnight parking. Since we were so early underway we thought to make a stop at the IKEA of Cincinnati store along the I-75, exit 19 in Ohio and visit their displays and marketplace. They weren’t open for another hour so we had a snack while we waited for the doors to open.

We got our IKEA Store fix and hit the now busy I-75 Sunday traffic. There were several fuel fill up stops and breaks during the day until we got to the Canadian border at the Detroit, Ambassador Bridge crossing early evening. Wow, what a traffic jam! Hardly any cars or trucks seemed to move through the inspection booths for a long time. When it was finally our turn, surprisingly we were processed very quickly and sent on our way with a “Have a nice drive!” Just so you know, it is now mandatory to fill out the “”ArriveCAN” online App before crossing into Canada and it has to be done not before 72 hours of crossing. It requires scanning of your passports, downloading or picture taking of all your Covid vaccination certificates including all dates and answering other questions. I was wondering if every traveller had done so while we were waiting for our border crossing.

So, we came home last night expecting a warm toasty house to greet us, since we had changed the “Nest” thermostat setting from the low 9C/48F to 22C/71F via Internet access (also free wifi at Camping World Georgetown in Kentucky) on Sunday morning. However, it was very cool in the house and the furnace would not respond to any setting.

Thank goodness we have a full hook-up next to our house where we are parked on the concrete driveway. The truck is in the garage and the house is heated with one little electric heater, but we spent the night still in the travel trailer and that is where we are right now, warm and cozy while its raining outside at 5C/41F, waiting for the furnace technician to come and find out what the problem is.

I hope to have better news on my next blog. Thanks for dropping by again.

Posted by Marlene Klopfer at 17:12