How to save money and time while cooking dinner

Just recently I (Marlene) read a blog about Instant Pot – An Electric Multi-Use Pressure Cooker That’s Perfect For RVers. That post was well written and informative and I sure hope that it will encourage many readers to give cooking in a pressure cooker a consideration.

But that got me thinking that I wanted to write about my own experience with pressure cookers. You see you don’t have to add another small appliance with preprogrammed menu items to your galley in order to whip up a delicious meal in no time at all. It can be done on the stovetop.  Pressure cookers are not a new invention. In fact, the first one was created in 1679.  However, they have been perfected through the years and all professional chefs use them too.

Pressure cookers for stovetops can be used with propane, gas, electric or induction.  So if no electricity is available, or to save on hydro costs, this pressure cooker is another option to use in the RV or at home.  In fact, it is ideal for a RV and I will tell you why.

I use a stainless steel 6 quart "Fissler Vitavit Royal" and a stainless steel 5 quart "WMF"  pressure cooker. Both were manufactured in Europe and are of excellent quality. They can be used as a regular pot on the stove, but to reduce the cooking time considerably, you put the lid on and bring it to pressure. Then reduce the heat source and start timing.

Not only are cooking times reduced dramatically, energy is conserved as you are cooking on a very low setting for a very short time. Only a minimum of liquid is required to build steam inside the cooker so vitamins and minerals are not seeping away in a pot of water.

As an example: after searing (browning) a pot roast on all sides, adding water and closing the lid, it will be done, totally tender, in 20 - 25 minutes and you get gravy also. Cooking stewing beef after the browning process will take only 15 minutes and the texture and taste is as if it was simmered for a couple of hours. Peeled potatoes are done in 5 minutes.  If you leave them in for 7 minutes, oops – you’ll be making mashed potatoes. Vegetables take even less time. I could go on and on…

Now tell me why would you have a pot of potatoes boiling away on the stove for 20 minutes, steaming up the kitchen and using more energy/fuel if you could do it in 5 minutes on a lower heat setting without creating any condensation?
Once you start using a pressure cooker you will not reject the thought of making something that usually takes a long time to cock or bake in the oven because you are short on time.

For me, I could not imagine ever giving up cooking in a pressure cooker because I have been doing it for more than 35 years. (As a side note, both of my pressure cookers I used onboard our vessels and the savings on propane costs were huge)  Of course not everything is cooked this way, but once you own a pressure cooker, you’ll experiment with more and more foods to prepare in the pressure cooker. You do not have to learn to cook all over but you’ll be amazed at the wonderful outcome.

So if you are still not convinced and have heard horror stories of exploding pressure cooker pots with food particles all over the kitchen, the big aluminum ones which look like a miniature 'A-bomb' and when they blow off they take out your kitchen, those were the [First Generation] “old type” of pressure cookers that have a weight-modified or “jiggly” valve, which releases pressure during operation. The newer types, which I own, those operate with a spring-loaded valve on top of the lid with a rising indicator with two markings to show the pressure level. They do not release any steam during operation.  As a safety precaution on both of my pressure cookers they release steam when the heat source is not reduced enough at the time the pot has reached the required cooking pressure. But they still would never explode nor can they be opened unless all steam has escaped and the lids have been twisted to the opening position.  Totally safe!

Checking out the types of pressure cookers on the Internet will give you a good idea that the market has considerably grown in this area and all kinds of manufacturers have jumped in. In my personal opinion, a cheap tool is a cheap tool and will not give you as much satisfaction than a quality product.  But before you purchase one of these fine pots, read the reviews available online, though be mindful that some reviews are in fact ads from the manufacturers. One trusted source would be from “Good Housekeeping” here is the link to the test and this is the link to the reviews.  While reading up on the new models available, I noticed that the quoted times to reach full pressure are much longer than my pressure pots require, which usually only take a few minutes on a high setting.

Now come on fellas, don’t say to your spouse: “Don’t you have enough pots already?” because you don’t have enough tools, or do you? 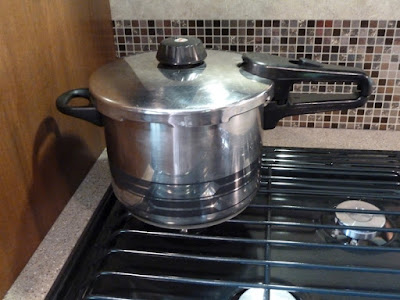 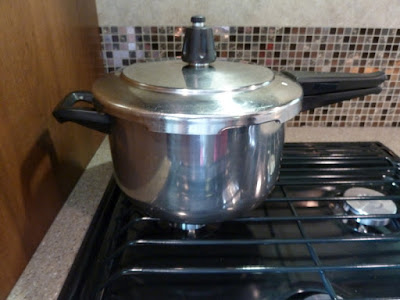 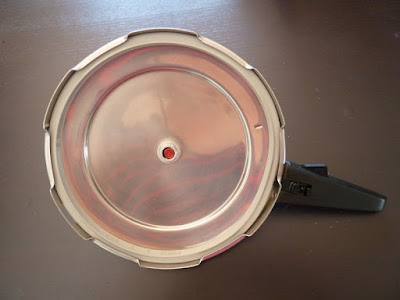 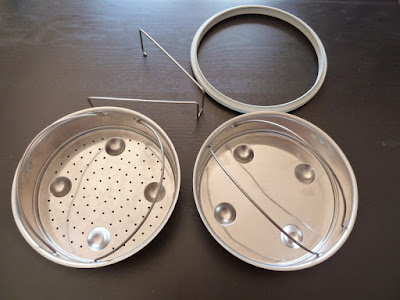 Posted by Marlene Klopfer at 19:45