Correction on the stinkbug we found

Thanks to our loyal reader and friend Rudi Halbrichter from Toronto, who is a world travelled nature expert, I have to make a correction.  He pointed out that the assumed stinkbug we discovered sitting under our awning was in fact quite an aggressive and dangerous little bugger called (Arilus cristatus) or commonly called a Wheel Bug. 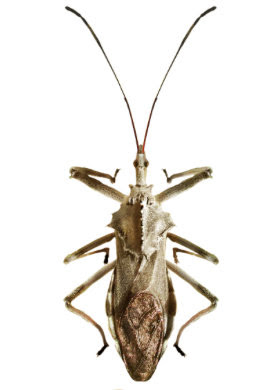 Checking the Internet I found several websites and the "Featured Creatures" site, which I include, gave me a lot of information.  The Wheel Bug belongs to a mean family of bugs called kissing bugs, assassin bugs, vampire bugs etc., reaching lengths of up to 1.5 inches, which was about the size of the specimen we found. It preys on pest insects and in fact attacks the brown marmorated stinkbug we thought we had captured. They are feeding at night and are attracted by light, hence since we found it on the LED strip below the awning. Its bite, when inflicted, can be more severe than a bee, wasp, or hornet sting. No wonder, as the number of teeth vary from 8 to 12. (Really?) Wheel bug saliva contains a toxic, paralytic substance that immobilizes and kills the prey insect within 15 to 30 seconds of injection.
It goes without saying that this bug should be avoided or handled with caution. 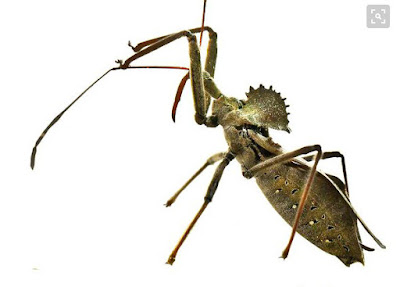 However, Wikipedia states that Wheel bugs are highly regarded by organic gardeners because they consume a variety of insects and their presence indicates a healthy, pesticide-fee ecosystem.

So there you have it.  Hopefully I wont come across another one. Yuck!

Posted by Marlene Klopfer at 13:12