This update is mostly about dropping the diesel engine into the boat!

The days just seem to fly by for us but that is probably because we are always busy. So before I dive into Benno’s hobby project I’d like to mention that we had a very special visitor this month. Victor, our long time friend from Toronto came for a visit. We met way back when we were berthed with our sailboats at the same dock in the Port Credit Marina many years ago. He chose to come by Via-Rail into Windsor, which unfortunately took over 5 hours travel time as the train went into a snail pace for a stretch of the trip.  He stayed at the Best Western Hotel in Windsor and said that the view over the Detroit River was fantastic. There is a lot to see in Windsor, Leamington and the surrounding area. His time here was way too short to show him all that there is to see but we hope he got a good glimpse of our lives here in the country. Of course we talked a lot and I totally forgot to take photos, but I borrowed one of him on his sailboat from an email. I hope he doesn’t mind. He took us out for lunch here in Leamington and we hope to meet again sometime soon. 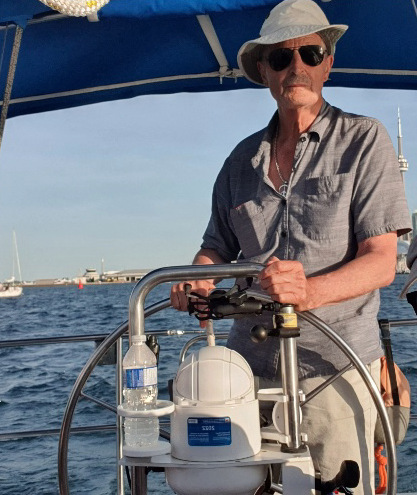 So, there has been some progress on the boat. The engine got worked on and parts were removed in Benno’s shop, like air filter and gear box so it would fit through the boat door and has less weight. We tested that it could be lifted just halfway outside the shop door by the backhoe by rolling it onto the entrance step while it was securely mounted with threated studs to the wooden shipping box resting on the moving dolly. With flexible mounts attached it would have been too wide to fit through the boat door. 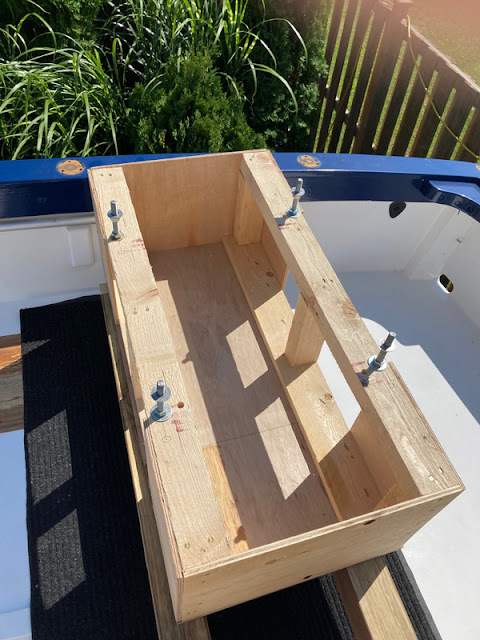 Jim from Ciliska Excavating came again with his loader backhoe to do the lift. We must be special customers, because he spared an hour for us even though his business is very busy at this time of year. The lifting of the engine and moving it into the boat is exactly a reversal of the November 6 last year update. Jim had no problem picking up the engine by the door and lifting it easily and expertly with the sling already attached and moved a few feet over to the boat where he set the engine onto the rail platform that Benno had built to take out the old engine.  Benno had even removed the aft railings of the boat so the lift would not have to be as high. After Jim had left, we simply pulled the engine on the track through the doorway with muscle power and the come-along  (the boat door was taken out) I guess we had less than an 1/8 inch to spare on both sides. Once the engine was above the engine compartment it was easy to bring the engine into position and to lower it down with a hoist. However, all the taken off parts were reassembled beforehand. 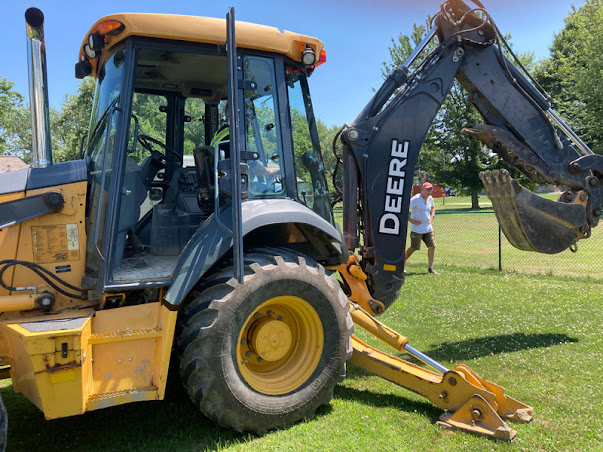 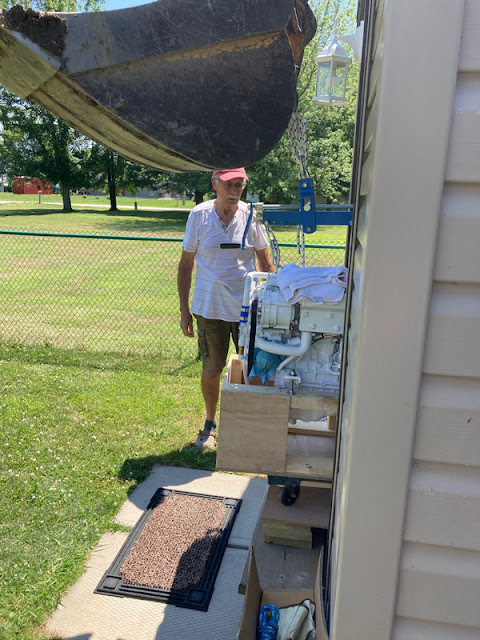 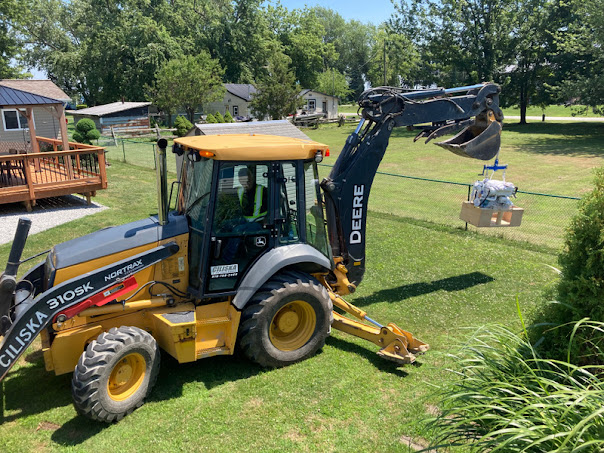 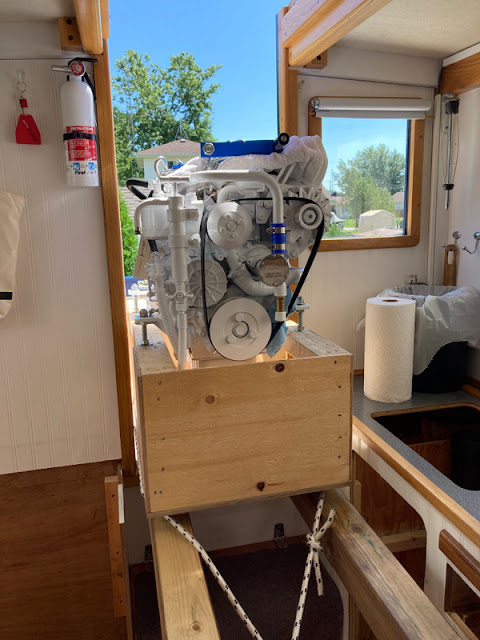 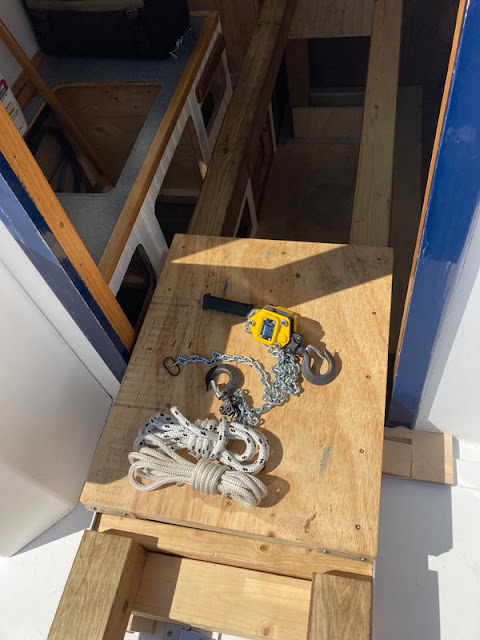 The engine will have to be lifted up again once we get the sound insulation for the engine compartment. 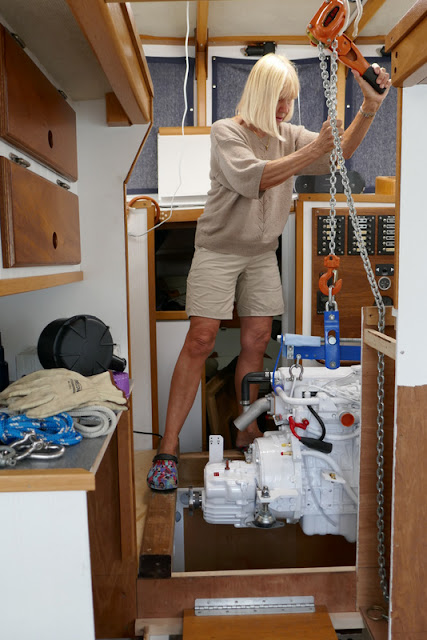 Because we changed from a dry exhaust (chimney on the rooftop) to a wet exhaust system, which is extremely quiet, there had to be another hole cut for the exhaust outlet. 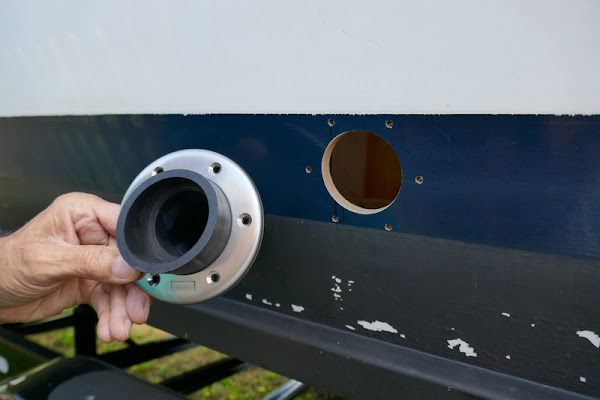 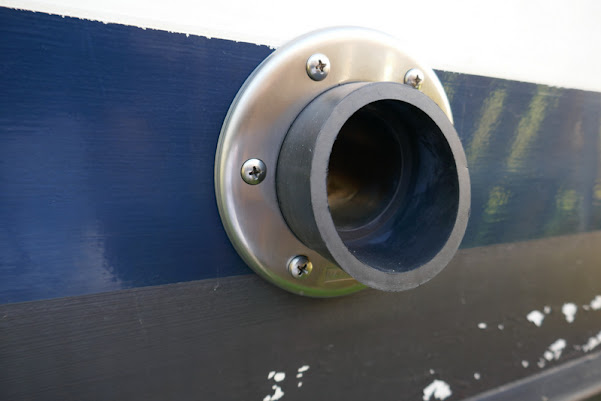 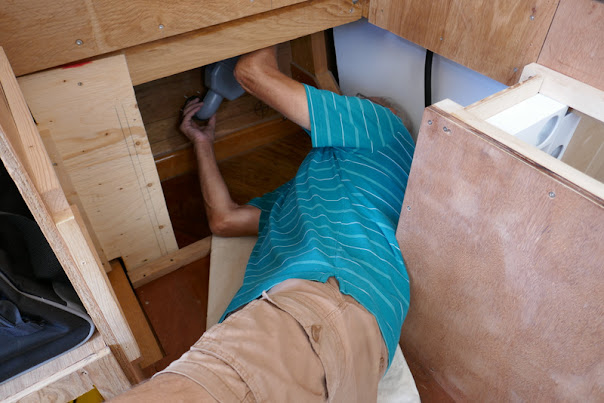 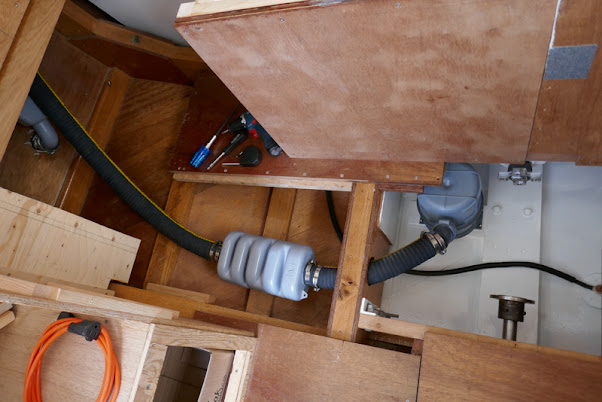 For a while there were a lot of deliveries here at our house since we don’t have local marine stores that carry what we need. This boat, just like our “Diesel Duck” is going to have a fuel polishing system. That means that if the fuel that is taken on is dirty or somehow got condensate water in it, it will be cleaned before going into the engine. 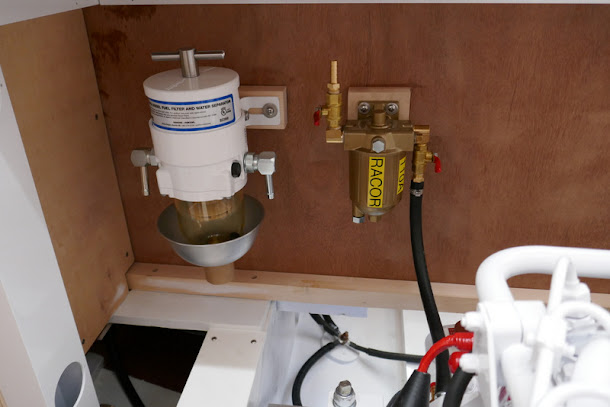 On the photos you can see the polishing unit’s large Racor fuel and water separator temporarily mounted and next to it the extra engine fuel filter with a hose attached.

Of course there were other projects involved as well as some more painting where I gave my time and hand. Building, renovating, or overhauling a boat takes time and money so it is a slow process for us. This hobby project will be a while yet. 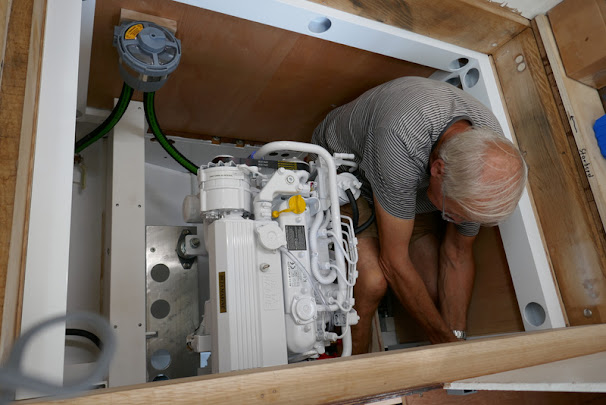 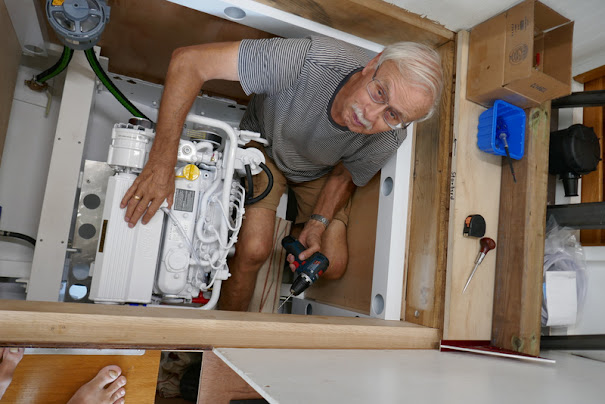 After we had the engine in the boat, there was no more use of the rail system we had built and it was disassembled and cut up for disposal. One of the offcuts I snagged up and made another garden art. Benno drilled the hole on the bottom for the metal rod to plant the 4x4” post. Then he helped with a couple of screws on top to hold the recycled part from the old gazebo and metal bird from an old birdbath. 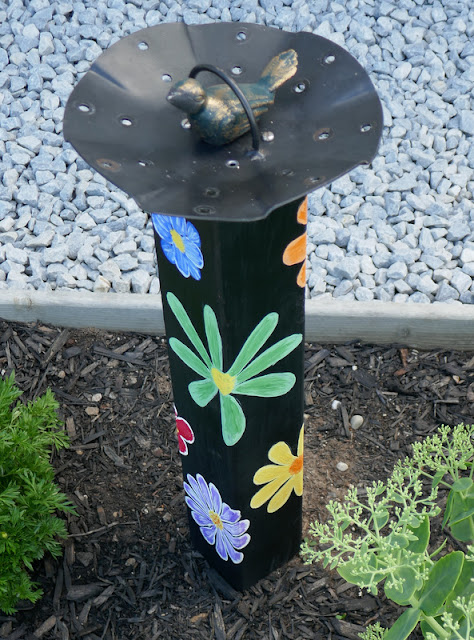 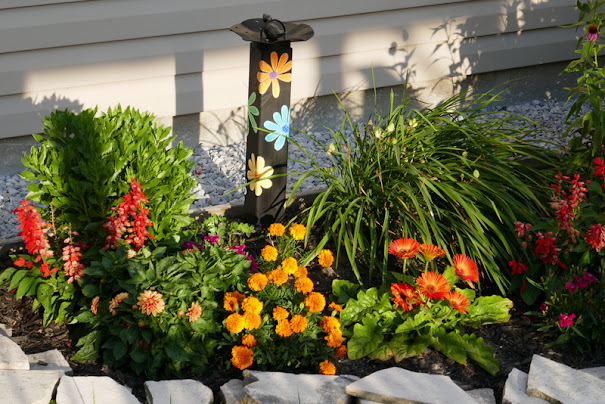 One day we had a bit of a rainstorm passing through and this photo I took the next day as the system had moved on.  I enjoy my outdoor activities even though it is a bit of work and the veggie plants produce bountiful so I am happy about that. 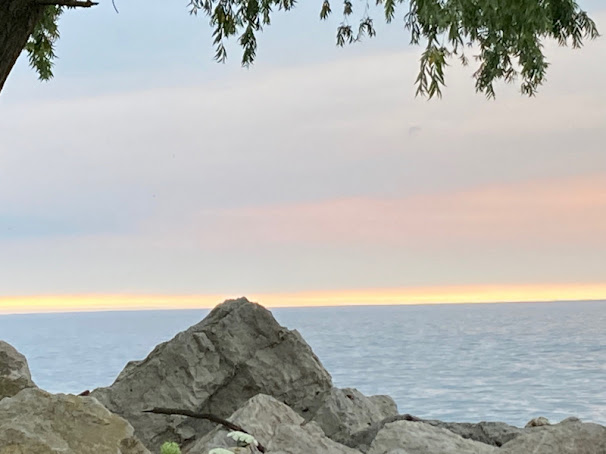 Thanks for dropping by again and I hope everyone enjoys the summer as much as I do.

Posted by Marlene Klopfer at 19:31