“I could have kissed the ground” this phrase would be very familiar with our boating friends and it crossed my mind when we arrived at our RV site in Robertsdale, Alabama on Monday night.  The weather had been severe in many parts of the country this past week and we had our share of torrential downpours for hours on end while coming down from Canada, which made the driving very intense. Benno displayed nerves of steel while I was beside myself with fear watching helplessly as rain gushed down with such an intensity as if aimed from a fire hose, which reduced our visibility to about a car length in front of us, all the while we were crawling along at 40 mph on the highway while pulling our travel trailer.

We left Canada last Saturday in dry weather. A friendly officer swift and effortlessly conducted our border crossing and since we had nothing to declare a few minutes later we were on our way.  On the agenda were filling up the truck with fuel including our spare jerry cans. That chore didn’t take long.
Next, we needed to stock up on food items that were restricted to import to the USA from Canada at the border plus some things from the Aldi supermarket that are not available in Canada. There is a fairly new Camping World store at the Sportsman Drive in Toledo/Rossford, Ohio very close to the I-75 on Exit 193.  It is right in the middle of a shopping mecca with all the stores you could or would want and within view of a Pro Bass store the size of a football field or bigger. Kroger, Meijers, Aldi, Super Walmart, Home Depot, Lowes, etc. and tons of restaurants, including Cracker Barrel, you name it, you got it.

After picking up an item for the camper, the parking lot of the Camping World store became our rest spot for the night among other smart parked RVs folks.  After the stores closed down the streets quieted down and the night was peaceful. However, in the morning it started to rain but not too bad. Later on the rain stopped and the driving was good.
Because the Epic Rainstorm (the media called it that) was in the forecast, we had decided to take the I-75 south until Chattanooga, Tennessee and not the I-71 past Cincinnati toward our southern gateway the I-65.  At exit #19 right next to the I-75 past Dayton, Ohio is a large Ikea store where we pulled in to have lunch at their cafeteria and to stretch our legs while walking through the showrooms. We’ve been to that particular Ikea store before and could not resist purchasing a thing or two every time.  This Sunday was no exception. Refreshed and happy with our new gadget our trek south continued with some rain, heavy at times. Towards nightfall we looked for options to park with our camper for the night but two of the possibilities we didn’t like at all and hated that we had wasted precious time looking.  The idea to spend a night at a Walmart parking lot had never appealed to us, but as it got darker and in desperation, I found a Super Walmart at exit 29 in Corbin, Kentucky in my guide.  The parking lot was sloped toward the store so we drove around until we found a level spot next to a grassy area.  To our surprise the ground was totally dry and it didn’t look like it had rained here at all.  That was a bonus because we were able to set up our portable generator outside to charge the batteries, use the 120V appliances and I started to make dinner. Then, all of a sudden, all hell broke loose.  A very long freight train, hooting at ear splitting noise, roared by right next to the grassy field.   Oh boy!  After dinner we relocated to a more central spot on the parking lot next to a lamppost but there were more freight trains running during the night followed by roaring mufflers on souped up pickup trucks of the Kentucky Mountain Boys driving by and at 05.00 a.m. a street sweeper noisily circling our camper cleaning the parking lot and the law in a sheriff patrol car passed by the fifths time.  Needless to say we were on the road by 6 a.m. and soon got into the rain again, which would worsen the further we drove. Basically the moment we hit I-65 south the rain came down in biblical proportions, the road conditions turned into a nightmare and stayed that way until we left the I-65 a few miles before Mobile Alabama. Towing the camper felt like controlling Noah’s Ark. I thank God; we made it without incident and didn’t end up in the ditches or down the ravine like so many other cars we saw underway.

As we came off I-65 into the Gulf Shores Parkway the rain lessened and just before the I-10 it stopped altogether.  The RV Park was dry at our arrival and the temperature was in the 80ies F.  Just lovely. On Tuesday the sun was out, we were sitting outside having our coffees and hoping the weather will not disappoint us in the coming weeks. We are now at the Central Time zone, 1 hour behind Ontario Canada and 7 hours behind Germany. 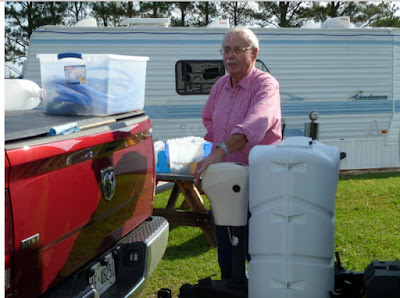 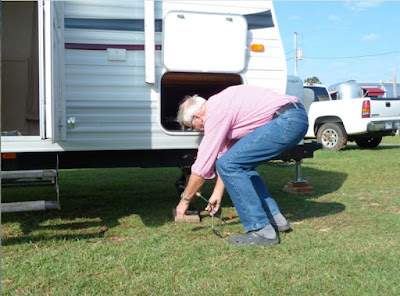 
And a happy, healthy and prosperous New Year to everyone!
Posted by Marlene Klopfer at 20:24