So, what did we forget to pack?

Exactly a week ago, on Monday morning, Benno casually said to me, “We are leaving on Thursday morning.” “What? I thought we are going to leave around Christmas time. I am not ready. I wouldn’t have bought the yoghurts and fruit and we can’t eat all the ground beef we still have in the freezer,” was my retort.  Well, this wasn’t the first time my hubby would spring a decision like this onto me. Usually it happened when a cold front threatened while we were still boating. I just have to adapt.  Of course the reason behind our hasty departure from Canada was the sudden weather forecast of a big Polar Vortex coming our way with icy temperatures, snow, freezing rain and just awful driving conditions affecting not just Ontario, Canada but also Michigan, Ohio and many other states.

So for the next two days I went into overdrive and started packing, washing and ironing, schlepping pile after pile of clothing, kitchen stuff and other things into the travel trailer and stowing everything in the closets, cupboards and drawers in a manner that would make sense so we would find them later on. This is not so easy when you do it for the first time in a new trailer and some items I only put in a temporary spot while we were on the road so they would not bang around.  All the while my head spun with things I still had to do.  In the evening I cooked up all the raw meat from the freezer and what we would not eat until Wednesday night I portion packed into small plastic containers to feed to the dogs in the coming days. Yes, our dogs eat well!!  The outside temperatures had already dipped below freezing so we turned on the propane heater in the camper during the day to make the work inside a bit more pleasant, but I had to wear a jacket for the short walk from house to camper, because I didn’t want to risk catching a cold.  While I was busy with packing, Benno had his own chores of last minute preparations around the trailer, house and garage. He checked and topped up some tire pressure on the truck and travel trailer, because in cold weather the tire pressure shrinks, he also torqued all the wheel nuts.

Finally, after shutting off the water to the house down at the street, draining the house water pipes and the hot water tank on Thursday morning (as a precaution should the power go out in the winter for any length of time so water would freeze) we got into the truck and headed for the Ambassador bridge at the USA/Canada border by Windsor, Ontario and Detroit, Michigan some 30 miles/50 km away.  There was lake snow forecasted but the roads were dry and the temperature was –6C/21F. Traffic was light driving into Windsor and only a few cars were lined up at the border control. We were asked if we had anything to declare, which we didn’t, and if we had any fruit, vegetables or meat with us.  I said we had Clementine’s, grapes, carrots, a melon and some cooked dog food.  The officer said the Clementine’s were not allowed and he would go into the camper and take a look into our fridge.  When he came back out smiling and empty handed he said that it was ok because I had peeled all the Clementine’s so they were admissible and the grapes were in the original package from California. He wanted to see our truck and trailer registration papers in addition to passports and our two dogs vaccination certificates. Then we were free to go.

Relieved that we had a hassle free border crossing we headed for the I-75 highway.  The next goal was to fill up the truck and spare jerry cans with gasoline because the fuel is considerably cheaper in the USA than in Canada.  Benno had preprogrammed the GPS with the location of a gas station with the cheapest fuel cost as per “Gas Buddy” but the morning rush-hour traffic was in full swing and being unsure how much extra time it would cost us to drive there he changed his mind when he saw the “Pilot Station” gas price display which was $2.07/Gal. Besides, with our “Good Sam Club” membership we get a discount at Pilot Flying J and Camping World and ended up paying only $1.929/Gal. Filling up during cold weather is not very pleasant and I am glad Benno is doing this job and not me. 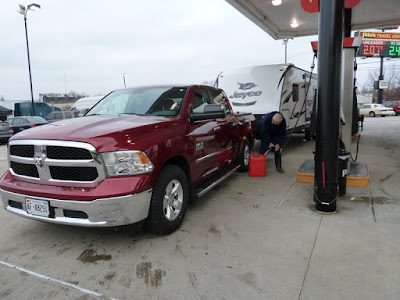 As we were driving along on I-75 past Detroit with heavy traffic toward Toledo it started to snow and the wind picked up swirling the white stuff around the highway.  On the opposite site of the highway I saw blue flashing lights, a pileup of trucks and cars in an accident and the north flowing traffic having come to a standstill with vehicles backing up as far as I could see.  Benno was driving cautiously at about 48/mph because the highway seemed to have icy patches and the snowing was increasing. All of a sudden a transport truck passed us at a breathtaking speed, must have been doing more than 70 miles, which sucked our travel trailer over and we started to sway. Oh my God, I feared for the worst and thought our trip was over.  Benno knew he had to throttle up to pull the trailer ahead and not to use the brakes (which impulsively I would have done) and so he averted a possible disaster but our nerves were on edge for a while until we stopped at our favorite “Aldi Supermarket” to purchase some Marzipan Stollen (German imported kind of Christmas fruitcake) and a few other German imports for our trip down south.

With the stash of goodies packed away we were soon again on I-75. The snow flurries had stopped and the roads were clear. However, there is considerable work done on this stretch of highway and three lanes are sometimes reduced to two very narrow ones with concrete barriers so close to the road that a truck with a wide load would have had to use both lanes to make it through.  We were driving on the right lane and there were stretches so tight that I instinctively held my breath.  I said to Benno that I was glad he did the driving and he responded, “I would have liked it if you did the driving so I could look away!”  Later on he said, “If my hair wasn’t already grey, I think it would have grown some now.”  After some time on the road I wondered if a rest area was coming up and looking through the pouches in the truck I asked: “Where did you put the I-75 Guide?”  A moment passed and he quietly said, “I didn’t, it’s back home in the bookshelf, sh..t.”  Oops!  We had purchased the newest edition especially for this trip, as this guide is a HUGE help driving up or down the I-75 as it gives a detailed account mile per mile starting in Detroit and ending in Florida of everything along the highway.  That really sucked! (Pardon me)

Taking our time driving, making frequent stops for us to stretch our legs and giving the dogs a chance to do their business, we made three overnight stops.  One at a Camping World parking lot with some highway traffic close by, one on a rest area parking lot along I-75 together with a pile of transport trucks that ran their APU’s all night long to keep their cab cozy (it was bloody cold for sure) right next to our bedroom and the last one at a 24 hour Walmart parking lot that was not too bad. 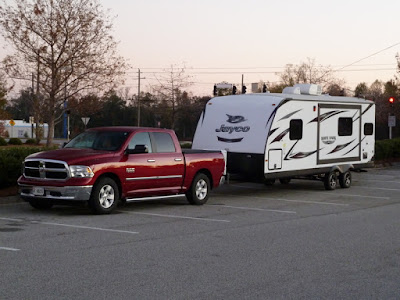 We arrived at our campground at the “Wandering Oaks” in Ocala, Florida at 9 a.m. on Sunday morning together with two other RVs that had passed us on the highway.  For now we are settled in but are still working on our wifi connection.  As a side note, when Benno asked me where I had put his electric Braun shaver, I said: “I didn’t.” Oops!  Somehow I missed packing it and it is probably lying next to the spare one at home.  Thanks to Walmart we now have another spare one (Philips). 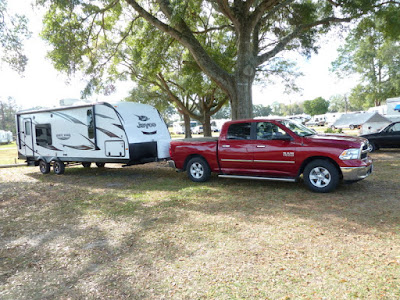 parked at the campground in Ocala

Stay tuned for more writing.  Today it’s mostly sunny with temps of 80F/26C and we need a little down time.

Posted by Marlene Klopfer at 15:48