Varoom outside our window

Todays post is for all the motorcycle enthusiasts among our blog readers.  Personally, I do not know much about them, but occasionally some gleaming or unique machines catch my eye.  This afternoon the sound of a deep pulsating motorcycle engine pulling in-between our trailer and the next rig made us instantly get up from our reading to look out of our windows to find out what created that sound.  A one-off looking motorcycle with a truck bed permanently mounted behind parked a few feet away. 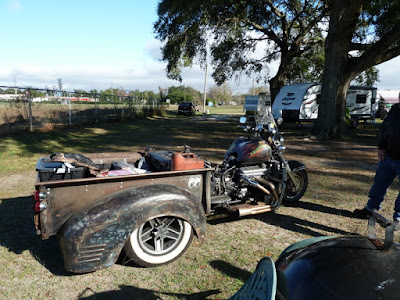 Curiosity overcame my shyness and I followed Benno out to have a look at this novelty of a motorcycle and to talk to the guy riding it.  I introduced myself and he said his name is “Snake” from North Carolina, but he is living now nearby. He came to visit his long-time friend who is also a motorcycle owner and occupies the trailer next to us but I think he came to show off his brand new and expensive looking leather jacket from Harley Davidson. 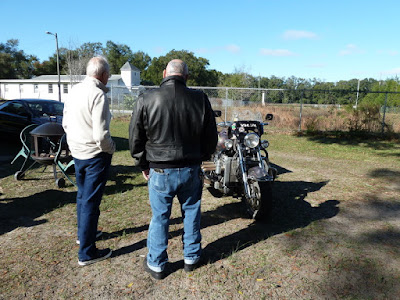 Right away I was invited to try out the motorcycle seat, which came from an old harvesting tractor.  The handlebars were way too far forward for me to even think I could steer such a thing. Snake explained that this motorcycle had a 350 Hp V8 Chevy engine and that the rear axle came from a Chevy Camaro.   The tilting truck bed was from a 1946 Dodge pick-up truck and had been mounted to this custom welded frame. Would you call it a pick-up bike? 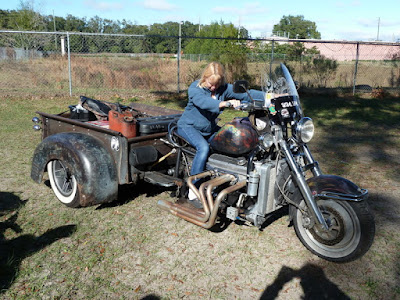 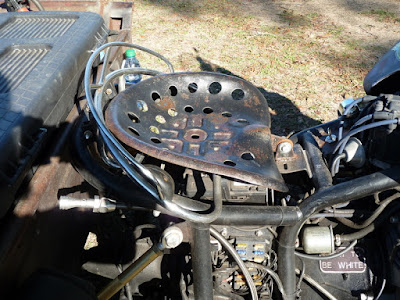 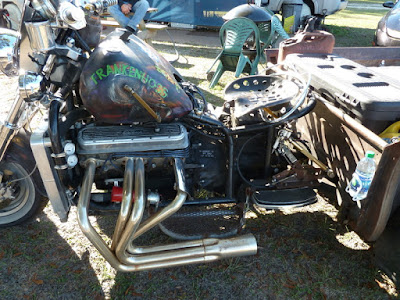 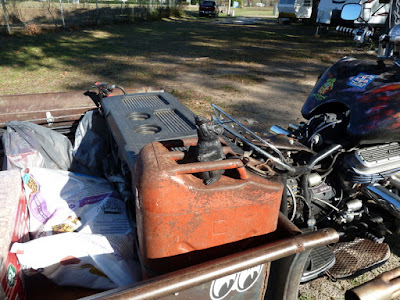 There were many unique details on this bike. Because the fuel tank held only a capacity for about 90 miles, he carried a jerry can (the red canister with the mouse on top) so he would not be stuck for the third time! (He did run out of fuel twice) Benno pointed to a metallic gadget mounted on the left side.  It turned out to be a complete tattoo-machine, he had all the needed paraphernalia to do tattoos in the box on the truck bed. Snake asked if I wanted a tattoo around my nipples, he would do it for free! I declined with a smile!!! He used to have a tattoo parlor in North Carolina. 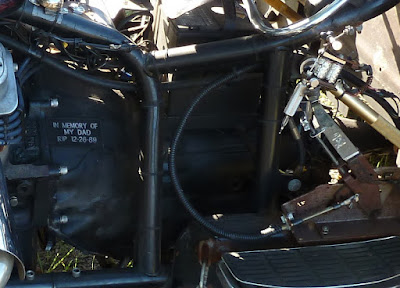 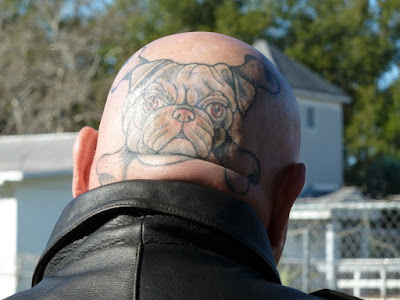 That was a nice distraction from an otherwise none exciting day other than our run into town to get some groceries and propane for our barbecue.  Lets see what tomorrow brings.

Posted by Marlene Klopfer at 18:30