It sounds like a movie, doesn’t it? You probably all know that we had a terrible weather forecast here in Florida for yesterday with high winds, storm cells with lightening, nasty downpours and a tornado warning. Yep, it happened, no tornados but during the night the rain drummed a staccato on the trailer’s roof and the wind gusts buffed the trailer.

That storm here in Ocala brought down quite a few branches from the old Oak trees that adorn our RV park.  I kept my fingers crossed that our trailer would be spared of any large branches that kept crashing to the ground all around us.  Thankfully they all landed elsewhere with only a couple of lightweight branches landing on our roof. 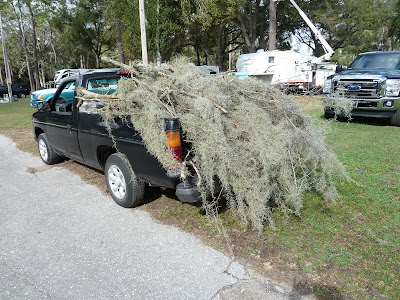 So today Art, our RV Park host, and Bobby, his right hand man, had their hands full to clean up the aftermath of debris. It appeared that there was a stubborn branch dangling precariously over a parked fifth wheel by just a few strands.  Just recently the RV Park had acquired a new bucket truck to use throughout the park.  That bucket truck came in handy today to hoist someone up into the trees to remove that branch. Okay, lets stretch the name “new” a little; it was a new addition to the park’s inventory, but a well used utility bucket truck from the state of New York and not a spring chicken anymore. 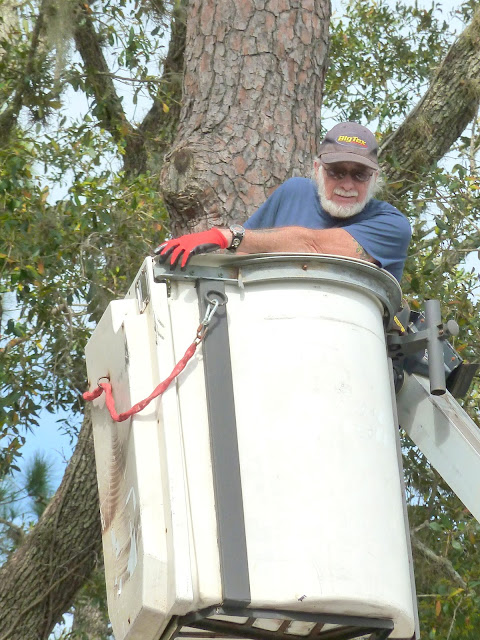 The lucky guy to get the job was Art, the RV Park host.  The bucket truck was driven into position and in short order Art, now in the bucket, hoisted himself up by activating the lever in the bucket.  But wait, not all the way up, because all of a sudden the hoist stopped.  Now what?  When I passed by the bucket truck quite some time later, three guys were desperately pooling their brain power together trying to fix this problem.  Soon they had more onlookers and RV residents trying to help with suggestions, but apparently fuses in the truck kept blowing out.  After a while standing there I decided to go home to our trailer to make lunch thinking that the guys had this in control. 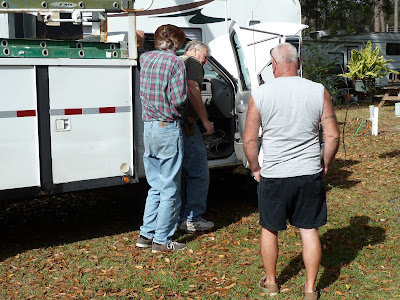 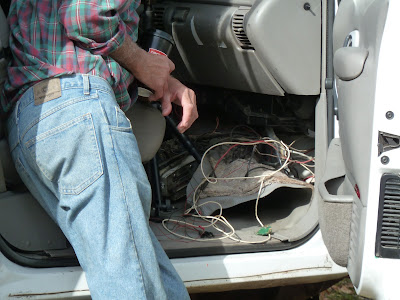 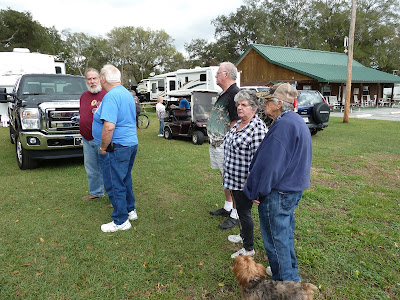 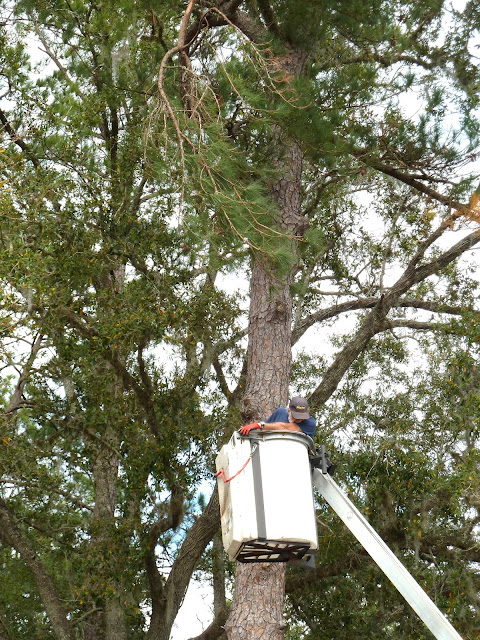 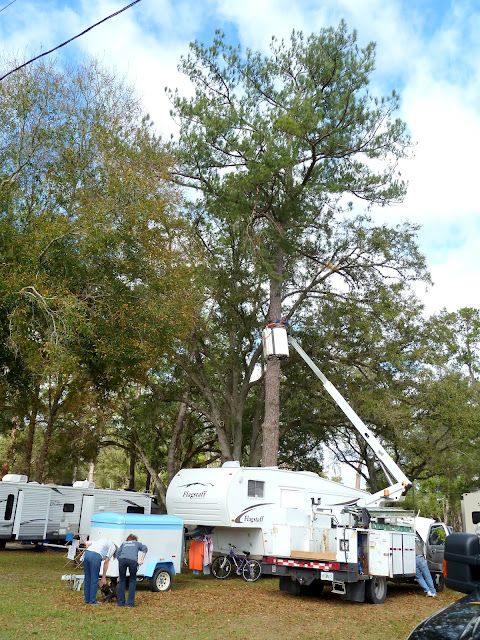 After eating our lunches we were surprised to hear the siren of a fire truck coming into our RV Park yet again (they were here a couple of weeks ago) I went to see what was happening.  All the while we were having lunch at our trailer, poor Art had been stuck up there in the bucket that wouldn’t budge.  I was told that there was an attempt made to get him out the bucket by telling him to rope down, but Art himself as well not a spring chicken anymore, did not like that at all, it could have ended in a disaster and the idea was abandoned. The truck’s electrical issue stayed persistent and Art was getting itchy so someone suggested calling the fire department to get Art down but he wouldn’t hear of it.  However, dark ominous clouds were appearing in the sky and it looked like it could be raining soon. Art noticed them too and said: “Ok guys, go and call the fire department.” 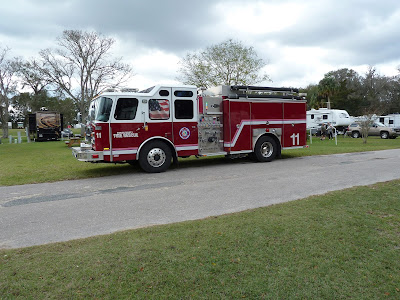 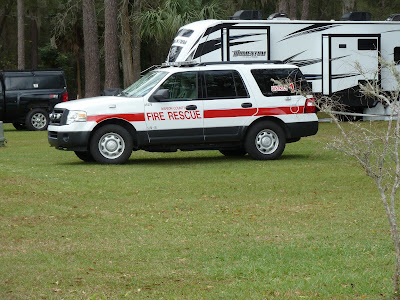 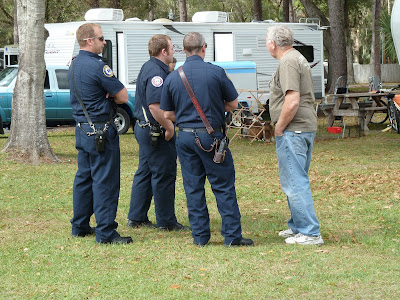 The pictures should describe the whole event.  Once Art was safely down with the assistance of the nice fellows from the fire department you should have seen his smile.
And the guys got the job of cutting off the culprit of the dilemma done too! 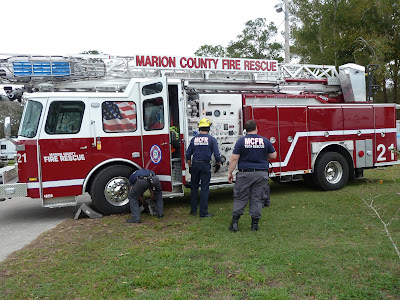 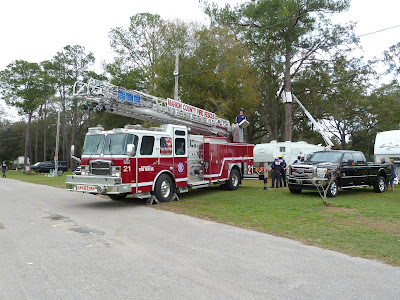 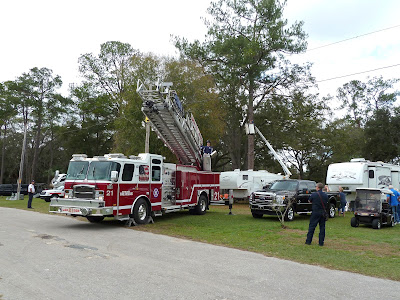 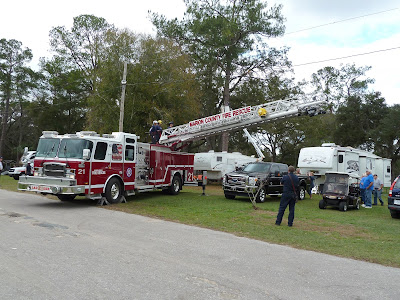 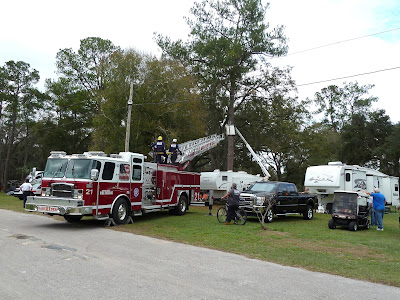 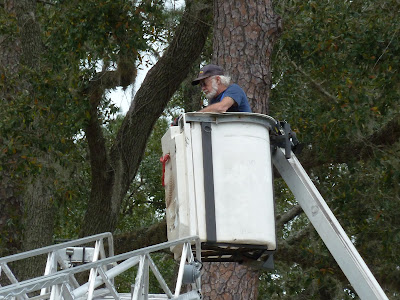 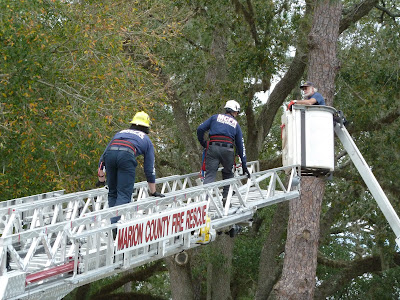 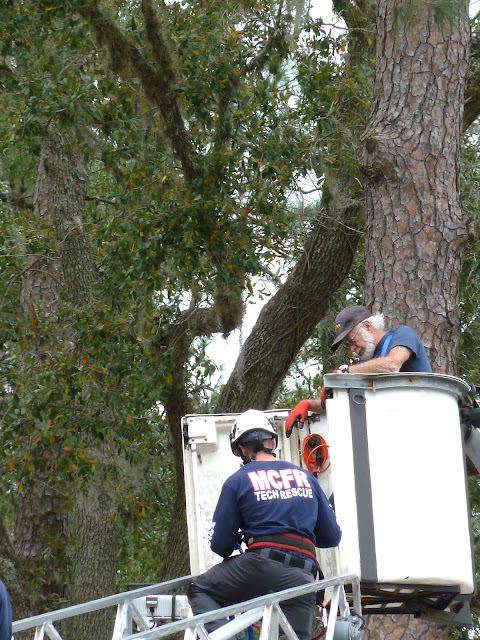 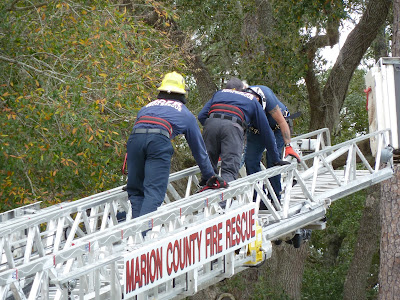 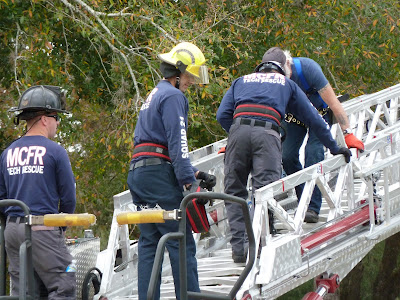 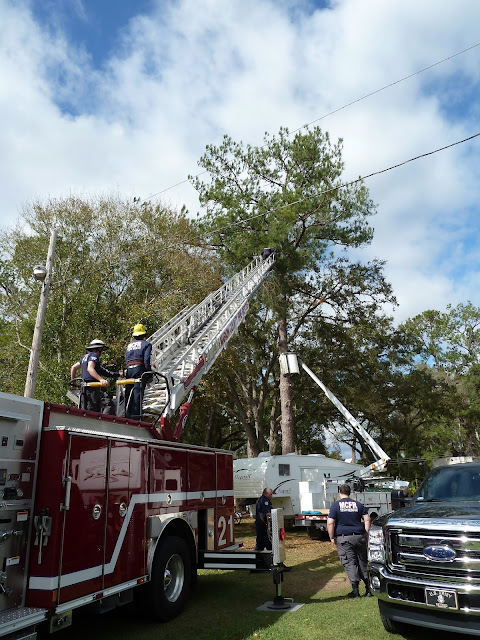 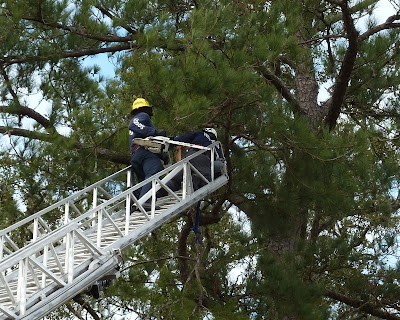 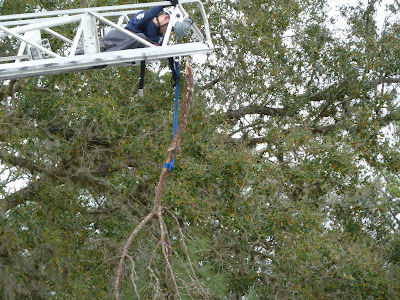 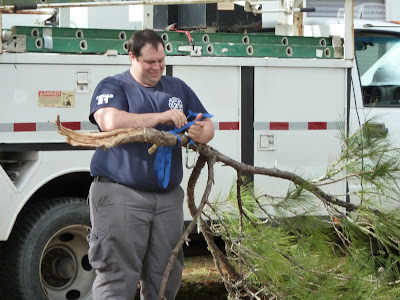 Posted by Marlene Klopfer at 18:27