Fire at the RV Park

It’s a scary sight to see a plume of smoke rising from the roof of an RV.  That is exactly what happened yesterday afternoon while we were sitting over our cups of coffee and polishing off the last of our delicious European cookies while glancing out of the side window.  I noticed smoke wafting across the row of 75 yards away-parked fifth wheels and motorhomes.  My first thought was of someone having a campfire, but it was way too early for that.  I’d seen a rig being washed before and the spray and mist of the pressure washer making it look like smoke, but I ruled that out and I said to Benno to go out quickly and run over to investigate to see if in deed it was smoke and if our help was needed. 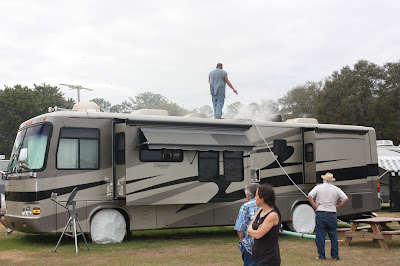 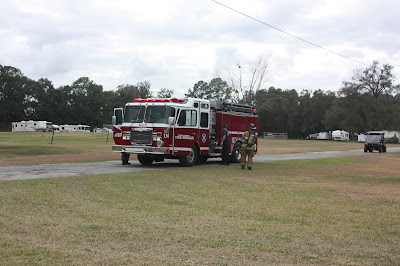 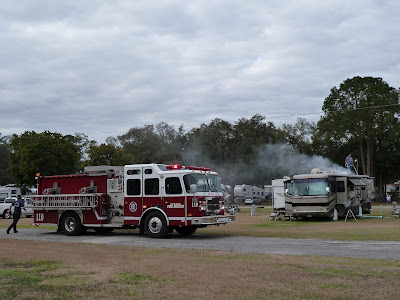 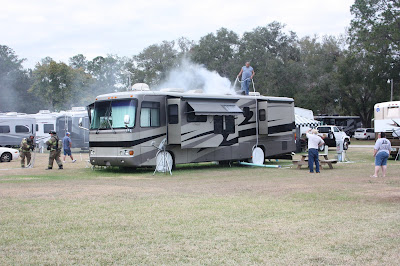 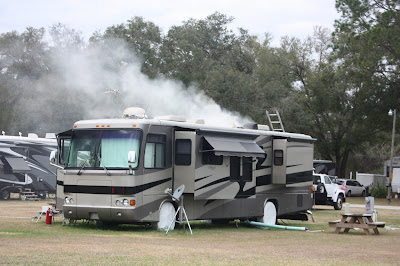 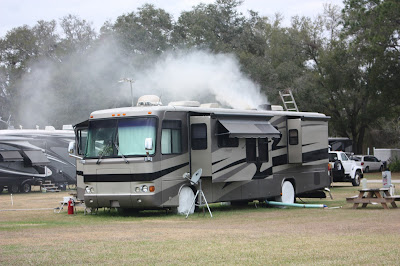 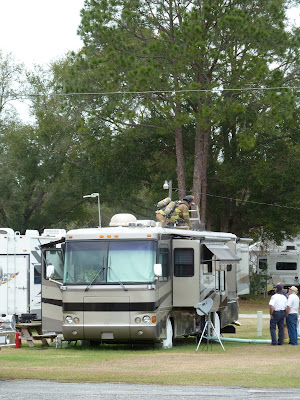 Yes, there was a fire going inside of one of the parked motorhomes and a fellow RVer had just gotten on to the rooftop with a garden hose to spray water into a vent beneath him.  Several people had gathered around watching helplessly as more and more smoke and a flame billowed out of the now busted rooftop vent.  The owners of this 2004 Safari CHEETAH motorhome were outside as well looking upward where the smoke wafted around the roof.  Within minutes I heard the siren of a fire truck approaching.  (They came from the Marion County Fire Department and Art Sarrach, our RV Park Host rushed with his John Deere Gator to the Park entrance to guide the fire truck to the motorhome.)  As soon as the fire truck stopped on the paved road in front of the motorhome the firemen rushed out setting up a long fire hose while another fireman ran to the rig with a fire extinguisher.  The fire crew went on quickly about extinguishing the fire, but there was more smoke before the fire was out.  In the meantime another fire truck had arrived followed by a water truck and the fire chief in a separate car. 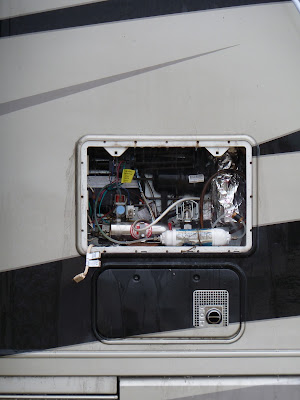 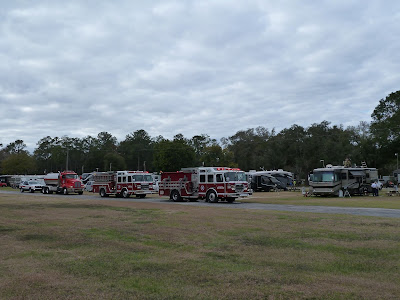 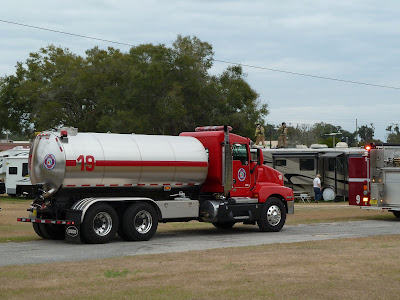 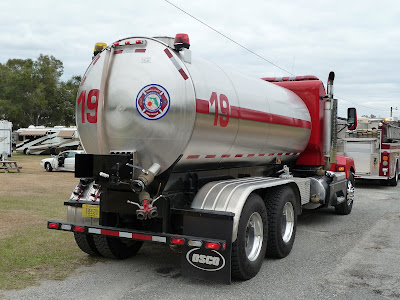 So what happened?  Today I talked with the owner of the motorhome.  He and his wife were sitting inside when they thought they smelled burning electrical wire but they could not see anything burning so they went outside to have a look and see what was burning. That was when they discovered that there was smoke coming out from the roof of their rig.  There was nothing they were able to do but to call the fire department.  The fire had started in the vicinity behind the Norcold Gas Absorption Refrigerator.  According to the owner, the electric heater element of the fridge did not shut off and that started the fire. This Diesel Pusher Safari CHEETAH   motorhome with a CAT 330 hp motor is 12 years old and had a warranty issue with the refrigerator, which was dealt with some years ago. By the time the firemen were finished, wall panels and rooftop liners were torn out in order to get to the source of the fire and hot spots.  There is extensive destruction inside in addition to smoke and water damage.  The owners stayed in a motel overnight and today they were waiting for the insurance adjustor to come for an assessment. Their insurance is giving an allowance of $750 for hotel expenses but I presume it will be a lengthy process to either fix or replace this beautiful motorhome.
Later, when Benno talked to the owner he was told that they had just recently done several upgrades to the rig including all new Michelin tires.  With tears in his eyes the owner told Benno that they are full-timers and they do not have a place to go to.

This was a very sad and scary incident that motivated me to search the Internet about RV fires.  Apparently there are over 6000 RV fires annually and refrigerator fires cause half of those and most of the fires occur while being stationary.   My goodness, that is an awful statistic.  I shudder at the thought of what might have happened if the owners had been away from the RV Park when the fire broke out.

Posted by Marlene Klopfer at 14:41