“Making a major improvement to the electrical household of our RV”
I noticed when picking up the Jayco Jay Flight Swift 198RB travel trailer from the dealer in Smithville, Ontario last year, it had a brand new battery in a plastic box mounted on the trailer’s tongue (hitch fork). A closer inspection revealed a so-called wet cell Group 24 Starting and Deep Cycle Battery of 70 amp. As a perfectionist and techno maniac I came quickly to the conclusion this would not do it, this is Mickey Mouse.
A: This battery is, when it really boils down to the “Nitti Gritty” a mislabeled starting battery. What I need here is one or more 100% deep cycle batteries for slow discharge, while on battery power, watching TV and have lights burning all night long.
B: Maybe have enough 12-volt amps to power a decent size inverter for getting 120 volt without dragging the 120 V Honda generator to the outside to run a toaster or coffeemaker in the morning etc. while on a short stopover for a night.
C: Forget the old-fashioned wet cell batteries and go for AGM batteries instead.
D: Here is room for improvement, as well the chance of spending some serious money and the possibility of using my tools:)) 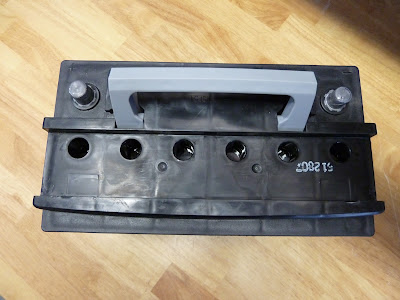 Why AGM batteries?
12 Volt wet cell batteries are the second oldest types of batteries in use, invented 1859 by a French physicist Gaston Plante and they consist at the present time of lead antimony plates submerged in sulfuric acid electrolyte, contained in a strong plastic housing with 6 cells (each providing 2 VDC) and vent caps on the top to let the generated gas escape when they are being charged. These caps permit the service expert during maintenance to add or replace the electrolyte, or for you to water the battery. The out the vent caps escaping gas is very corrosive, explosive and dangerous. A wet cell battery under the hood of a car gets plenty of air from underneath of the car during driving which helps to disperse the gas safely. Wet cell batteries inside of a RV should be mounted in a battery box with covers. The covers must have a provision for attaching a vent hose, which is guided to an outside vent to disperse the gas.
Does this sound simple to you? You have to water these wet cell batteries frequently, disperse of the dangerous gas and on top of this, you can totally discharge these batteries via long storage (they loose up to 20% capacity each month when dry stored). Lets say, the RV is stored 6 months without any means of charging; the batteries could be toast and you have to buy new batteries. Times have changed, now here in the year 2015 there are better choices for the RV and boat owner, much improved and safer batteries are on the market. The leader at this time for RVers and boaters is called AGM battery. 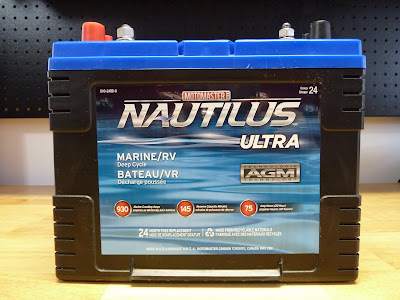 AGM battery stands for Absorbed Glass Mat. The electrolyte is absorbed into boron silica fiberglass mats, which are wrapped around specially ratio lead-calcium plates and hermetically sealed into the celled plastic housing. The technology was developed 1985 for the military fighter jet aircraft, but the first AGM cell batteries were patented by the Gates Rubber Corp. in 1972. AGM batteries can have flat or spiral form rolled lead-calcium plates. They are totally maintenance free, don't gas while being charged, can be mounted in any position and charged by any off the mill automotive charger. Of course this is not recommended. To charge this type of battery I would use a smart charger, a so-called 3-stage or 4-stage charger. These chargers will never cook your batteries. Cooking any battery is a mess and dangerous. Cooking is the term for overcharging with a manual or a faulty charger.
If you have a large solar panel array, a smart solar controller is a must. The same applies if you have a wind generator. AGM batteries can accept a charging rate of up to 40% maximum of the battery bank capacity (more than one battery hooked together to the same 12 volt circuit is called a battery bank). For instance: you have 3 AGM batteries, each 100 amp, you could use a 120 amp smart charger to charge your bank. AGMs are dual-purpose batteries and can serve as starter and deep cycle storage batteries. During long time storage AGM batteries loose only 2 to 3% a month of their charge, a very important factor for the seasonal RVer and boater. If, in case your AGM’s have somehow experienced a total discharge, they are not toast and throwaways like the discharged wet cell batteries. You can with a smart charger recharge AGMs to the full capacity. 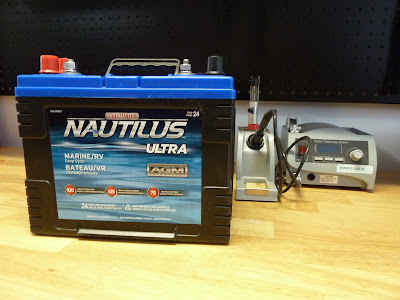 Stay tuned for a follow-up of the actual installation.
Posted by Marlene Klopfer at 19:26