After we got settled in at the Tombstone Territories RV Resort the question popped up, “Where do people go for shopping?” Sierra Vista, (Spanish for “Mountain Range View”) is the next largest city from the RV Park here in Cochise County, Arizona and approximately 15 minutes away by car, we were told.

A swift drive through the main roads revealed a super clean and modern city. Major box stores and plazas indicated we would probably find everything and more here shopping wise and it being a U.S. Military town, half of the population is working in the government sector. Our shopping list was small and the Walmart Superstore had what we needed.  On the drive back we noticed the entrance to the Fort Huachuca, another reason to return here.
Next day afternoon, while I was browsing the Internet, an email comes in from long time friends Sue and Rick.  We hadn’t seen nor heard from each other for a long time, actually since we departed 2008 at the Panama Canal, and the last we knew was that they had sailed their boat “Panacea” to the Marshall Islands, Pacific, where Rick had found employment with the U.S. Army. The email read: “We have moved and bought a house in Sierra Vista, AZ, it comes with an RV pad and full hook-up.  If any of our friends are ever in the area, you’d be welcome to visit!”  I couldn’t believe what I read and my mouth must have stood open.  My immediate email reply to Sue: “Is this the Sierra Vista, AZ where I just went shopping at Super Walmart?” must have caused her to fall off her chair.
Needless to say there were celebrations ahead and lots of catching up to do! 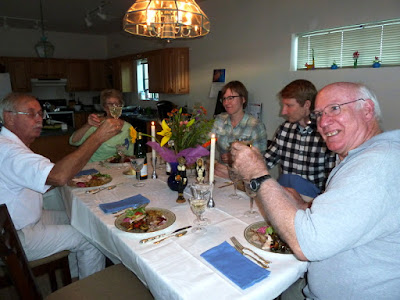 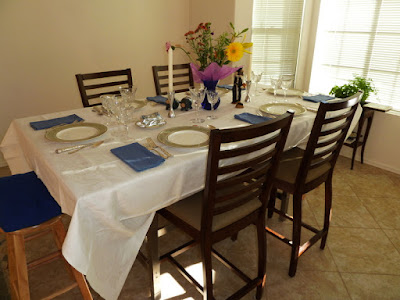 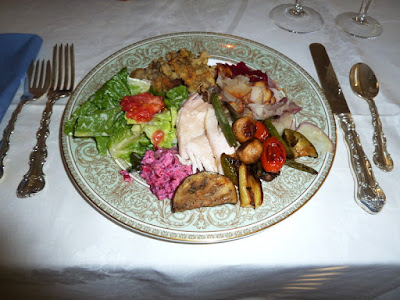 Have you ever thought that a cemetery could be a tourist attraction?  Let me tell you about the Boothill or Graveyard, located just before you enter the town of Tombstone, AZ. The entrance to the graveyard is now through the souvenir store.  Back in the days of silver mining, when Tombstone was bigger than San Francisco, the name Boothill was a common name for burial sites where folks who died “with their boots on” where laid to rest. Although we found this cemetery to be neglected, the engravings of the headstones are what make this graveyard unique.  The three famous men, Billy Clanton, Frank McLaury and Tom McLaury, from the Gunfight at the O.K. Corral are buried here as well.  Johnny Ringo managed to escape, but I will tell you about him in another recap later. 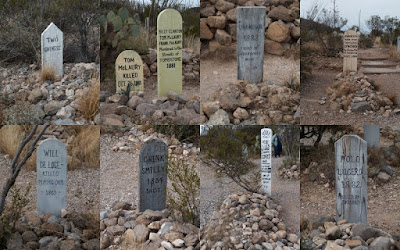 Just so if you are unable to read the inscriptions on my pictures, here are some quotes:

Unknown 1882
Found in abandoned mine 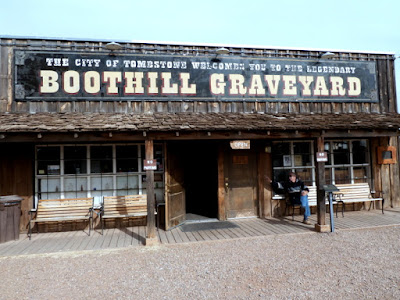 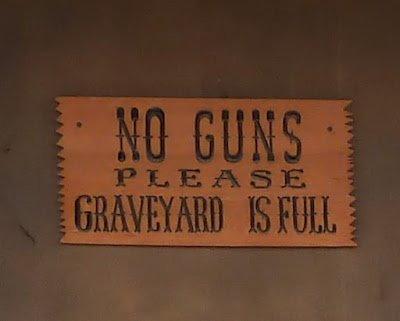 Posted by Marlene Klopfer at 16:25