The drive from the TT RV Park to our next destination of Texas took us along Hwy 80 to Hwy 9 via Columbus, New Mexico.  The road runs for a long stretch along the Mexican border, which we found to be almost deserted of traffic except for the occasional Border Protection Control vehicles patrolling especially along Hwy 9.  Somewhere down that stretch, about 39 miles past Douglas, we spotted a monument by the roadside. To us his seemed to be a good spot to stop for lunch and to stretch our legs. 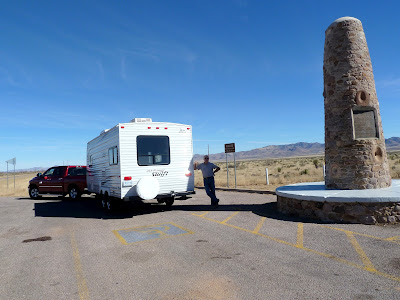 I have copied the inscription of the plaque in case my picture is not readable. 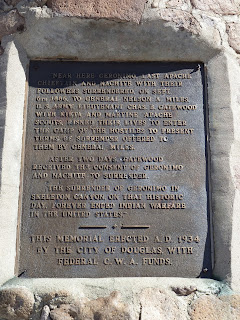 .
“Near here Geronimo, last Apache
Chieftain and Nachite with their
followers surrendered, on Sept.
6th 1886, to General Nelson A. Miles,
U.S. Army, Lieutenant Chas. B. Gatewood
with Kieta and Martine.
Apache scouts risked their lives to enter
the camp of the hostiles to present
terms of surrender offered to
them by General Miles.
After two days, Gatewood received the consent
of Geronimo and Nachite to surrender.
The surrender of Geronimo in Skeleton Canyon,
on that historic day, forever ended
Indian warfare in the United States.”

This Memorial erected A.D. 1934 by theCity of Douglas, with Federal C.W.A. Funds.

During the long drive that seemed to be endless, we discussed where we would park for the night.  Along the Mexican border would probably not be a good idea. Serious drug and illegal human smuggling is happening here. The buggers are extreme dangerous. We were considering to stop for the night at the U.S. Custom and Border Protection's lonely Camp Ramsey, but noticed they were barb wired and electric gate forted in. However, the city of Columbus NM, which is located on the intersection Hwy 9/11 offered a few possible sites for us to check out.  Right by the roadside we noticed a row of flags and a sign to a museum on a previous military campsite, now a State Park with RV and camping park on the park's property. Most of the buildings of the military installation have disappeared over the years, but the original fort’s guardhouse still stood with a visitor’s center, small museum and a few relics on the property.
We parked and went inside where we found out that the timing of our arrival was near the closing time therefor cutting our museum’s visit a bit short by giving us only a half hour to tour the exhibitions.  However, I learnt a little bit of history: 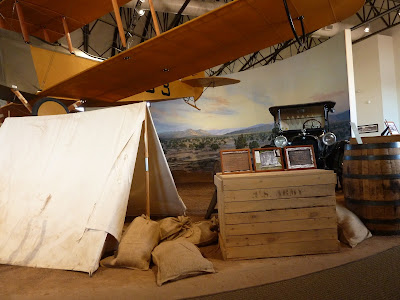 Columbus came to fame March 9, 1916 when the United States was the last time invaded by a foreign army aka Pancho Villa’s raid on Columbus NM. Only a week later, about 10,000 troops arrived by train ordered there by the President Woodrow Wilson with General John Pershing for a “Punitive Expedition” into Mexico. This was “The Last Ride of the United States Calvary” on horses. Young George Patton, who was promoted while he was there to First Lieutenant, let a mechanized transportation and tank division. 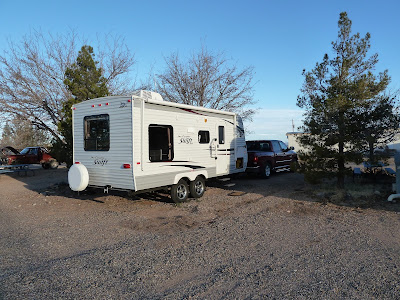 The rest of the afternoon we spent to set-up our trailer and relaxed.

Posted by Marlene Klopfer at 16:32